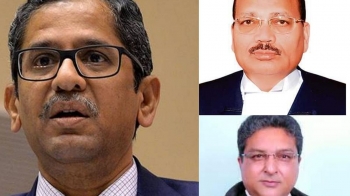 CRIMINALISATION OF POLITICS : Criminals in politics versus “innocent” undertrials

Those of us who are keen on clean politics must have reason to be happy about what the Supreme Court did on August 10, 2021.  In an unprecedented step, the Court fined political parties for not abiding by its order of February 13, 2020.   While BJP, JDU, RJD, LJP, INC, CPI, and RLSP were directed to pay fines of Rs 1 lakh each, CPM and NCP were fined Rs 5 lakh each, “since they have not at all complied with the directions issued by this court”.  BSP was an exception, as it substantially complied with the SC’s mandate and escaped getting penalized.

According to the 13 February 2020 order, the political parties were expected to upload in their websites, details of criminal cases pending against each candidate contesting in the election, as well as to publish in the media, so as to enable the people to make an informed choice.  The judgement came on a plea filed by Advocate Brajesh Singh, who sought contempt of court proceedings against leaders of political parties as well as Chief Election Commissioner for allegedly flouting the court’s orders in the run-up to the 2020 Bihar Assembly polls.

On August 10, 2021, the Supreme Court bench, headed by Chief Justice N.V. Ramana, and comprising Justices Vineet Saran and Surya Kant, issued another momentous direction that no state government can withdraw  criminal cases pending against MPs, MLAs and MLCs, without the prior approval of the concerned high courts.  The Court took strong exception to the moves by Uttar Pradesh, Maharashtra, Karnataka and Uttarakhand to withdraw criminal cases against their politicians.  UP, for instance, sought to withdraw 76 cases, including the politically sensitive Mazzaffarnagar riot cases involving the notorious criminal politicians like Sangeet Som, MLA from Sardhana-Meerut, Suresh Rana, MLA from Than Bhawan, Kapil Dev who represents Muzzaffarnagar Sadar and political leader Sadhvi Prachi, all BJP leaders.  The Uttarakhand government has moved to withdraw a murder case against MLA Rajkumar Thukral.  Similarly, the Karnataka government has moved applications for withdrawal of 61 cases against legislators and the Maharashtra government has also taken similar steps.  The direction was issued after amicus  curiae Vijay Hansaria’s report highlighted a disturbing trend  of states attempting to misuse section 321 of criminal procedure code to withdraw even serious cases against ruling party legislators.

Referring to a recent SC judgement, which had laid down guidelines for a public prosecutor for withdrawal of prosecution while setting aside Kerala government’s decision to withdraw cases against Left party MLAs for vandalism in the assembly, the court directed that no prosecution against MPs/MLAs/MLCs can be withdrawn without the approval of the HC concerned.  The bench requested the high courts to examine the efficacy and public interest involved in the applications by public prosecutors for withdrawal of cases against sitting MPs/MLAs/MLCs.  It also agreed with Hansaria’s suggestion and ordered that except in  an emergency, a judge presiding over Special Courts, set up to conduct trial of criminal cases against sitting and former legislators, would not be transferred out till further orders from the apex court.  Though the Enforcement Directorate scrambled to file at the eleventh  hour a list of cases pending under the Prevention of Money Laundering Act (PMLA) against sitting and former legislators, the bench expressed serious reservation about  the Centre’s intent towards expeditious investigation and trial in these cases.  The SC’s disillusionment with the Central Government is clear from the following  statement : -

“If the central agencies are reluctant to file even the status reports of pending cases, what should we presume?  We have already expressed our displeasure (about lack of seriousness on the part of the Union government) on a number of occasions.  We cannot say anything more.  But we can presume certain things”.

Growing criminalization has been a constant theme in Indian politics.  According to the Association of Democratic Reforms (ADR), 2333 MPs in the current Lok Sabha are facing criminal charges, up from 187 in 2014, 162 in 2009 and 128 in 2004.  The Supreme Court remains sceptical about the legislature taking concrete steps to solve the problem.  This scepticism is quite natural.  Political parties in India have always been notoriously reluctant to introduce changes to combat criminalization, and the excuses they have given for doing so have remained nearly unchanged for a long time.  They cite two major excuses.  “Winnability” of candidates is the first reason.  But this is a dubious logic and is an attempt by the party to absolve itself of all blame and put the onus of sending a criminal politician to the assembly or parliament solely on the voter.  The other reason offered by the political parties flows from the oft-quoted maxim of Indian law – ‘any accused is innocent until proven guilty’.  And they parrot that such accusations against any candidate arise from “vendetta politics”.   There is some merit in this argument.  Former Chief Election Commissioner, Shri S.Y. Quraishi, in an article (Crime and politics, the Indian Express 13/8/21) has pointed out the fallacy in this argument by citing a paradox: “There were 4.78 lakh prisoners, as of December 2019, of whom 3.30 lakh were under trial, i.e. not yet proven guilty.  Yet, their fundamental rights – their right to liberty, freedom of movement, freedom of occupation and right to dignity – are curbed completely. I have posed this question on various fora, where honourable judges and eminent jurists were present.  Nobody has ever explained this paradox to me…………..Even a peon cannot be appointed if even a minor criminal case is pending against him. But a person chargesheeted for murder or rape can become a legislator and even a minister!”.

Under the circumstances, criminals will continue to thrive in politics, since all political parties take advantage of the maxim of “innocent till proven guilty”.  If so, cannot the 3.30 lakh “innocent” undertrials, referred to by Quraashi be released?   It is time that the Government and the Election Commission thought of incentives for decent, competent gentlemen to contest elections.