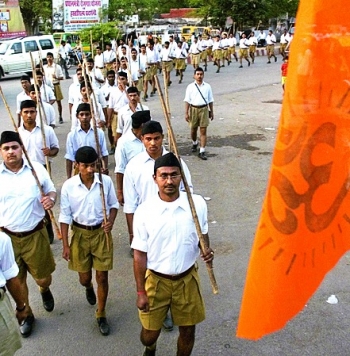 Plenty are the signs to show that India has become a de facto Hindu Rashtra, although the basic structure of the Indian Constitution is not changed and India is not officially declared a Hindu Rashtra. Hindu Rashtra, a nation based on the majoritarian religion, is the goal for which the Hindutva groups have been working assiduously for about a century, particularly since 2014. The latest sign is the remission of life imprisonment of 11 persons convicted of gang-rape and murder in the Bilkis Bano case and releasing them from jail on the 76th Independence Day of India, the day on which Prime Minister Narendra Modi spoke eloquently on Nari shakti and the need to respect women. It was indeed shocking to see the gang-rapists and murderers were given heroes’ welcome with garlands and sweets.

Although newspapers wrote editorials against the decision of the Gujarat government and a few NGOs and civil society organizations protested by sending open letters to the Supreme Court, the response of the people in general was mute, compared to the nation-wide protests in the Nirbhaya case in 2012. The response of the government and the judiciary was quick in the case of Nirbhaya: all the accused were arrested and four adult-accused were sentenced to death. When there was a delay in the execution of the death penalty due to the appeal to the President on mercy ground, there was a hue and cry from the public and finally the four adult convicts were hanged to death on 20 March 2020.

When the Supreme Court lawyer Indira Jaising had requested Nirbhaya’s mother to pardon the four men in death row, she said, "The whole country wants the convicts to be executed. Just because of people like her (Indira Jaising), justice is not done with rape victims."

What should have been the response of people to the release of 11 convicts in the Bilkis Bano case? Although the Bilkis Bano case is more horrible than the Nirbhaya case, the reaction of the public has been mellowed. It appears that the culprits and victims are seen through the prism of their religious identity.

The foundation of justice and the core of democracy is the Rule of Law. The reason for the remission of life imprisonment given by a BJP MLA from Gujarat, who was on the panel that recommended remission to the 11 rapists, is rather appalling. According to him, some of the convicts in the case are “Brahmins” with good ‘sanskaar’ or values and it is possible they may have been fixed due to their past family activities. Such arguments are diametrically opposed to the Rule of Law. It means in the Hindu Rashtra an accused will be judged not based on the gravity of his/her crime but on his/her religious or caste identity. This kind of reasoning reflects vividly the outlook of Manusmriti, which is recommended by the Hindutva groups as the basis of Hindu Rashtra’s Constitution.

It is very clear that the BJP government at the centre and in the states are using different yardsticks with regard to justice. The silence of the BJP government at the centre on the remission of the life imprisonment of 11 rapists and murderers and hero’s welcome accorded to them is clear sign of its discriminatory approach to the minorities, which is a significant character of Hindu Rashtra as envisaged by Savarkar and M S Golwalkar. Golwalkar’s idea of a Hindu Rashtra, in which Muslims and Christians are treated as second class citizens, is being put into practice through the unjust and immoral decision taken by the Gujarat government.

Against this backdrop, it is pertinent to recall Golwalkar’s idea of citizenship in a Hindu Rashtra. “The foreign races in Hindustan must either adopt the Hindu culture and language, must learn to respect and hold in reverence Hindu religion, must entertain no idea but those of the glorification of the Hindu race and culture…and must lose their separate existence to merge in the Hindu race, or may stay in the country, wholly subordinated to the Hindu Nation, claiming nothing, deserving no privileges, far less any preferential treatment – not even citizen’s rights.” The mellowed response of the public to the release of 11 rapists and murderers is also an indicator of the implicit acceptance of Hindu Rashtra by a large section of Indian society.

Another ominous sign is the silence of the central government and the BJP on the draft of the constitution of Hindu Rashtra released by the Dharam Sansad in the second week of August. It was first proposed at the Dharam Sansad held in February in Prayagraj.

According to this draft of the constitution, Muslims and Christians will have no voting rights. Dharam Sansad is an organization of Hindu seers who are ardent supporters of RSS-BJP. Very often the plans of RSS-BJP are revealed through the Hindutva organizations which are often termed as ‘fringe’ groups.

The impunity with which hate speeches are made against the minorities, especially Muslims, by the Hindutva promoters, including ministers, MPs and MLAs is a dangerous sign.  Hate speech and prejudice against the minorities are profusely used to polarize the Hindu votes. Muslims are branded as anti-national, supporters of Pakistan and promoters of terrorism. It is reported that many housing colonies do not allow Muslims to purchase or rent houses. Ghettoization of Muslims is a growing phenomenon in cities and towns of India.

Passing laws that are violative of the core principle of secularism in the Indian Constitution and the failure of the judiciary to take up the cases questioning the validity of these laws, is another sign of the advent of Hindu Rashtra. For example, the Citizenship Amendment Act (CAA) violates the core principles of secularism and equality, as the law provides a pathway to Indian citizenship for persecuted religious minorities excluding Muslims from Afghanistan, Bangladesh and Pakistan. Muslim sects like Shias and Ahmadis also face persecution in Pakistan, but they are not eligible for Indian citizenship, as per the provisions of CAA. The constitutional validity of this law is questioned in the Supreme Court, but the Court has been sleeping over it for more than two years.

The freedom of religion laws and cow protection laws passed by the BJP-ruled states are also discriminatory against the Muslims and Christians. The minorities are often harassed and persecuted by the state and non-state actors by making use of these laws. The cow protection law has been a support and incentive for lynching many innocent Muslims by the Hindutva groups and those who were killed by the cow vigilantes have not got justice. An atmosphere has been created where the right-wing groups can take law into their hands to inflict violence on the minorities, and the police and the judiciary often fail to provide protection to them. On the contrary the police often side with the violators of the law. Is this not a sign of the arrival of Hindu Rashtra?

Another significant sign of de facto Hindu Rashtra is exclusion of Muslims, who constitute 15.4% of population, from the life of the nation.  According to the proponents of Hindutva, one of the methods to be adopted to convert India into a Hindu Rashtra is exclusion of minorities: Muslims and Christians. There is total exclusion of Muslims from the Bharatiya Janata Party (BJP). There is no single Muslim representative of the BJP either in Parliament (Lok Sabha and Rajya Sabha) or in 18 of India’s 28 states where the party currently governs, either directly or through its coalition. The BJP has 301 MPs in the Lok Sabha alone. BJP did not give ticket to any Muslim in 2017 and 2022 Assembly elections in UP, the biggest state of India, where Muslims constitute about 19% of the population.

As a large segment of the Indian population is brainwashed with the Hindutva ideology, people are not able to objectively see the current situation of India. Aakar Patel in his book, ‘Price of the Modi Years’ has convincingly pointed out the downward trend during the Modi government with regard to democracy, human development index, employment creation, individual rights, rule of law, press freedom, women’s safety, civil liberties, corruption and social cohesion.

Whole blame for the present scenario cannot be attributed to the Sangh Parivar. The Congress after Nehru failed to educate people on the Constitution of India, especially secular democracy. It often compromised with secular principles. Even now its stand on secularism appears to be ambiguous. It also failed to practice internal democracy and present itself as a role model of internal democracy. The leadership vacuum haunting the Congress ever since Rahul Gandhi resigned as the Congress president is the result of its failure to nurture internal democracy. Other political parties, because of their vested interests, are reluctant to come together to oppose the conversion of India into a Hindu Rashtra, which will be detrimental to their own existence in course of time.

The disciples of Jesus cannot escape from their responsibility for the current socio-political scenario of India. Recently a social activist-cum-writer asked, if the Catholic Church in India has more than 50,000 educational institutions with more than 5 crore students, isn’t it also responsible for the growing communalism in India?  Why not the millions of students who got educated in these institutions speak against communal polarization, using hate speeches and violence against the minorities? Why do they fail in defending human rights and the core values of the Indian Constitution? Why do many of them join the forces that are vehemently opposed to the Indian Constitutional values and principles?