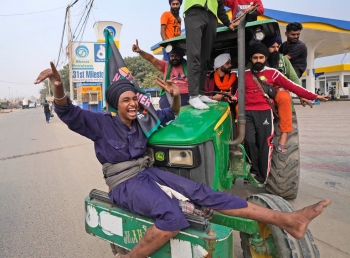 “An election is coming. Universal peace is declared and the foxes have a sincere intent in prolonging the lives of the poultry,” wrote George Eliot, the celebrated literary figure in the United Kingdom, in her second novel ‘Felix Holt, the Radical’ in 1866. She almost prophesized what happened on 20th November, 2021 in India. It is on this historic day, the Prime Minister of India, Narendra Modi, in his televised address to the nation declared that his government had decided to withdraw the three ‘Farm Laws’.

"Today I have come to tell you farmers and the entire country that we have decided to repeal all three farm laws. We will begin the procedure at the Parliament session that begins this month (November 2021). I urge all my agitating farmer companions that today is the holy day of Guru Parab and, therefore, you should return to your homes, fields and to your families. Let us make a fresh start. Let us move forward with a fresh beginning.” This announcement by the Prime Minister brought huge cheers not only to the farmers but to the citizens of this country. Celebrations were witnessed all over. Conscious citizens also joined the kisans in remembering those who gave their lives during the protest.

Historically speaking, the Representation of the People Act 1832 was an Act of the Parliament of the United Kingdom that introduced major changes to the electoral system of England. It gave the right to vote to small landowners, tenant farmers, shopkeepers, householders. Only qualifying men were able to vote and introduced the first explicit statutory bar to women voting. George Eliot captures this fact in the novel that it was not due to the expansion of democracy that the Act was passed but to ensure its hold on the masses by the ruling elite. This is the overarching sense of the citizens of India on the announcement of the withdrawal of farm laws on the eve of the Assembly elections in two most important states of Uttar Pradesh and Punjab.

It is pertinent to view this sudden but calculated move of the authoritarian, autocratic, anti-democratic and anti-people regime from the points of view of Dr. Ambedkar who proposed three parameters to assess democracy in a given situation.

Yogendra Yadav highlights this in the following manner: 1) A theory must set out a norm, an ideal of what democracy should be like; 2) It must evaluate the current state of democracy in the light of its ideal and offer a critique; 3) It must spell out a path to a democratic ideal, from where we stand to where we should aim to be.

Grounding himself on the Indian scenario, Dr. Ambedkar offered a theory of cautious and conditional optimism, an optimism drawn from the abstract promise of democracy and a caution rooted in the Indian context.

Ambedkar pointed out that democracy was “a form and a method of government whereby revolutionary changes in the economic and social life of the people are brought about without bloodshed” (Conditions Precedent for the Successful Working of Democracy, 1952).

Placing equality and fraternity at the heart of democracy, he further stated, “The roots of democracy lie not in the form of Government, Parliamentary or otherwise. A democracy is more than a form of Government. It is primarily a mode of associated living. The roots of Democracy are to be searched in the social relationship, in terms of associated life between the people who form a society” (Prospects of Democracy in India, 1956).

From this perspective the following lines from a social media captures the mood of the citizens of India after the announcement about the withdrawal of the farm laws.

Let nobody fool themselves: a brute majority in Parliament cannot go beyond the will of the people.

A people united will never be defeated!

The announcement by Narendra Modi surprised everyone beyond limits. There are many interpretations of this move by those who stood by the kisans and opposed these draconian laws. Swati Chaturvedi, writing in NDTV, argued that the reason is the electoral flex and the serious chops that the farmers as a group don't just possess but have displayed in Uttar Pradesh and Punjab, the two big states headed for elections. A luscious win in UP is absolutely critical for the BJP's plan of a record third term in Delhi in 2024. This has been acknowledged publicly by Home Minister Amit Shah, stating "If you want Modi in 2024, bring Yogi back in 2022".

This reading seems to be correct to some extent because Modi as announced will spend many days in UP till the elections, now barely four months away. As stated by a BJP strategist, "We are hoping Modi and Yogi cement the voters to us. Modi in Western UP and Maharaj (Yogi) in eastern UP". Similar move was followed when Modi visited Rome and took photos hugging the Pope to use that for electoral gains in Goa and Manipur.

BJP MP Varun Gandhi reminded the government of four demands of farmers:  1) Over 700 farmers would have been alive had this decision been taken earlier, and hence Rs. 1 crore compensation should be given to those who died during the year-long protest. 2) All politically motivated false police cases filed against farmers must be dropped. 3) The demand for Minimum Support Price (MSP) be accepted. 4)  Take strict action against the Union Minister who is connected to the Lakhimpur Kheri incident so that there is a fair enquiry.

Former Finance Minister Yashwant Sinha, a former senior BJP leader, said: "While I congratulate the Kisans on their victory over the government for the repeal of the farm laws, I attach no noble sentiment to the government for this move. It is a calculated step for the Uttar Pradesh elections. For this government, democracy begins and ends with elections."

But as usual, some BJP leaders, moving away from the seemingly reconciliatory note of the Prime Minister, tried to find fault with the farmers. V.K. Singh MP stated, “There is a fight for supremacy among farmer organisations. For some reason they are not thinking about the benefit of the small farmer. That is why the PM has taken the laws back". This is not the first time the members of BJP-RSS affiliates have tried to label the kisans and their legitimate movement. They were called anti-nationals, Maoists, Khalistanis, foreign agents, terrorists, traitors, goondas, rich middlemen etc. Interestingly these false accusations failed to register beyond the blind supporters.

Brinda Karat writing in NDTV held the view that this announcement is a historic victory for the year-long, equally historic, united struggle of kisans under the leadership of the Samyukta Kisan Morcha. But she bemoaned the fact that there was not a word of regret for the 700 farmers martyred in the struggle. There was no assurance that all false cases against the farmers would be withdrawn. There was no apology for the harsh words used against farmers in the course of this one year. One of them, still a member of the Modi Ministry, was allegedly complicit in the horrific happenings in Lakhimpur Kheri. Modi maintained a deafening silence on the issue. She pointed out to the contradictions in the stand of the PM saying that he scored a self-goal when he defended the laws saying that he was sorry he had failed to convince "some" of the farmers. The question arises: If the laws are good, if only "some" of the farmers have opposed them, then why withdraw the laws?

The statement from the Samyukta Kisan Morcha stated that it was not withdrawing its struggle until the issue of legal guarantee for minimum support prices is addressed by the government. Other issues have also been flagged by the leaders of the kisans, many of whom have expressed scepticism about the announcement.

It is expedient to examine the demands of the kisans under this struggle. Repeal all the 3 new farm laws; Convene a special Parliament session to repeal the farm laws; Make Minimum Support Price (MSP) and state procurement of crops a legal right; Assure that conventional procurement system will remain; Cut diesel prices for agricultural use by 50%; Abolish the Electricity Ordinance 2020; Remove punishment and fine for stubble burning; Release farmers arrested for burning paddy stubble in Punjab; and Implement Swaminathan Commission Report of 2006.

A careful reader of Indian political sociology would realise that India's labouring classes, the kisans and farm workers, students and youth, social and human rights activists have shown by their courage that dictatorship does not work in India and it can be defeated by a united and prolonged struggle. Further, any attempt to bulldoze the Parliament and national institutions under the majority party and majoritarian politics and electoral politics, though may succeed sometimes, will dig its own grave sooner or later. Thus, the victory of the Kisan movement has wider ramifications to the political sociology and political economy of this country. Above all, it would pave fearless protests and resistance to any attempt to tamper with the Constitution.

It is important to point out the lessons from this democratic, socialist, secular and republic struggle to the political parties. Taking the citizens, especially the marginalised, for granted will not work anymore. Pushing legislations down the throat of the citizens without going through a thorough democratic process is defeatist in nature. Even the opposition parties trying to claim credit to the withdrawal of the farm laws would be digging their graves.

In conclusion, a quote from Bhagat Singh's Prison Diary (p. 124) sums up this view poignantly. “The aim of life is no more to control the mind, but to develop it harmoniously; not to achieve salvation here after, but to make the best use of it here below; and not to realise truth, beauty and good only in contemplation, but also in the actual experience of daily life; social progress depends not upon the ennoblement of the few but on the enrichment of democracy; universal brotherhood can be achieved only when there is an equality of opportunity -- of opportunity in the social, political and individual life”.

Motivated by the revolutionaries and martyrs of the past and the fighting farmers now, the common masses and conscious citizens are now emboldened to carry on the struggle to scrap new Labour Laws, CAA, NEP, FCRA, Sale of Public Sector, etc.