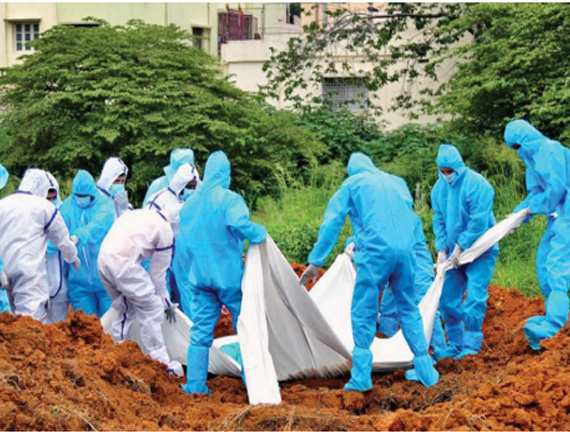 Death takes away everything from a person.

Yes, it is more tragic when losing a family member or a loved one and the only solace is proper performance of death rites that is considered sacrosanct for any religion.

But deaths caused by the global novel coronavirus pandemic seems to pose serious threats, most importantly, performing last rites of the deceased due to COVID-19. Although it has been debated and argued that there was no scientific reason for families to not perform the last rites, there have been cases of families not willing to accept bodies of coronavirus patients.

Human remains should always be treated with dignity and respect, but is it happening in actual practice in the case of deceased COVID-19 patients?

True, the chances of a fatal infection are high, if not handled with care. But the cause for concern is that religious rituals seem to have taken a backseat, even as the Union Ministry of Health‘s March 15 guidelines on burials clearly state that the family may view the face of their loved one before they are cremated or buried and all religious rituals that do not require contact are allowed.

Well, the manner in which deaths have been mounting due to COVID-19 poses a plethora of challenges to regulatory authorities. Accordingly, world over, policies and guidelines have been changing on handling the dead bodies of COVID-19 patients and India is no exception. While earlier hospitals were strictly forbidden from handing over the bodies of suspected COVID-19 cases to relatives for cremation, guidelines are undergoing changes.

When 55-year-old Dr Simon Hercules, a neurologist and founder of a speciality hospital in Chennai breathed his last a few months ago, suspecting that the cause of death was due COVID-19, his human remains were not allowed to be buried in the Cemetery due to law and order problem. At the Cemetery, nearly 40 local residents gathered and protested. Unable to convince them, his human remains was taken to another burial ground where over 70 people attacked the officials with sticks and stones. Finally, with police protection, Late Simon was buried in haste, manually.

Taking suo motu cognisance, a division bench of Madras High Court had observed that “Citizens are not expected to take law and order into their hands and if it is so, would definitely lead to anarchy. There is likelihood of similar kinds of incidents to occur in future also.” Maintaining that “the scope and ambit of Article 21 of the Constitution includes the right to have a decent burial”, the Court while invoking and highlighting the legal consequences of trespassing on burial places, also emphasized that the guidelines that have been issued by the Central government from time to time in relation to COVID-19 are expected to be known to the citizens and followed thoroughly.

Media reports of human remains of COVID-19 patients, either being dumped in garbage vans or even placed on a hospital bed next to a patient undergoing treatment, or driven away in an ambulance along with other casualties are rather disturbing. More recently, reportedly in a designated facility to treat Covid patients in Kolkata, it was alleged that the families were not informed about the end of their near and dear ones. In such a scenario, the father of a 13-year-old girl ran behind the ambulance once he came to know that his daughter was among the victims inside the vehicle.

But hopefully, the Calcutta High Court directive of this September 16 will pave way for the next kin of Covid victims to receive the human remains and perform the last rites

The Court decided a public interest litigation which among others had raised two important issues. i) The human remains/dead bodies of persons inflicted with COVID-19 were being disposed of by the administration unceremoniously and in an undignified manner without showing even a semblance of respect to the mortal remains and ii) Relatives and friends of persons admitted to hospitals with COVID-19 or persons who have contracted the disease whilst in hospitals having been admitted for some other malady, and who subsequently passed away, are not being permitted to have a last look at or to pay last respect to the mortal remains of the dead person and to perform the last rites.

In response the State Government had submitted that in the event of death of a patient, the hospital authorities shall inform the family members within one hour of death. A body cover with transparent face area shall be used. The body cover supplied earlier shall not be used. Mask and gloves will be provided to the family members by the concerned hospital after proper sanitisation. The dead body should be kept at a suitable place for 30 minutes during which the family members shall be allowed to pay their last respects.

The Court while maintaining that living with dignity includes not only the dignity of a person when he is alive but also the dignity following his death, it stated that disposal of a human body, whether or not the person dies of COVID-19, whether by cremation or burial, should be done with due respect and solemnness. The Bench also observed that the near and dear ones of a deceased person who had contracted COVID-19 should have an opportunity to have a final look at the human remains of the person and to pay their last respect and homage to the departed soul.

When the post mortem of the body is not required, it shall be handed over to the immediate next of kin of the deceased after completion of hospital formalities.

There is an imperative need to exercise due caution and undertake religious and cultural practices associated with death rites without crowding and physical contact.