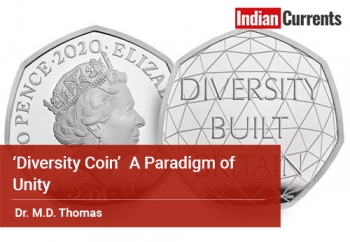 ‘Diversity Coin’ : A Paradigm of Unity

Rishi Sunak, Chancellor of Exchequer in United Kingdom, has unveiled a ‘Diversity Coin’ of 50 pence, on 17 October 2020, to celebrate the diverse history of Britain and to recognize the profound contribution minority communities have made to the shared history of the country. The coin carries a rare and brilliant message ‘Diversity Built Britain’. The coin echoes ‘commitment of the government to building a fairer society for all’ and a ‘fair representation of the contribution from all ethnic groups and walks of life’ to that effect.

The historic event was a wise and great gesture from the part of the government in recognizing and following up the campaign ‘We too built Britain’, which has been working for the fair representation of the contribution of minority communities across all walks of life. It may be noted that a major number of the minority groups are from South Asia, including India, who made Britain their home. It is also planned that the above coin to be the beginning of the series, in which Mahatma Gandhi, the father of India, will be the first non-white to feature on the British currency coin. The coin features a geodome that represents a ‘community of connection and strength’, with ‘each section working together to build something greater’.

The scheme of the British government is a gleaming paradigm in itself, a paradigm of unity, perhaps in the entire history of the world, illustrating a ‘leadership with a difference’, edifyingly so. It is a proof positive for the refined sense of ethics in the elected government of Britain to have contained all ethnic groups and to have recognized duly their share of making the country what it is, without even the least degree of bias or considerations of superior and inferior, great and small or major and minor. It is also a crystal clear proof that politicians have the capacity for rising beyond the street levels and lead the country to towering, global and reputable ideals. Without a shred of doubt, only such noble deeds can make humanity great, with the dignity the Creator has endowed it with.

It is also noteworthy that the very Chancellor who launched the coin is of Indian origin. Sunil Chopra was the mayor of the London Borough of Southwark, in 2014-2015, and deputy mayor, in 2013-2014, the first Indian-origin person to hold the prestigious office. There are hundreds of persons in various countries in the west, like USA, Canada and Australia, who profusely enjoy the good will, esteem and support of the respective countries and their people. Kamala Harris is the vice-presidential candidate in the USA, too. Besides, hundreds and thousands of Indians are well-appreciated and accepted as scholars, industrialists, executives and good citizens, even prime minister or president, across the nationalities of their origin. These instances underscore the ethical standard the government of United Kingdom has displayed, meritoriously so.

Diversity has been the hall mark of the Indian society from time immemorial. India never tires loud-speaking at the top of its voice that ‘unity in diversity’ is another word for India. It could certainly be observed that there have been several instances of unbiased good sense in India from the political, governmental and administrative quarters in the interests of the country. All the same, to be honest, selfishness, discrimination, division, highhandedness and utilitarian ways have been having its sway in our country, even to proportions much beyond imagination, from times much earlier than what can be remembered or is recorded. In this respect, the recent times seem to have dwindled to miserable and irredeemable proportions, to the utter dismay of all claims of the dignity and development of the country.

India is truly diverse, no doubt, by way of ethnic traits, dialects, languages, dress habits, food tastes, ideologies, religions, cultures, social customs, and the like. There is no denying the fact that diversity is the characteristic of the entire world. But, Asia and India are more so in great and greater degrees. All the same, the irony of the situation is that while India is highly aspiring to be a more developed and important country in the globalized world, like many other countries, it seems to get bankrupt of its morale of living with all communities harmoniously and with respect and care for one and all, the smaller ones in special. In point of fact, difference is the inner character of diversity, which, in essence, is positive and enriching. But, the very same difference, along with dissent, is being considered a negative factor and is considered intolerable. The idea of uniformity, along with the arrogance of the number, seems to kill the spirit of unity among the diverse communities, which requires being diagnosed and treated, lest the country eventually get split into pieces.

India is the largest democracy in the world, by way of the population of the country. The citizens have the opportunity to vote for a certain party they consider capable of running the country or the state, in view of the common welfare. But, our times are known for even electronic machines that cannot be relied upon. Persons of the criminal background, persons who can tell lies successfully, even to the utter collapse of one’s conscience, and manipulate all prospects in their favour seem to have their brutal grip on the state of affairs. The autonomous institutions of the country that are authorized by the Constitution of India to strike a balance in the situation of the county in the interest of the citizens appear to have lost their moral fibre. Where do the citizens look for a democratic sense that will argue for the due share of individuals and groups in the country, in view of finding ‘we the people’ strong on their feet? This is an unsolved question, yet to be answered.

The India of the modern times has been constructed by the whole-hearted collaboration of all communities and groups, major or minor. The independent India is the outcome of the freedom struggle fought by tens and thousands of persons from all communities. Jews, Christians, Muslims, Parsis, and Bahais have contributed immensely to the making of what India today is, along with Buddhists, Jains, Sikhs and the community that is called Hindus. If truth be told, smaller communities have contributed to the quality and integrity of the country, in diverse ways, much beyond their number. Therefore, it is absurd to divide the country into people of Indian and non-Indian origin and discriminate them, also because the entire population of the country seems to have immigrated to the current land, called India, at different times, as per the latest research. The plight of the minority communities in India today seems to move towards a deplorable predicament, leave aside recognizing their contribution. Their peaceful co-existence and communal harmony seem to be at stake.

‘Unity in diversity’ is not a slogan that is meant for goody-goody platforms and books. It is a reality to be lived, in the everyday contexts of life. The great insight ‘good thoughts are welcome from all directions’ is not meant for merely an after-meal conversation. ‘Vasudhaiv kutumbakam’ is not for patting oneself and for taking the credit of all that is good in the country. The slogans ‘saare jahaan se achha’ and ‘vishwaguru’ seem to be shields to cover up all that the country is lagging behind in. But, such gimmicks are not going to take the great nation anywhere. Only when diversity is honoured, unity could be thought of being explored and achieved. Unity does not come by itself. It has to be toiled for. Only when the stakeholders of the country learn to have the maturity to recognize and to take care of communities of all ethnic origin, language, caste, creed, class and culture, our India can think of developing, progressing and prospering, in the real sense.

At the end of the day, greatness and nobility demand that the so called greater one takes care of the so called smaller. The distinctive contribution the minority communities have made to making India what it is today is highly qualitative and immense and is beyond comparison. Justice and ethics demand that it should be recognized. Only then India can become strong, integrated, dignified and spiritual. In fact, ‘diversity built India’, too. A ‘greater India’ is in the waiting list, as a ‘community of connection and strength’, with ‘each section working together to build something greater’. A ‘fair recognition of the contribution from all ethnic groups and walks of life’ calls for the ‘commitment of the government to building a fairer society for all’. I honestly suppose, translating such a vision into a mission is the collaborative pursuit of all citizens, the ruling and the ruled, towards realizing a ‘greater India’, with greater prospects.