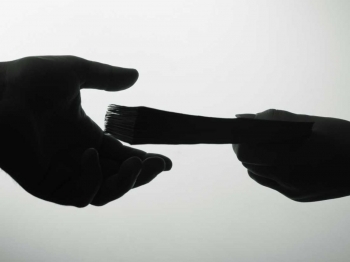 Corruption undermines the values of democratic institutions and slows down economic growth. But the stressful experience of getting a job done in a government office paves the way for the bribe to creep in although bribery is a penal offence in India. According to a report published by Transparency International in 2020, India has the highest rate of bribery (39%) in Asia.  It says, 50% of those involved in bribery are asked to bribe. Of the people surveyed 42% had paid bribes.

Every individual has a story of bribe to share and largely we are forced to pay bribe for a job which is legal but is not happening. My first experience of paying bribe was in my 12th grade when my National Merit scholarship money was not coming. I went to our college clerk who forced me to pay Rs. 50 to do the paper work. With the ‘bill’ in hand I made my first trip to the Capital city. At the Education Board office, the tobacco-chewing thin-looking clerk with unshaven face was not ready to unzip his conjoined lips. After a long wait in front of his desk, he looked up at me and rubbed his thumb and index finger. I nodded my head in affirmative. He stood up and led me to the smelly stinky toilet of the office complex. As asked, I pushed into his fist one hundred Fifty rupees notes. In no time the scholarship cheque was ready. I rushed to my home town to open my first ever bank account. This formula worked for the next five years. Receiving scholarship during student life is an indomitable joy.

But the ceremonious bribe-giving I had witnessed was during my school days when I accompanied one local ‘uncle’ to meet a government employee. The dhoti- wearing middle-aged clerk greeted us at the gate of his house. We squatted on the mosaic floor. In a brief discussion the deal was done for few hundred bucks; a quite tempting amount in the 80’s. The money was paid and before parting we were served with a vegetarian meal which we enjoyed together.

Long years later I had to upgrade my passport to my new address. Despite successful verification when my passport was not arriving, I got worried. Colleagues told me the amount that I had paid to the verification officer was actually half the amount which they demand. Now I could decode why had the officer left my home unhappy. But now I have the key to make him happy. Three days later the postman knocked my door with the “Blue Book” in his hand.

One of my foreign trips required a Govt. document. The approval was accorded but the shark at the window was adamant. Looking at my anxiety the clerk suggested that ‘money’ can quick fix. Sooner I agreed, she taught me how to push the cash money inside the file. I followed her instruction. A fortnight later I was on board.

The ancient legal document from Babylonian era “Code of Hammurabi” and the “Arthashastra” in India testify the fact that bribery existed since time immemorial particularly among officers of the state. Bribery is still alive; it executes a job, sure and faster. Society at large doesn’t object to it because it doesn’t discriminate anyone. It has no colour. It treats everyone at-par.

(The writer is an Advocate-on-Record, Supreme Court of India; Email: fichoudhury@gmail.com)