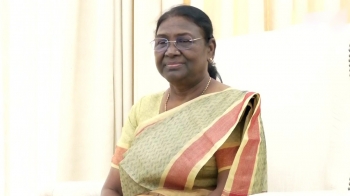 On 15th August 2022 when India celebrates its 75th Independence Day we can be proud that the country got its second woman President for the largest democracy in the world. 64-year-old Droupadi Murmu, born on 20th June 1958 as a Tribal child, in a remote village in Mayurbhanji district of Odisha where electricity and internet are unknown to many even today, suddenly marched to Raisina Hills making history.

It is reported that people from her ancestral village have to go to other villages to charge their mobile phones. However, when her Presidential candidature was announced and after media reports surfaced that people in the village are living without electricity, the Odisha government started the electrification work in a portion of Uparbeda, the ancestral village of Murmu. Her victory procession was marked with tribal dance.

When India celebrates its 75th Independence Day, it is pertinent to note the words of Gandhiji, “The role women played in the freedom struggle and making of India should be written in letters of gold”. Women made India proud in almost all fields. Even in the writing of the Constitution there were 15 outstanding women in the Constituent Assembly. There were three women from Kerala, Ammu Swaminathan from Palghat district, Dakshayani Velayudhan from Cochin, the first and only Dalit Woman in the Constituent Assembly and Annie Mascarene from a Latin Catholic family from Trivandrum. Two women from Andhra Pradesh were Durgabai Deshmukh and Sarojini Naidu whose fight led to women’s right to vote.

Hansa Jivraj Mehta from Gujarat played a vital role that her influence changed the wordings in the Universal Declaration of Human Rights from “All men are born free and equal” to “All human beings are born free and equal”. Leela Roy, Malati Choudhary and Ranuka Ray were from Bengal; U.P was represented by Purnima Banerjee, Vijaya Lakshmi Pandit, Kamla Chaudhary and Begaum Aizaz Rasul, who was the only Muslim woman in the Constituent Assembly; Sucheta Kriplani from Haryana played an important role in Quit India movement. Another eminent woman was Rajkumari Amrit Kaur from Delhi who became the first Health Minister of India and founder of the All India Institute of Medical Sciences.

In sports field, there are several leading women who made our nation proud. The Phogat sisters and family are India’s most famous sports women.  The six sisters from Balali, Haryana, are known wrestlers on an international level. Deepika Kumari, the daughter of a rickshaw driver/puller, is the first Indian archer (male and female) ever to be named number one in the world; Sania Mirza, India’s finest  tennis player; Saina Nehwal and P. V. Sindhu, world badminton champions; Mary Kom, a world boxing champion; Dipa Karmakar, world Gymnastic Champion; Anju Bobby George, a Commonwealth Games winner in long jump and high jump; Sakshi Malik, a world wrestler; Karnam Malleswari, a world champion in Weightlifting etc.
Beyond rocket boys, there are unsung rocket women in India’s space history.

Tessy Thomas, a scientist and first woman Director General of Aeronautical  systems; Anuradha T.K. who worked as a Project Director of ISRO; Ritu Karidhal, who was a Deputy Operations Director to India’s Mars Orbital Mission, known as “Rocket Woman”; Muthayya Vanitha, electronics system engineer with ISRO; Moumita Dutta, Physicist involved in the development of Mars Orbiter Mission; Nandini Harinath, a Rocket scientist at ISRO; V.R. Lalithambika, the senior most scientists at Indian Space Agency, and so on should be remembered with folded hands.

Landmark judgements of the Supreme Court upholding equality and women’s dignity are great contribution to the nation. Some of those judgements are: (1) Vishaka vs State of Rajasthan (1997) – women have equal right to work with human dignity/against sexual harassment at workplace; (2) Mary Roy vs State of Kerala(1986) -- Christian daughters have equal right to property as sons; (3) Lata Singh vs State of Uttar Pradesh (2006) -- Adult woman has the right to choose her partner; (4) Roxann Sharma vs Arun Sharma (2015) -- Under the age of 5 the mother has the right to custody of the child; (5) Laxmi vs Union of India (2006) – Granting adequate compensation for the acid victim; and (6) The  Secretary, Ministry of Defence vs Babita Punya and Ors (2020), where Supreme Court ordered for the Permanent Commission for women in Army.

However, the rise of a woman from the forest to the Raisina Hills inspires millions that efforts coupled with opportunity can raise any one to the highest position. As madam Murmu rightly said, “My election is a proof of the fact that in India, the poor can dream”.

Truly, a Tribal who served as a ward Councillor becoming the President of India instills hope and raises the aspirations of Indians. President Murmu urges the youth to contribute to nation-building. Murmu’s concern is highlighted when she said, “I want all our sisters and daughters to be empowered more and more so that they continue to increase their contribution in every field of nation building.”

Women’s rise in any field through tremendous struggle, and waging war against patriarchy is highly appreciable. Murmu’s rise to Raisina Hills also upholds Article 15 of the Constitution that “There shall be no discrimination based on race, religion, caste, sex and place of birth.”

In the reign of President Murmu, we look forward to strict implementation of Justice, Liberty, Equality and Fraternity ensured by the Constitution of India.