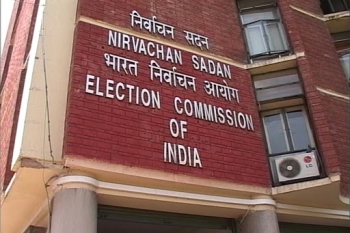 It drafts and implements the Code of Conduct for elections and takes disciplinary action against parties violating it. It is authorized to advise the government on decisions affecting the election and control the transfer of government officials across departments. The Election Commission also controls the work of government officials on election duty. It has the power to order a re-poll in case it finds evidence of unfair practices during polling. The people’s participation can be measured through the voter turnout on polling day.

Elections are often termed as a ‘festival of democracy’ and the casting of the vote is termed as an important duty for the citizens. The election day is flooded with images of people queuing up at polling booths and showcasing their inked fingers; one comes across many colourful and interesting visuals in the ongoing Assembly elections. Right from visuals of the Electronic Voting Machines being transported on donkeys, to a hairstyle showcasing support for a party and women empowerment, India's love for democracy and inclusivity could be seen.

The Indian Constitution has granted the right to vote to all citizens of sound mind above the age of 18, irrespective of an individual’s caste, religion, social or economic status. This right is universally granted to all Indians, with a few exceptions. As a voter, a person is entitled to certain rights and privileges as laid down by the Constitution, which safeguards the rights of the voter. It also lays down the conditions under which this privilege is granted to citizens. Voting is not a fundamental right, but is a legal right granted to citizens. No individual can be detained or prevented from voting, unless they fulfil the criteria for disqualification.

Every voter is allowed one vote only. A voter can vote only at the constituency where he/she has registered himself/herself. In special cases, voting can be done by post, which is known as postal ballot. Postal ballots are conducted for those individuals who are unable to visit a polling booth in person due to certain reasons. Generally, postal ballot privileges are given to members of the armed forces posted across the country and overseas, to individuals who are on election duty (such as electoral officers, policemen on duty etc). Postal ballot can also be granted to those individuals who are under preventive detention, resulting in their inability to visit a polling booth and cast their vote in person.

•    Today the Election Commission, an autonomous body, has seemingly become a ‘puppet’ in the hands of the government. Be it state-level or national-level election, the EC is seen favouring the ruling party and its alliance.

•    The EC has failed to control the ‘distribution of cash and gift items’ to electorates. In Tamil Nadu, the EC claimed to have seized 428 crores of rupees. What about the unseized money/gift materials?

•    The EC has failed to stop fake voters. In Kerala, it was found that 4.5 lakhs voters had fake voter IDs. Each one had 3 to 4 voter IDs making them eligible to vote in multiple constituencies.

•    Here is a WhatsApp story: An old man came to a polling booth, showed his wife’s ID card to the official and asked whether she had voted. The official checked his list and said that she came 30 minutes back and voted. The old man said sadly, “My wife died 15 years ago. But on every voting day she comes and votes very faithfully. Today I wanted to meet her. It is my bad luck that I just missed her.”

•    In many constituencies in and around Chennai, fake voters succeeded to vote. Many north Indian migrant workers were reportedly hired for this purpose. When the actual voters came to vote, they got a shock to know that their votes have already been cast. When they complained, the officials had no solution.

•    Another shocking and interesting news was that the EVMs were carried on the two-wheelers by unauthorised persons at Velachery in Chennai. They were caught by the opposition party workers. Interestingly, the EC duty officer pretended to be ignorant about this event. It has been reported from Assam that a few BJP candidates carried the EVMs in their own vehicles. There are also reports from Tamil Nadu, Assam and West Bengal that some unidentified persons entered the “strong rooms” to tamper the EVMs or take them away to other locations.

•    During the Bihar Assembly election, the EC published in its website the names of some candidates as winners. Within an hour, the same EC announced that those candidates had lost. The reliability of the EC website and its reports is at stake.

•    Today the EVM has become the talk in every nook and corner of the country. Reports about their tampering are galore and doubts have been expressed about their reliability.

In 2019, 17 Congress MLAs were allegedly purchased by the BJP in Karnataka. As a result, the ruling government was overturned and the minority BJP became the ruling party. It was indeed a sheer betrayal on the part of those MLAs. The trust that people had on them went to the drain. Such incidences have occurred and continue to occur in many other states too. Sadly, there is no law, with teeth, to prevent an elected candidate to shift his/her party. If horse-trading is permitted, then, why should there be an election?

People are not sure whether the elected candidate would remain in the same party till the end of the 5-year tenure. Has election not become a meaningless ritual? Why should people vote at all and for what?