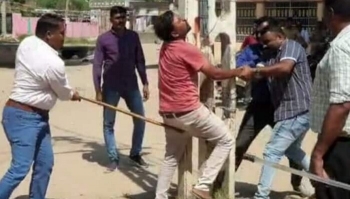 The news of five Muslim intellectuals meeting Mohan Bhagwat, the RSS Sarsanghchalak, in August appeared in the media in the last week of September. Since then, there have been several attempts on the part of the Sangh Parivar public relations managers to create a perception that the Muslims are safe in a Hindu Rashtra and the insecurity, threat, discrimination and demonization experienced by the members of the Muslim community are only the creations of certain vested interests who are bent upon discrediting India.

The RSS chief during his Dussehra speech mentioned the need for reaching out to the minority communities. But no concrete proposal has come from the RSS, the ideological fountainhead of the BJP, to remove or substantially reduce the threat and insecurity feeling of the minorities under the present regime.

An attempt to paint a rosy picture of the status of minorities, especially of the Muslim community, was made by Mr. Ram Madhav in his write up in The Indian Express on October 8 under the title, “The Spector Peddlers”. He wrote that India has an Adivasi woman as its President and Muslims, Christians and other minorities hold high positions in government, judiciary and bureaucracy and are Members of Parliament and state Legislative Assemblies. Christian majority states like Nagaland, Mizoram and Meghalaya have Christian chief ministers, some in alliance with the BJP. He also mentioned the steps taken by the BJP government to improve the life situation of the poor and more discriminated sections within the Muslim community -- the Pasmanda or Arzal -- and making “triple talk” illegal.

His main contention is that there is a vested interest in creating the narrative of 'minorities in danger' and besmirching the image of BJP and RSS. He appealed to the newly emerging Muslim leadership to reject “this cacophony” and seize an opportunity that is being offered. According to him, “even the reprehensible incidents of mob lynching were few and not limited to any one community. If there were Muslim victims, there were Hindu victims too. India’s law and order establishment takes swift action against all culprits.”

Another argument devised by Ram Madhav is that the global audience is constantly fed such misinformation largely by groups inimical to India’s democracy and interests. “What lends credibility to such lies is the insidious lending of support by the left-liberal cable in the west”, he wrote. He concluded his write up with a positive note that “Indian society has always firmly kept the ethos of “unity in diversity”. It didn’t allow India to be converted into another version of Pakistan”.

One who reads this article can easily understand that it is written for the consumption of those who are not aware of the tectonic socio-political changes that have taken place in India since the BJP came to power at the centre in 2014. The purpose of Ram Madhav’s article appears to create a perception to cover up the reality being brought to light by some independent agencies that study objectively the socio-political developments taking place in India.

There are enough studies to prove that the atrocities and violence on the minorities, especially on Muslims, increased enormously since 2014. Planned and concerted attempts have been made by some groups with the overt and covert support of the BJP governments to discriminate, discredit and demonize Muslims. They include cow-related mob lynching, love jihad, branding the members of Tablighi Jamaat as super spreaders of Covid and filing false cases against them, confiscation of the property of the Muslims who take part in any protest and the latest addition of bulldozing the houses and establishments of Muslims, based on mere accusation without any enquiry or fact-finding. This is euphemistically known as ‘bulldozer justice’.

One of the contentions of Ram Madhav is that the incidents of mob lynching were few and not limited to one community alone. This statement is far from the truth. According to a research study published by IndiaSpend.com on 28th June 2017, 84% of deaths in cow-related violence since 2010 are Muslims. In 30% of the attacks, the police registered cases against the victims. The data also showed that half of the attacks were based on rumours.

The data compiled by Article-14.com show that there were 85 instances of cow-related violence against Muslims from 2015 to 2019 and most of the victims of these incidents died. Aakar Patel in his book, ‘Price of the Modi Years’ has given a short narration of these 85 violent incidents.  The reality is that after 2014, the anti-cow slaughter laws were made stringent by the BJP-ruled states, and the laws have been weaponized by certain interest groups to brutalize Muslims. It is shocking to know that then Union Minister Jayant Sinha garlanded 8 people convicted in the Ramgarh lynching case in Jharkhand at a meeting organized to felicitate the convicts.

“Love jihad” is another strategy devised by the Sangh Parivar groups to attack Muslims and demonize them. Use of draconian laws like National Security Act (NSA) against the Muslims by the BJP governments was documented by some studies. As per a report published in The Indian Express on 11 September 2020, in Uttar Pradesh, more than half of NSA arrests in 2020 were for cow slaughter cases.

Aakar Patel has pointed out  that 11 states had filed 20 FIRS against more than 2500 Tablighi Jamaat members, but no one was convicted. “The courts fiercely criticized the actions of the government. Judges called the cases ‘malicious’, ‘a virtual persecution’, ‘abuse of process’ and ‘abuse of power”. It seems that Ram Madhav has conveniently forgotten these facts corroborated by Indian courts.

Against the backdrop of the anti-CAA protests, the role played by the BJP leaders and the union government in Northeast Delhi communal riots was under suspicion. Many had suspected whether it was spontaneous or planned. The recently released report on 2020 Northeast Delhi violence by a ‘citizens committee’, chaired by former judge of the Supreme Court Madan B Lokur, has flagged “State failures”, including those of the Delhi Police, the Ministry of Home Affairs and the Delhi government. According to the report, the Delhi Police failed to take punitive measures against hate speeches made by political leaders and others in the run-up to February 23 or on the day itself. Ram Madhav may go through the report to find out how impartial the police and the union government were.

It is difficult to find a day on which the media doesn’t report news on hate speech or atrocities on the Muslims by the state and the non-state actors. At a Virat Hindu Sabha organized by a unit of Vishwa Hindu Parishad in Delhi, BJP MP Parvesh Verma called for ‘smpoorna bahishkar’ or total boycott of “these people ''. He did not mention the name of the community to be boycotted. But it was loud and clear to the crowd that cheered him. "Wherever you see them, if you want to fix their head, if you want to set them straight, then the only cure is total boycott. Raise your hand if you agree," the BJP MP said, and gestured towards the crowd. All of them raised their hands. The silence of the top leaders of the BJP and the RSS enables the next public outburst of hate.

The media reported that during the Navratri celebrations by the plain-clothes policemen in Kheda district of Gujarat, there was public flogging of Muslims accused of alleged stone-pelting. It is a blatant violation of the rule of law. As per a report published in Wire on 10th October, Gujarat’s Minister of State for Home, Harsh Sanghvi, praised the cops in question.  Since a video showing at least four men being held against an electricity pole and flogged amidst cheers by the village locals went viral, multiple reports have identified that police officials involved in the incident as being from the Local Crime Branch (LCB). Retired Delhi High Court judge, Justice Jaspal Singh, expressed “shock” at how “citizens being attacked and flogged brutally by not only fellow citizens, but also by men in uniform whose duty is to maintain law and order.”

It was reported in the media that during the meeting with the RSS chief the Muslim intellectuals had told Mohan Bhagwat about the false propaganda being carried out by some organizations regarding population growth among the Muslims in India. As per the Family Health Survey 5 released by the Union Health Ministry, the fertility rate among Muslims has dropped to 2.3 in 2019-20 from a high of 4.4 in 1992-93. Fertility rate is the average number of children born to a woman in her lifetime.  In fact, NFHS data have shown that there is a 0.3-point gap between the fertility rate of Hindus and Muslims i.e., a difference of less than one child. In other words, the decline in fertility rates over the last 20 years has been sharper in the case of Muslims than of the Hindus.

Despite explaining this reality to Mohan Bhagwat by the Muslim intellectuals, the latter raised the issue of population growth during his Vijayadashami speech. Religion-based population balance is an important subject that can no longer be ignored, so that a holistic population policy should be brought and should be equally applicable to all, he said.

The fear and insecurity experienced by the Muslim community in India is not the result of false propaganda by vested interests as claimed by the supporters and public relations managers of the Sangh Parivar. There is more than enough data to prove the atrocities committed on the minorities, especially on Muslims, by the state and non-state actors. If the dialogue between the two communities is to be genuine and effective, the Sangh Parivar organizations and the BJP governments have to change their attitude towards the minorities and stop spreading prejudices and hate messages. “But given the harvest of hate and the dividends of silence, that won’t happen in a hurry”, as The Indian Express wrote in its editorial on October 11, 2022.