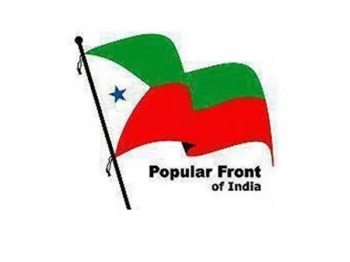 Fanatics are Enemies of Religion

Fanatics and fundamentalists are the greatest enemies of any religion and they are found in all religions. When they take over the leadership of a religion in a particular country or region, they also can easily capture political power. That is what happened in Afghanistan.

The people are paying a heavy price for the initial support they extended to the Taliban. The cruelties inflicted by the Taliban on their own people are known to the whole world. The anti-hijab protests by Muslim women are ruthlessly suppressed by the ‘morality police’ of Iran. Fanatics, irrespective of the religion to which they belong, indulge in blatant violation of human rights and cruelties. Every religious fanatic or fundamentalist is a potential threat to peace and harmony in society.

The ban of Popular Front of India (PFI) by the Ministry of Home Affairs of India is to be viewed against the backdrop of the rise of religious fanatics and their involvement in terrorist activities and other forms of violence.

A classic example for the arrogance and cruelty of PFI is chopping off the hand of professor T.J. Joseph for alleged blasphemy 12 years ago. A former lecturer of Malayalam literature at Newman College in Thodupuzha, Kerala, Joseph was attacked and his right hand was chopped off allegedly by PFI activists in July 2010 while he, along with his mother and sister, was returning from church. The attackers told him that he was being punished for the alleged sacrilegious undertones of one of the questions he had framed in an examination. The “Taliban-model” attack was one of the initial crimes by PFI cadres that shook the southern state. A case was investigated by the National Investigation Agency (NIA) and a special court of NIA in 2015 convicted 13 people, owing allegiance to the PFI.

On 27th September the Union government banned PFI and its eight affiliates for five years over terrorist activities. The government notification gave a number of reasons, including that “the PFI and its associates or affiliates for fronts operate openly as socio-economic, educational organization, but they have been pursuing a secret agenda to radicalize a particular section of Indian society working towards undermining the concept of democracy and show sheer disrespect towards constitutional authority and constitutional setup of the country”.

The government has a great responsibility to protect the rights of all citizens and therefore it has to use its strong arm against any group or organization that violates the provisions of Indian Constitution and indulges in violence. Against this backdrop, some political parties and civil society organizations have welcomed the ban of PFI. At the same time, some of them have pointed out that the government has to be even-handed in its approach towards all organizations that violate the constitutional norms. They have questioned the inaction of the BJP governments at the centre and in the states towards some of the RSS-affiliated organizations, which often indulge in violence in utter disregard for the constitutional norms. The response of the Prime Minister and the Union Home Minister to the call for genocide of Muslim by the members of Dharam Sansad was a long silence. The Dharam Sansad has already prepared a draft of the Constitution of Hindu Rashtra that is in tune with Manusmriti.

Some political parties and writers have questioned the government for not banning the Social Democratic Party of India (SDPI), the political wing of PFI. The relationship between PFI and SDPI is like the relationship between the RSS and the BJP. Many have expressed the view that most of the banned PFI members will migrate to SDPI. Some opposition parties see politics in not banning SDPI. In Karnataka, where Assembly elections will be held within a few months, Muslims constitute about 13% of the population. If SDPI is banned, the Muslim votes will be consolidated behind the Congress. With SDPI in the fray, the Muslim votes will be divided and the BJP will be the main beneficiary.

Some are of the view that a ban of an organization is not a solution. The PFI can be resurrected in different forms. RSS was banned three times; but it has become the biggest NGO in the world. It has become an umbrella body that oversees more than 100 affiliates with millions of members, dealing with diverse issues such as economy, ex-service men, education, culture, charity, law, environment, social welfare, etc. There is no field untouched by the RSS and there is no segment in the society that is not influenced by the RSS.

As most of the BJP members, MPs, MLAs and ministers are trained in RSS ideology, its influence and control over the government is evident from the policies and actions of the BJP governments both at the centre and in the states. The fact that Mahatma Gandhi was assassinated by a person who shared the ideology of the Sangh Parivar shows that it is not averse to violence. The role of the Sangh Parivar organizations in fomenting communal riots have been brought to light by many enquiry commissions.

Very often the governments fail in implementing strictly the ban on any violent organization. Sometimes the ruling parties provide overt or covert support to organizations that resort to violence. The LDF government in Kerala is accused of tacitly supporting PFI and taking the support of PFI in view of weaking the Muslim League. That could be the reason for the Muslim League promptly supporting the ban of PFI.

Along with the governments taking stringent actions against the organizations that endorse ideologies based on violence, people in general have to be alert to prevent the growth of such organizations and movements.

First of all, people of all religions have to develop critical thinking and scientific temper as enjoined by the Indian Constitution as one among the fundamental duties of the citizens. In the absence of critical thinking, people can be easily brainwashed by the elements that promote violence. People also can become victims of superstitions and blind faith.

Secondly, people have to realize that religion is not an end in itself, but it is only a means for people to find meaning in life. The role of religion is to make the followers better human beings. The very purpose of incarnation by God is to teach people how to live as authentic human beings.  If people realize that humanity is the greatest religion, religious and political leaders will not be able to hoodwink them.

Thirdly, people, especially the young people, are to be made to understand through value education the difference between spirituality and religiosity. The essence of all religions is spirituality i.e.  practice of the values enjoined upon by religions like honesty, adherence to truth and justice, sensitivity and compassion, and non-discrimination and respecting the dignity of all human beings.  Rituals, symbols, prayers, penance, pilgrimages, dogmas etc., are to be accepted and promoted as much as they help the faithful to grow in spirituality. Sometimes they can become obstacles to growth in spirituality.

Fourthly, the faithful of all religions have to resist commercialization and politicization of religion. Religious leaders often have the temptation to make money by exploiting the religious sentiments of the people. Politicians find religion as an emotive issue for political mobilization and polarization of people to create vote banks. Often, political and religious leaders enter into collusion to serve their vested interests. People must be shrewd enough to identify their nefarious policies and reject them outrightly.

Fifthly, accept ‘unity in diversity’ as the basic principle of peaceful co-existence. While adhering to the basic principles of one's religion, one has to respect other religions, as all religions have ultimately the same aim of leading people to God or helping them to find meaning in life. Acceptance, appreciation and celebration of diversity, especially in terms of religion and culture can contribute to creating a peaceful and harmonious situation.

Finally, in the context of India, promote the Gandhian values, the apostle of peace and harmony. Last week India celebrated the birthday of Mahatma Gandhi. It was reported that in some places, the police did not allow people to organize even a peace-march. The right-wing groups are not satisfied with killing Gandhi, they want to erase from the memory of people the image of Gandhi. Only Gandhi can save Indian democracy and secularism. Gandhi was deeply religious, but he was highly respectful to all religions.

According to Gandhi, religion is personal and a path to connect oneself with God, and it should lead to truth, spirituality, self-realization, sarvadharma samabhav and service to humanity. “Let me explain what I mean by religion. It is not the Hindu religion which I certainly prize above all other religions, but the religion which transcends Hinduism, which changes one's very nature, which binds one indissolubly to the truth within and which purifies ever,” says Gandhi. That is why Gandhi rejected any religious doctrine that does not appeal to reason and is in conflict with morality. He also says, “Religion which takes no account of practical affairs and does not help to solve them, is no religion”. According to him, the aim of a Fellowship of Faiths “should be to help a Hindu to become a better Hindu, a Mussalman to become a better Mussalman, and a Christian a better Christian”.