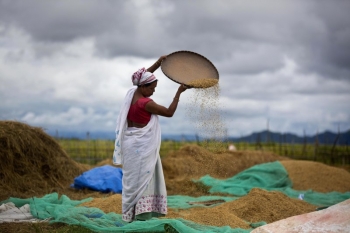 Farm Bills: Attack on Federalism and Livelihood of Farmers

The government’s three Farm Bills are not only a blatant attack on the federal structure of the Constitution but also adversely affect the livelihoods of millions of small and marginal farmers across the length and breadth of the country. It will also have far-reaching consequences, obviously very negative, on the country’s food security.

The first question that arises when one analyses the Farm Bills is that, if it is going to greatly benefit the farmers, why did the central government not take into confidence the states or the farmers before the ordinances were promulgated in June and subsequently the Bills were presented and passed without debate in the monsoon session of the Parliament in September. Even a suggestion by the Opposition to refer the Bills to a select committee was not considered by the government.

As per the 7th Schedule of the Indian Constitution, agriculture, agricultural markets, education, research and land are the primary legislative domains of the states. One is at a total loss to understand why the Modi government chose to encroach upon the states’ domain and enter into bitter confrontation with the states, especially the ones ruled by non-BJP governments.

In a vast and diverse country like India, no central law, especially dealing with agriculture, can be implemented without the cooperation of state governments. There are many ways through which the states can circumvent the central laws without coming into conflict. The Rajasthan, Punjab and Kerala governments have already adopted several measures, some through executive orders and others through legislation which in effect nullifies the central legislation. Punjab has passed a bill to restore the agricultural safeguards for farmers through the regulatory framework of Punjab Agricultural Produce Markets Act, 1961, to secure and protect the interests and livelihoods of farmers and farm labourers as also all others engaged in agriculture and related activities. Kerala has declared Minimum Support Price (MSP) for 16 items of agricultural produce to circumvent the central Farm Bills. The constitutionality of the laws are also being challenged in the Supreme Court.

The Farm Bills basically promise removal of restrictions on marketing farm products, allow cultivators to engage with private companies to sell their crops – in other words, undertake contract farming, and grant farmers the freedom to sell their produce at any place and to any person of their choice in a private market.

Farmers believe that this is the first step towards removing MSP for different farm products, especially paddy and wheat. Though the Modi government has been asserting that MSP will continue, nowhere in the Bills is MSP even mentioned.

As for the farmers’ capacity to operate in a private market, even in Punjab, agriculturally the most advanced state in the country, 86.2 percent are small and marginal farmers holding less than two acres of land per household and cannot be expected to operate profitably in a private market. If this is the case with Punjab, one can imagine the plight of farmers in other states when they will be compelled to operate in a purely private market without any regulations whatsoever. Even though agriculture is exclusively in the states’ domain, the central act prohibits the state governments from levying any market fee, cess or levy outside the Agricultural Produce Market Committee (APMC) areas.

Ironically, the Farmers (Empowerment and Protection) Agreement on Price Assurance and Farm Services Act, 2020, prohibits farmers from approaching the civil courts against violations of contracts or cheating by private players. All powers for dispute resolution is vested in the Sub-Divisional Magistrate and the District Magistrate. Our administrators, the majority of whom still working with the mindset of the colonial administrators, can hardly be expected to deliver justice to the poor farmers.

And under Clause 18 of the Act, no legal action can be taken against any government official if the actions are in ‘good faith’. It is virtually impossible to prove that any action by a corrupt government official is taken in bad faith. In short, while the farm acts have been made law with laudable intentions, they are likely to, at least in the immediate future, adversely affect the lives of farmers.