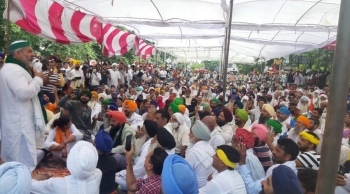 Farmers to Oppose BJP : Media Turns its Back on Mahapanchayat 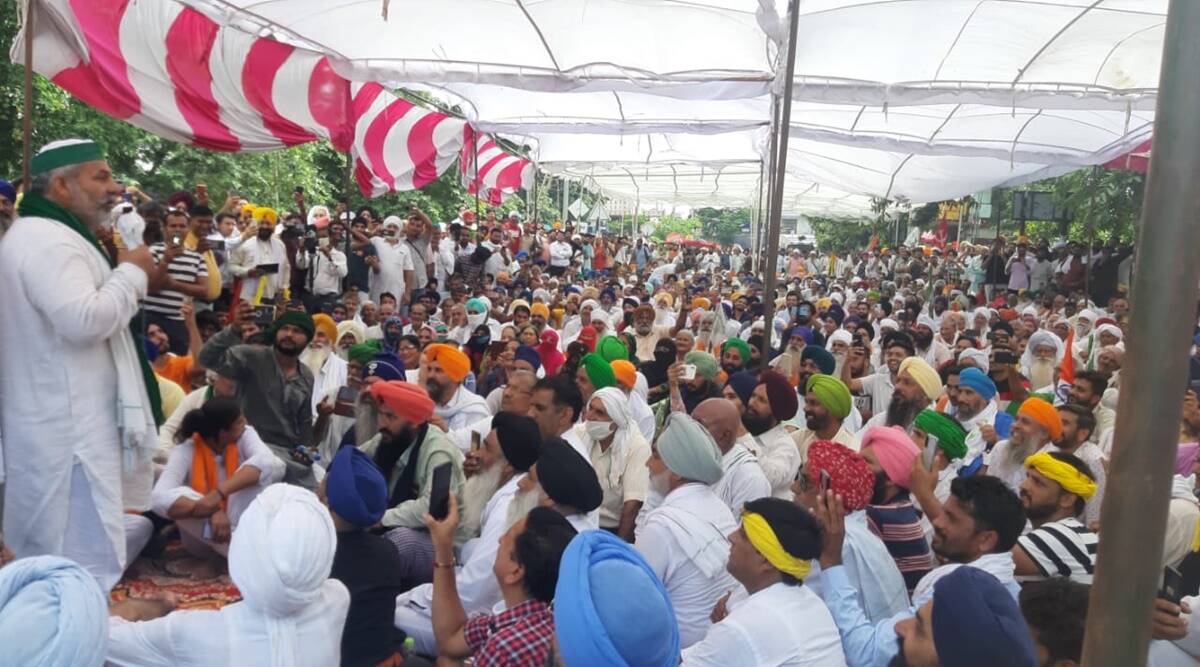 Over 10 lakh farmers gathered at Muzafarnagar in Uttar Pradesh to showcase their solidarity with their agitating counterparts for the past nine months. The city fell short of shelters and space to accommodate the self-motivated and self-sponsored farmers who poured in from 15 states across the country. The scene was nostalgic, with the local people opening up their houses, providing cots and rendering hospitality to the guests. Over 50,000 of them came a day before to make sure that they don’t miss the bus. At the Mahapanchayat site, over 5000 langars (food stalls) were set up.

The farmers unanimously passed a resolution to hold such rallies in all the 18 Mandals of Uttar Pradesh and have called for a nation-wide bandh on September 27. Taking a political stand, it was decided to oppose the BJP govt, and register their protest with the local MLAs and MPs in their respective areas. State-level Sanyukta Kisan Morcha (SKM) units will be formed to accelerate the agitation. The farmers are demanding the repeal of farm laws which they are afraid will do away with the MSP system, leaving them at the mercy of big corporations.

Most media organizations, be it newspapers or TV channels, didn’t consider it to be news worthy to cover the mega gathering of farmers. The full front page government advertisements kept them light-lipped to show their solidarity with their sponsored master. A full front page colour advertisement in a leading English newspaper costs around Rs 15 lakh and on a DAVP subsidized rate, it would be around Rs 10 lakh. None of them dared to publish or telecast the happenings, until the video went viral, wherein some lead TV reporters were chased away from the mahapanchayat site. Several posters of lead TV anchors were displayed with protesting slogans like ‘Go away, Godi Media’ at the venue.

Accusing the present governments of dividing people on communal lines, Bharatiya Kisan Union (BKU) leader Rakesh Tikait shouted slogans of ‘Allah-ho-Akbar’ and ‘Har Har Mahadev’ at the stage claiming that people used to chant these slogans during the days of Mahendra Singh Tikait and Ghulam Muhamad. First time after Independence, the Jats and Muslims have come together and chanted such slogans promoting the unity and brotherhood in the society. The BJP tried to give a communal colour to the chanting of slogans. But, how can the same slogan which was raised during the time of Independence in 1857, become communal now? Even Savarkar’s book “The Indian War of Independence” mentions about this slogan as uniting the community.

Tikait said that the farmers would continue their agitation and such mahapanchayats would be organised across the country in the coming days. While spelling out the 'Mission UP', he said the land of UP would not be lent to those who orchestrated communal riots in the past. “We have to stop the country from getting sold. Farmers should be saved, the country should be saved; business, employees and youth should be saved. We will not back out even if our graves are dug at the protest sites. We will not return till our victory. We want guarantee over MSP,” he asserted.

Meanwhile, thousands of farmers protested in Karnal against the atrocities of the Haryana government towards the farmers a week ago and marched towards the Mini Secretariat on September 7. Unlike the protest in Kabul on the same day, both the farmers and the police force kept their cool and ways were explored to diffuse the tension. The situation was very alarming, as someone could instigate violence mode of protest.

According to Dharmendra Malik, a farmers’ leader, the entire farming community supported the BJP and helped them win over 125/403 Assembly seats from Western UP alone in 2017.  But they have turned a deaf ear to our issues of raising sugarcane purchase price, subsidy on electricity bills; instead they have thrown us into the hands of a few businessmen. The Sanyukta Kisan Morcha, the umbrella body of 40 farmer unions spearheading the agitation, proved that they are above caste, creed and religion.

None of the promises made by the BJP before coming to power in UP in 2017 has been fulfilled. The government has not even purchased 20 % of the crops as promised. The UP Govt had assured waiving of loans to 86 lakh farmers, of which hardly 45 lakh people have been benefitted. The central agency, CSP, found that despite the sugarcane price pegged at Rs 383 per quintal in 2017, the payment was made only at Rs 325 per quintal. And, a sum of Rs 8,700 crore is due for payment to the farmers by the Govt and the mill owners.

Political experts opine that all agitations may not lead to favouring or harming a party in the polls. If that had been the case, the protest of unemployed youths, Railway employees or the Bank staff would have brought down the government by this time. The BJP had fetched 39% of votes in the last Assembly elections, and a negative tilt of 10 % may change the scenario. Also, 61% of opposition votes do not mean a change of guard, unless the opposition parties, like BSP, SP and Congress, come to a consensus on contesting together. Generally, when it comes to voting in North India, the mindset is to support a candidate or the party on the basis of caste and religion.
All is not well with the state BJP too, internal bickering and resentment are at its peak. The developments are yet to see the day light, but are prominently publicized through advertisements. The major achievement is that of distributing 5 kg ration to people during the corona time. The Govt is on the backfoot and the change is inevitable.

Former Union Agriculture Minister Sompal Shastri of BJP said India has witnessed three types of Governments, one that of Ch Devilal, V.P. Singh and Ch Charan Singh who responded to farmers’ need, as they belonged to the farmers’ family. Second is that of Congress, which responded based on the applications or memorandums received. And, the third is the present BJP govt, which has played several plots to bring down the agitation, by calling them Khalistani terrorists, spoiling their tractor rally at the Red Fort, stating it to be an opposition-sponsored agitation, etc.

The general impression is that the farm laws are going to help a few businessmen. 35 % income of farmers has come down. Whatever luring the govt will make is not going to convince the farmers now. You can fool some people for some time. But you cannot fool all people for all the time. Shastri anticipated the BJP to use its ‘Brahmastra’, a possible attack like that of Pulwama or instigating a communal riot similar to that happened in Muzafarnagar.

In the meantime, Opposition parties have extended support to farmers' agitation and have demanded that the Centre accept farmers’ demands for scrapping the contentious farm laws and warned against any attempt to crack down on them. Samajwadi leader Akhilesh Yadav tweeted: “Yesterday’s unprecedented show of unity by farmers in western UP and by teachers and general public in eastern UP has shown that the oppressive, divisive and arrogant power of BJP will never come-back. There is a wave of public opinion against the havoc of BJP. The BJP is over.”

Meanwhile, BJP MP Varun Gandhi described through a tweet the protesting farmers as "our own flesh and blood" and suggested that the government should re-engage with them in reaching a common ground.

The Muzaffarnagar riots of 2013 had driven a deep chasm between Jats and Muslims resulting in huge polarisation of votes as Jats supported the BJP overwhelmingly. But in the wake of farmers’ unrest, the two communities are seen coming together giving jitters to the BJP camp.

Gone are the days when this song was relevant for the media, ‘Hide it under a bushel? No! I am going to let it shine, let it shine….’ At a time when the mahapanchayat was going on, some of the TV channels were portraying the death of a TV star who had passed away three days back. The patience level and non-violence mode of protest by the farmers for the past nine months is laudable. Only time will reveal, if the non-coverage of farmers’ protest was intentional, or due to lack of news sense, or due to political compulsion.