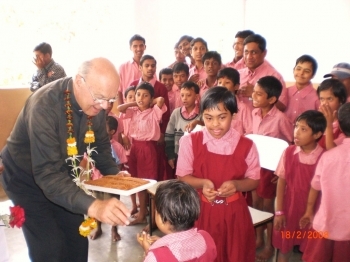 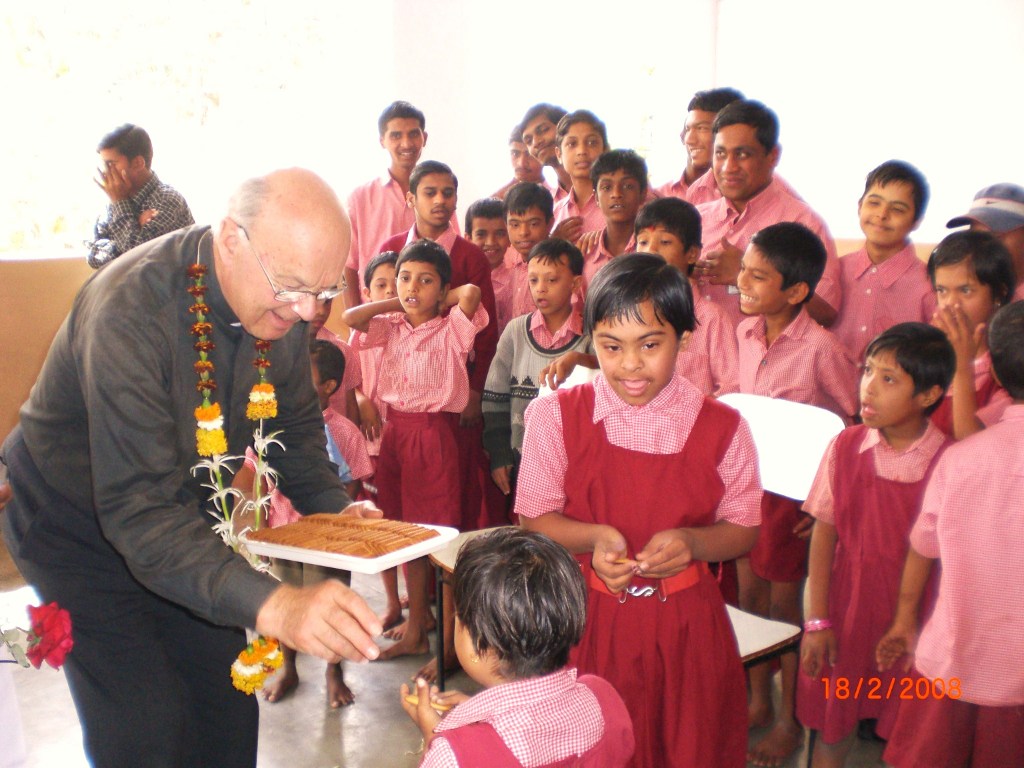 Fr. Linse was at the door to take me to his home at Bottrop in Germany. As he led me to his car, I was curious to see the small trolly that was attached to the car with a label on it, ‘Indienhilfe’. After a few minutes’ drive we reached a place which looked like a municipal waste ground. He stopped the trolly on a weigh bridge and then drove it to the heap of waste nearby. He opened the trolly and started pulling out piles of old newspapers, books and rags. It was in 1989 when I visited him for the first time.

Later, he explained that collecting old papers and books and selling them, running stalls at weekends and organising fund collection walks with the children, were some of the ways he raised funds to support the poor people in India. I had met Fr. Linse in India on two occasions, and had heard of his assistance to various projects in different parts of the country. But I never realized the manner in which he collected funds for Indian missions until I saw it directly.

As we proceeded on our journey, I asked many ques­tions regarding his concern for the mission in India. This time I could see tears in his eyes. There was silence for a while. After some time, he spoke of his childhood in the post-­war period and the hunger he and his mother experienced. He was at the point of death and the doctors had given up all hope of his survival. But God gave him a second birth and kept him alive.

Fr. Linse now spends every moment in thanking God. While visiting India, he insists on travelling second class, simple food and ordinary residence. He en­joys sharing the poverty of the deprived and feels hon­oured when the poor are able to smile in life. I felt that this man was a German with an Indian soul!

On 15 August 2022, ‘Indenhilfe’ would celebrate its fifty years (Golden Jubilee). In 1972 after 12 years of his ordination he founded ‘Indienhilfe’ to support Indian mission. Even at the age of 88, Msgr. Linse is active to support over fifty projects in India. He is writing personal letters to all who are part of his projects.  In Germany he is fully occupied with daily Holy Mass, bringing Holy Communion to the sick and the old. He spends much time doing phone ministry. He stays alone in the house belonging to the diocese and does all works by himself.  With his hard work he had gathered funds and sent a total of Euro 4,458,480 to different Indian projects.

People in Germany especially in Bottrop town know what Msgr. Linse does for Indian mission and supports him. He has sensitized people about the importance of showing compassion to strangers even in a faraway country like India. On the occasion of honouring Msgr. Linse with ‘Federal Cross of Merit’ city Mayor Tischier said the following words, “For you have not only opened your own heart to other people, but you also have the gift of opening the hearts of your fellow men to the worries and needs of strangers. In this case, it is about people who need our help in India, thousands of kilometers away.”

Msgr. Linse was active 20 years as a secondary school chaplain and in the pastoral care of the parish.  He made use of this opportunity to sensitize the young students and got their support to his projects in India. He continued to involve students in his projects. He has taken students and adult friends to India for exposure to motivate them. Because of the involvement of young students, he renamed his India project as ‘Indienhilfe Bottroper Realschuler’.

The India Aid blossomed, students collected old material, organized fundraising runs for which they sought sponsors in their families and their neighbourhood. There were exhibitions and lectures, cake sales at school festivals and much more.

The main focus of Msgr. Linse was education of people with disabilities of all kinds, the physically challenged, hearing impaired, the blind and people with mental disabilities and vocational training centers. Indienhilfe builds schools for poor children, boarding houses, provides school uniforms, books and school fees. It helps construction of clinics and provides medicines.

Msgr. Linse continues to be passionate about his mission for the poor and the marginalized in different parts of India. He is an example for people who make excuse of retirement and get tired and rusted. His dynamic life should challenge all who are lazy, mediocre and make all kinds of excuses to do good when they are mentally and physically fit.

Reflecting on the inspiring life of Msgr. Linse and his outstanding service to the poor and the marginalized people of India I always felt that he deserved to be honoured by Indian Government. Since we could not have the political influence for such awards, Universal Solidarity Movement organized a public felicitation in the city hall when he visited us in 2008. The city newspapers interviewed him and published about his great works.

Reflecting on the compassion and commitment of this German priest for the poor and the marginalized people in India and the way he engaged the young students of his school in his project, I asked myself ‘why don’t the priests and religious who are managing thousands of schools focus to sensitize the students who are in their schools?’ What they need is vision, compassion and passion to realize the vision.

Msgr.  Linse's is not an isolated story. Many such men and women promote the socio-economic projects in developing countries. The whole question is whether the beneficiaries, the 'middle-men', realise the sacrifice and the spirit which go to collect the funds. 'Are the dreams of the donors in foreign land, who sacrifice and work hard, realized in its fullness?

The grandeur of the church structures in India depends much on the contributions that people in Europe and America make. Perhaps this glamour has become the cause of much misunderstanding among fanatic anti-Christian groups. Surely, the Kingdom of God has spread in India if it means the multiplication of seminary buildings, novitiates, big modern churches, estates and various institutions to keep the clergy and religious occupied and provide  them a comfortable life. Is this the Kingdom of God which Jesus envisaged?