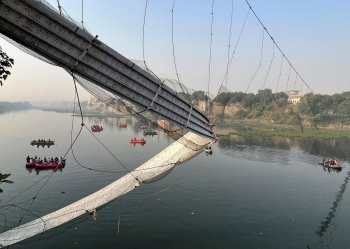 Fraudsters Have a Field Day

It is time the people get awakened to disenfranchise political fraudsters from their privileged positions of power and self-sought glory.  Day in and day out, we are fed with statements and pronouncements aimed at whitewashing their misdeeds and cathartic performance.

Take the case of the Morbi bridge collapse in Gujarat on October 30. It happened as the countdown to the Gujarat elections started. Political leaders started passing the buck without owning up responsibility and probably saying it was an act of god, meaning ‘an instance of uncontrollable natural forces in operation.’

Compare it with the collapse of the Vivekananda Road flyover before the Bengal Assembly elections in 2016. Remember Prime Minister Narendra Modi’s pronouncement then: ‘It is not an act of God, but an act of fraud.’ He was batting for a winning score in the Bengal election. Not surpassingly, the party under his leadership had to bite the dust in the election. The ‘lion of Gir’ lost to the ‘tigress of Bengal’. It is no wonder the opposition parties are targeting Mr. Modi for not owning up the fraud factor in Morbi bridge collapse and reminding him of his visceral attack on Bengal Chief Minister Mamata Banerjee attributing to her the fraud factor.

The 754-ft-long pedestrian suspension bridge, Jhulta Pul, built over the Machchu river was 137 years old and built during the British era. Such an old bridge should have been sold to a scrap iron dealer and, if needed, make another bridge. Instead, the renovation of the rickety bridge, hailed by the Gujarat government as ‘a technological wonder’, was entrusted to a company famous for making electrical home appliances. The head of Morbi’s civic body alleged that the bridge was opened without fitness certificate. But the mystery is that the tragedy took place after four days of its opening. Here the question is how could the company keep the bridge open for four days under the very nose of the Municipality without getting clearness certificate?

We have seen iron bridges constructed during the British era collapsing like house of cards in different parts of India because they had outlived their use value. But, with foolhardy sense of devotion to ‘old is gold’ attitude, our politicians go for quick-fix solutions costing the life of many innocent people. What is revealing is that politicians, who go for such window-dressing operations, show their underperformance, criminal negligence and, possibly, connivance with corrupt elements and business lobbies.

Instead of passing the buck, the political leadership should have owned up the responsibility and made reparations for their criminal negligence. The police administration should have acted honestly to haul up the state minister and his department personnel who gave the contract to a company that could not deliver. Even before clearance certificate was given the bridge was opened. How come that the ever-watchful eye of the police and the state authorities chose to look the other way. Many more such questions are emerging even as over 140 lives are lost and many more missing.

A BBC report questions how such a place, which attracts thousands of tourists, lacked ‘safety measures to deal with an emergency; ‘How come there were no policemen nearby, no divers and no boats?’ The Additional District Magistrate N.K Muchchar’s statement was strange: ‘We got divers, swimmers, ropes, boats and fire services here in ten minutes.’(Quoted by BBC). That is how our officials think. Let the tragedy happen and then we shall look for rescue measures.

During Covid season, many people died like flies and were given sand dune burials. The political responsibility went hiding by believing that the ‘act of God’ was uncontrollable. It is easy for our politicians to pass the buck. The collusive character of the Morbi bridge contract is becoming evident. Reports say that the Oreva Group (Ajanta Manufacturing Private Ltd.), a domestic appliances manufacturing company, secured repair and maintenance work for a 15-year period. Oreva, in turn, was said to attribute the under-performance to a third party Devprakash Solution. Contractors giving petty contracts and enjoying a backseat drive are very common in India.

Man-made tragedies cannot be swept under the carpet through blame game. The Morbi disaster leaving many dead, many more missing, and many families bereaved is one of the worst tragedies in our independent India. Will our politicians and bureaucrats learn from these disasters rather than keep on making wanton statements to hoodwink people? Such politicians and bureaucrats need to be silenced from their mouthing utter nonsense and stopped from their parading as buffoons in joker’s clothing even as tragedies unfold before them. One could say, even with his lavish clothes and glittering displays, the Raja is cat-walking naked!