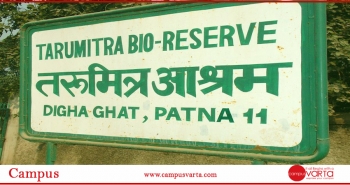 That morning hundreds of school-students landed on that historic, large Gandhi Maidan in the heart of Bihar’s capital city Patna. They removed all the hoardings fixed onto the trees. Then they pulled out the 5-6 inch deep nails that had been hammered on to the 200 odd trees. Next morning all local newspapers carried out the story on the first page with photos. That was the end of nails on those trees.

These students call themselves the Taru Mitra, meaning in Hindi and Sanskrit, Friend of Trees. To protect and promote a healthy environment on earth, Catholic Jesuit priest Father Robert Athickal started it in Patna’s St. Xavier’s School in 1988. Students from the nearby schools were then roped in to join the movement under the leadership of a ninth grade boy Anindo Banerjee of Loyola High School, Patna.

Today the movement has nearly 2, 00, 000 school and college students in more than 1000 high schools and colleges in many parts of India. Many social activists and journalists have also joined the movement. It has also many full-time volunteers abroad. In 2005 the UN conferred it a Special Consultative Status. They have taken part in many international summits on environment. Tarumitra has become a household name now.

On Rakhi day the Tarumitras tie Rakhis on “Brother Trees”.  The Bihar chief minister, his officials and many students now follow it.

The purpose of the Tarumitra is to spread information about ecological sensitivity. It organizes campaigns for the preservation of biodiversity. The Tarumitras have taken out massive rallies, protest demonstrations, resisted the felling of trees, built road side gardens, cleaned up garbage dumps, planted rare variety of trees and held house to house awareness schemes. It has also set up a plant to fabricate solar cookers and it joins hands with similar organizations.

A tree called Vilayati gal gal, known as the Flowering Queen of Asia, was cut down in January 1993 in front of the Sahyog Hospital at Patliputra Colony, Patna. It was the only one of its kind in the entire eastern region of the country. Deeply hurt, hundreds of Tarumitras held a funeral procession by carrying the branches of the ‘killed’ tree and burying it near the Sahyog Hospital.  However they took care of its stump. They were delighted to see two bunches of yellow flowers sprouting within a month.

The Freedom Fighters’ Association of Patna wanted to install statues of freedom fighters by uprooting the 125 years old Rain Tree, Kala Shrish, on the Serpentine Road, Aug 9, 1991. The Tarumitras formed a human chain around the tree, safeguarding it from the axe. They filed a police complaint under the Environment Protection Act. The State Minister of Forests and Environment assured the students that the tree would not be chopped down.

In ten acres plot of land donated by the St. Xavier’s School in 1994, the Tarumitras have planted more than 400 rare plants and trees. It has also a large genetic nursery, a tissue culture lab and accommodation for about 100 students for nature related camps.

“Imagine, if trees gave off Wi-Fi signals, we would be planting so many trees and we would probably save the planet too. Too bad, they only produce the oxygen we breathe.”