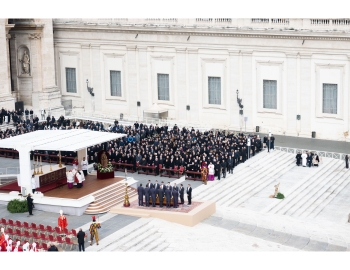 Funerals are usually dour affairs, nothing to write home about. Yet, having witnessed some interesting funerals on TV in the recent past, I did find some lessons to be learnt and thoughts to be shared.

The first one was that of Queen Elizabeth the Second (QE II) who died on 8th September 2022, aged 96. Her funeral was full of pomp and pageantry for which the British are renowned. This is faithfully followed by Indian Army regiments founded in the colonial era.

A friend, who happened to be in London at the time, confirmed the military precision and meticulous planning of the funeral. I had then observed a few things. The first was the complete lack of emotion, the proverbial British stiff upper lip! I was intrigued that the casket was closed, draped in a flag, and the body never exposed for public viewing. It was only later that I came to know that it was hermeneutically sealed in a lead coffin, which is the norm for the monarchy. No wonder that there were leaden ex

When the symbols of the monarchy were handed over to her son King Charles the Third, I noticed that together with the sceptre he was handed over a golden orb with a mounted cross. The commentator then said that it signified being head of the Church (Anglican) and tasked with defending and propagating Christianity around the world. Those who know the new king’s proclivity for syncretic religion have already been asking if he will be later crowned as Defender of THE Faith or simply as the defender of faith?

The next funeral that I got a glimpse of was that of another king, that of another orb – the football. Pele, though not a head of State, did lie in state in his home ground football stadium, draped in the Brazilian flag, while 1,50,000 people paid homage.

The third funeral was that of another head of State and defender of the faith, Pope Benedict XVI (PB XVI). Pope Benedict’s funeral was in sharp contrast to that of Queen Elizabeth II, marked by its simplicity and deep emotion. The 50,000 people present on the occasion were applauding and chanting when the plain wooden coffin was brought out for the requiem mass and then taken inside the basilica. Earlier, the body, in full liturgical dress, was displayed for two days  in which 1,50,000 paid their respects.

I noticed that Pope Francis, who presided over the liturgy, looked shattered, as with a personal loss. I saw just two Swiss Guards in their traditional regalia. The twelve chamberlain pall bearers wore sombre black frock coats. Having served as an altar boy in boarding school for several years, I could vibe with the solemn Latin chants by the Sistine Chapel choir -- Dominus Vobiscum, Et tu Spiritu tuo, Ave Maria Gracia Plena and Agnus Dei.

Though there were many dignitaries from around the world, security was minimal, almost invisible; in sharp contrast to the assault weapon toting security personnel that accentuate the strong-arm image and cult of our desi VIPs. Even village headmen in India flex their security muscles. Only some African dictators beat us when it comes to flaunting their security.

Two other things caught my attention. One was the simple wooden crib, again in contrast with the shiny decorations put up in many parishes and homes.  Alongside was a gigantic Christmas tree, a real one, cut down from a forest. We know that Santa Claus and trees have robbed Christmas of its true meaning. So, what need of this in St Peter’s Square? Besides, it was incongruous at a funeral. Francis is a strong advocate of environmental issues, so why did he perpetuate the counter witness of felling a tree?

The other jarring note caught on camera was of a man in a hood coming up to receive communion. He knelt to receive it on his tongue. When the priest hesitated, as communion was being given in the hand, the man seemed to make a grab for it with his mouth. The priest was taken aback and the man retreated. It is not clear if the man said or did something sacrilegious. However, some conservative commentators were quick to say that this was symptomatic of the church moving away from “tradition”. Shades of Ernakulam here! What constitutes faith and/or tradition merits a separate discussion.

Images of the coffin being taken to the crypt below the basilica reminded me of my visit there in 2017. I had felt particularly blessed to pray at the tomb of Pope Paul VI whom I hold in great esteem for the way he steered the bark of Peter in the post-Vatican II churning.

Let us also recall what Francis said about his predecessor. EWTN News reported that they shared a special understanding of each other and the weight of the papacy. Francis’ final gesture of bowing before the coffin and touching it was indeed touching. He obviously did not allow their contrasting pontificates to come in the way of mutual respect, though many conservatives are desperate to highlight the differences.

The day after the funeral I received a WhatsApp message that purported to be Francis’ eulogy/obituary. Though it came from a respectable source it did not ring true. It sounded more like some new age guru. With some effort I was able to get the English translation of the original text in Italian. It began by quoting the Gospel of the day (Lk 23:39-46) “Father into your hands I commend my spirit”.

I quote some extracts: “This is the invitation and the programme of life that he quietly inspires in us. Like a father (cf Is 29:16) he wishes to shape the heart of every pastor … You belong to me, you belong to them, the Lord whispers, you are under the protection of my hands … my heart. Stay in my hands and give me yours … Like the Master, a shepherd bears the burden of interceding and the strain of anointing his people, especially in situations where goodness must struggle to prevail and the dignity of our brothers and sisters is threatened (cf Heb 5:7-9). In the course of this intercession the Lord quietly bestows the spirit of meekness that is ready to understand, accept, hope and risk, notwithstanding any misunderstandings that may result”.

The eulogy is laced with scriptural quotes and Jesuit spirituality, painting Benedict as a humble and faithful servant of the Lord and the Gospel, rather than singling out any of his achievements, acts or ideas.

I shall now share some comments from journalists published from Rome. Vimal Tirimanna, probably a Sri Lankan theologian, says: “As a young progressive theologian Joseph Ratzinger’s contribution at the Second Vatican Council can never be forgotten. Equally unforgettable are the radical changes in his theological thinking in the aftermath of Vatican II which were inversely proportionate to his gradual rise on the hierarchical ladder”. Tirimanna also faults PB XVI for being too Eurocentric and unable to come to grips with the contextualised theology of Asian countries that are rich in their own spiritual traditions.

Writing in La Croix International, Loup Besmond de Summeville observed that some conservative supporters of PB XVI wanted to make his funeral a show of strength even though just 50,000 turned up, in contrast with the 1 million for that of John Paul II. He says that they wanted to “make this funeral a demonstration of strength from Catholics attached to a vision of the church developed by Joseph Ratzinger as opposed to that which is being championed by Francis”.

Those opposed to Pope Francis’s reformist agenda based on the ecclesiology of Vatican II have been spreading canards about his resignation on health grounds. Nothing could be further from the truth. His extension of the Synod on Synodality to 2024 is a clear indication of that, as also his plans to visit several countries.

PBXVI may have regressed theologically with time. Pope John Paul II also, towards the end of his papacy, fell back on pious devotions and a plethora of canonizations, in a way deviating from the scriptural basis of our faith. Not so with Francis. I see him emerging stronger and more resolute. However, I would agree that with PBXVI peeping over his shoulder, Francis may have had his restraints.

I feel that he will now come out with all guns blazing, calling for radical reform and renewal of the church, hopefully leading up to Vatican III. So, there are many fundas to be found in funerals.

(The writer is the Convenor of the Indian Catholic Forum. He may be contacted at noronha.kp@gmail.com)