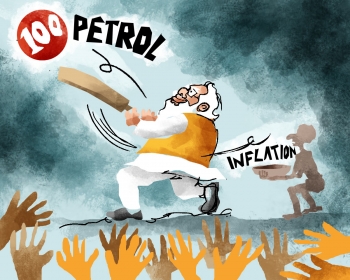 Gain for Govt, Loss for People

A homemaker in India doesn’t commute every day; so why should she be worried about the skyrocketing fuel prices? Besides, majority of people don’t own or drive a personal vehicle to worry about the fuel prices that have touched an all-time high of Rs 90-100 a litre; so why is everyone worried about it?

The fact is that unless we are able to shift to non-conventional energy resources fully – and that will take a while -- the oil will keep regulating human lives across nations and the world and giving us deep worries, as it’s happening across the board right now.

A homemaker’s budget will go upside down with the inflation that is inevitable with the soaring oil prices; the school fees will go up; prices of food items will soar; a working person would need to pay at least 10-15 per cent extra for using public transport. Likewise, the prices of all goods that are transported – and most are – will go up by at least 10 per cent and it will eventually lead to a cumulative rise in prices of all goods and services.

This is happening in quick succession to the people whose earnings have taken a big hit during the corona lockdown. Many have lost jobs or are working on underpaid assignments while some are forced to live with salary-cuts.

One is not even counting the job and livelihood loses due to the most controversial and now as it’s proven the wasteful decision of demonetisation of the Narendra Modi’s first tenure as Prime Minister.

So, when the system was coming into some positivity, first the government levied 2% oil cess in the budget, and now the oil prices have gone through the roof.

Prime Minister Narendra Modi quickly escaped getting the blame for what will be the most devastating development for the common people. He said the earlier regimes were to be blamed for not having thought of ideas to reduce India’s dependence on imported oil. India imports 80 per cent of its oil and its bill eats into much of the foreign reserves.

However, what the Modi government should explain to a homemaker, whose budget would soon go haywire, is that when the oil prices were at the lowest in the world till January 2020, especially during the corona period, why the benefit was never passed on to the domestic oil consumers?

The public sector and private companies that continued to charge the consumers normally that is four to eight times higher than the prices of crude, not passing on the relief of low international crude prices to them, got richer in that period years.

The government had long ago deregulated the oil prices and companies are allowed to fix the price as per the turns of the market. On top of it, the state and central governments levied their respective taxes on the oil, making it the most overprized commodity.

In India, the highest percentage of oil price, which a consumer pays, goes towards the taxes, levied separately by the States and the Central government. There is a proposal for levying a single tax or maybe bringing petrol, diesel and domestic LPG under the Value

Added Tax (VAT) regime to bring down the oil prices. The Narendra Modi government is not even hinting of understanding this simple logic that could bring relief to the people.

While the government is leaving the oil consumers to the mercy of the companies, it’s adamant on a small assurance to the farmers, who have taken to the path of agitation in protest against three farm laws, that there will be guaranteed Minimum Support Price (MSP) for a few essential crops and not leave them completely at the mercy of the market forces.

The farmers are not so dynamic a community to easily come out of their ways and comfort zones of the MSP regime and embrace the perceived regime that will take their crops and other products to the Utopian global markets. The farm issue is a complicated one and is more about the intention of the government to wriggle itself out of the responsibility of supporting the farmers, the majority of whom are living on the edge, and not about improving their condition.

Deep down farmers have a fear that the government will end the APMCs and the MSP regime slowly and leave them in the lurch and for this, they want a law on guaranteed MSP.

The farmers have been camping at three sites inside the national capital and yet the government hasn’t made any serious effort to understand their problems or worries. This is despite the Supreme Court intervening and asking the government to shelve implementation of the contentious laws.

Instead, the Modi government has used brute force against the farmers. Instead of an honest approach, it has used the policy to make them get tired of prolonged protests. In places like Uttar Pradesh, the government even tried to divide the farmers to sabotage their agitation.

The Modi government has an enormous mandate and it can, by all means, take bold decisions. The Prime Minister himself is so full of ideas. Unfortunately, he never used an imaginative approach to deal with farmers’ distress or towards their strike.

The contrasting pictures of the Modi government’s approach should worry all the right-thinking people.