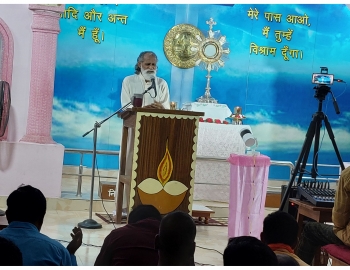 This reflection of mine begins with two Generals, but doesn’t end with them. It is actually about an action packed octave from Sunday 25th September to Sunday 2nd October.

I met the first General in Kanpur on the 25th. She was Sr Elvira UMI, former Superior General of the Ursuline sisters. I had last met her in 2017 when she was in her Generalate in Rome. That convent, like so many across Europe, was converted into a bed and breakfast centre for tourists and pilgrims. Across Europe empty convents and monasteries have been converted into “Monastery Stays”, open to the public. After 18 years in the Generalate, Elvira was now an ordinary member of the community in her convent here. No retirement benefits or perks.

Four days later I was in Matridham Ashram, Varanasi, where I met another former Superior General, Dr John Satyanand IMS, of the Indian Missionary Society. He too was now living in a cramped room in the Ashram, devoid of power and pelf. Despite his advanced age, every evening he was to be found working in the garden of the 8 acre campus of the Ashram. Both Elvira and Satyanand had studied in the Papal Seminary, Pune; the latter being an authority on Indian spirituality – Hinduism, Buddhism and Jainism.

Yet they were now living ordinary lives, devoid of all ostentation. This was the first general observation of this octave. If those in religious orders can live like this then why can’t other powerful ecclesiastical leaders return to their roots as humble servants, having done their duty (cf Lk 17:10)?

My wife and I spent 4 days in the Ashram, as I felt the need for spiritual recharging. The present head of the Ashram is Swami Anildev IMS. He had spent two years of regency working with me in youth ministry in 1980-82. This Ashram belongs to the IMS, founded by Rev Gaspar Pinto of Mangalore sometime in 1941. His clarion call was “Rise India”. He had a vision of bringing about an alternative to the foreign missionaries and their parish – school – hospital style of mission.

He envisioned being Indian Christians, not so much Roman or Latin. Hence the ashram way of life became integral to the IMS. His inculturation preceded Vatican II by 20 years. Though my association with the IMS goes back 53 years, I first visited Matridham in 1975. It was alkaline, barren land. Several IMS pioneers, by digging trenches and planting trees gradually converted it into the verdant green that it now is. Miracles do happen, and they are not contrary to nature.

Back then there were just thatched huts that have gradually morphed into modern, but simple, accommodation. Despite a late resurgent monsoon we were spared from mosquito attacks as every room and hall had steel meshing. So we could pray or meditate without the infernal buzz.

I had hoped to also remain undisturbed by the buzz of my phone, even though I keep my numbers private. Yet I got a buzz that could not be termed an intrusion. I received a viral video about Dr Roshan Jacob IAS, the Commissioner of Lucknow Division. We had become close family friends from the time that she was posted as District Magistrate, Kanpur in 2014.

The video showed her being moved to tears at the plight of some accident victims that she visited in a hospital; for whom she ordered immediate medical care. It also showed her wading through knee deep flood waters. The news anchor contrasted her with another lady IAS officer in Bihar who was caught on camera being grossly insensitive to the plea from some girl students for sanitary napkins. It also showed some ministers being carried on the shoulders of policemen during a visit to flooded areas, lest they got slush on their spotless white khadi!

The contrast was not lost on the viewers. What many may not know is that Roshan is a fervent Christian who always wears a cross around her neck. She is known for her integrity, compassion and efficiency. Her Christian identity has in no way hindered her being entrusted with several sensitive assignments by Chief Minister Yogi, who is otherwise perceived as being anti Minorities. The lesson is that if we are truly Christian our light will shine. Generally speaking, this is true, even in adverse circumstances.

Back to the Ashram. Having lived in Jyotiniketan Ashram, Bareilly from 1975-82, at a time when it did not even have electricity, I have always cherished the frugal Indian Christian way of life and spirituality. I believe that it is the way forward for the Church in India. Ironically, most Christian ashrams were founded by foreigners – Bede Griffiths, Henri le Saux (Abhishiktanand), Krusbhakt, Stanley Jones and Murray Rogers. We Indians, with our obsession with Gora Sahibs and the lure of the West, have not valued our rich Indian spiritual heritage.

Look at the number of foreigners coming to India for spiritual solace and the deeper meaning of life. The Church in India has made no attempt to reach out to them, as we continue with the Gora padre model of being church; something that they have already rejected in the West, as epitomised by empty churches and “Monastery Stays”. We lament the brain drain to the West, but are blind to the spiritual train to the East. Generally speaking, we are an institutional success but a spiritual failure. Through education we ignited minds, but not hearts.

Matridham has multiple functions within the Ashram itself. Darshan Bhawan, as one enters the gate, is open for prayer 24x7. Some of its services are live streamed across the globe. Satsang Bhawan is an open air shed where Mass is celebrated on Sundays. Thousands, mostly non-Christians, throng the services. It has given rise to what is known as Khrist Bhaktas, un-baptised disciples of Jesus. Vardan Bhawan is meant for intercessory prayer where a few women gather everyday. Daily Mass is celebrated in Dhyan Bhawan, as also teaching sessions in English. Everything else is in Hindi.

The Mandir is the chapel that houses the sanctum sanctorum. It is reserved for private or silent prayer. Upasana Kutir is a small room where a person goes to pray in solitude for three days without food or human interaction. Only water is permitted. I had a similar experience in the ashram of Rev Dan Rice SJ in Soko, Bihar, in 1980. It may be described as a near death or out of body experience. Not for the faint hearted.

Sadhana Bhawan is where Bible courses and weekly retreats are conducted. Aashray is the centre for the mentally afflicted. There are about 30 inmates cared for by sisters from the Franciscan Clarist Congregation, whom Anildev describes as a “really genuine congregation”.

He himself joined the Ashram in 1992 to look after its communication centre. In 1995 he was given charge of the Ashram and has been there ever since. His spiritual talks are broadcast from the studio above his room. Their YouTube channel has 2,50,000 subscribers and 50,000 views a day. That is huge. Despite that, they have resisted going commercial. So it has no advertising revenue. It requires tenacity of purpose and a clear vision to resist the commercialization of religion. Anildev insists that they do not solicit funds, yet the Lord provides.

The Ashram is situated in Varanasi (Kashi) that is now the hotbed of Hindu revivalism, besides being the Prime Minister’s parliamentary constituency. Yet, despite its evangelical nature, the Ashram has no security guards or watchdogs. The main gate, that opens onto the main road, remains open at all times. The fact that nobody attacks the Ashram, a miracle in itself, is because it is a non-threatening presence.

While commissioning his disciples Jesus had said, “I send you as sheep among wolves” (Mat 10:16). Wolves are not threatened by sheep. To the contrary, they are attracted to them. If they devour the sheep, the sheep would actually be incarnated (become flesh) in them. This is the real incarnational approach, the Word becoming flesh and dwelling among us. Generally speaking, this should be the missionary position of the Church in India. Only then will it bear fruit that will abide (cf Jn 15:16).

On the flip side I wasn’t quite comfortable with the Eucharist being exposed in a glittering monstrance that seemed to draw more attention than the Lord himself. I also felt that the online streaming of prayer sessions could degenerate into aggressive tele-evangelism. Pope Francis is also not in favour of online worship. Finally, the frenzied chanting of Halleluiahs did not impress me. How many of those chanters would know that Halleluiah began with the psalms of King David and were later incorporated into the Roman liturgy? It means “Praise Yahweh” that in turn is understood in Greek as “He who is”, and in Latin as “I am who am”. It comes from the root word El in the Semitic languages, ilu in ancient Akkadian and ilah in Arabic, now pronounced as Allah by Muslims.  It has the Hebrew root verb hawah that simply means “to be”.

Halleluiahs and other minor hiccups apart, I would emphatically state that Matridham Ashram is a symbol and torch bearer of a living church. It is not enough to “visit” the Ashram. That would be like “generally speaking”. To win a spiritual battle, even a spiritual one, Generals are not enough; we also need many foot soldiers. To be specific, each one of us Indian Christians needs to become a little Matridham Ashram in his/ her own little way. My prayer is for more dedicated persons to come forward to serve in the Ashram as “The harvest is great, but the labourers are few” (Mat 9:37).

•    The writer has a long standing association with Matridham and the IMS.