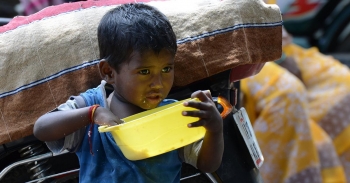 We are hungrier than ever. This is what the latest report on Global Hunger Index (GHI) says. India has slipped to the 107th position out of 121 countries when it comes to hunger. Last year, we were placed at the 101st position. Clearly, our performance has gone down. Worst of all, we are behind our neighbouring countries -- Sri Lanka (which is going through a huge economic crisis), Nepal, Bangladesh and even Pakistan!

Published by Concern Worldwide and Welthungerhilfe, the report is brought out every year, based on the official data released by various countries. The idea is to bring the issue of widespread hunger to the forefront leading to policy formulation, implementation of corrective measures and impact measurement. Yet, we have not seen much progress in this aspect for the last many years. The pandemic accentuated the situation with reduced income levels, leading to scarcity of resources to take care of the basic needs.

This time too, the Indian government has dismissed the report, claiming that it is intended at tainting India’s image as a “nation that does not fulfil the food security and nutritional requirements of its population.” Not only this, questions have been raised on the methodology that was used for measuring hunger.

It has also been said that three out of the four variables are used for children, so how can it be representative of the entire population? Coming to the fourth indicator – the proportion of undernourished population -- the government claims that it is based on an opinion poll covering a sample size of 3,000 people.

Lastly, the government did praise its efforts in providing additional foodgrain to around 80 crore Indians over and above the entitlement under the National Food Security Act. Even the supplementary nutrition provided to 1.78 crore women and 7.7 crore children through the Integrated Child Development Scheme and the financial help of Rs. 5000 to 1.5 crore women at the time of delivery of the first child. It is like beating your own drum while ignoring the stark realities.

Well, before we actually, deep dive into the claims made by the government, let's look at what the GHI report says and how it is calculated? The index is calculated after taking into account four indicators, which “captures the multidimensional nature of hunger”. It focuses on undernourished population (percentage of population having low calorie intake), child stunting (proportion of children under five having low height for age), child wasting (under five children having low weight for their height) and child mortality (children dying before they turn five). All of these indicators have a different composition in the GHI score.

Child wasting and child stunting each make up one-sixth of the GHI score while each of the other two indicators make up for one-third of the score. The index is calculated on a scale of zero to 100. The lower the score the better it is. A score between 20 to 34.9 is categorised as “serious”, which is where we fall with a total score of 29.1.

The report has given reasons as to why this method is one of the best ways of calculating the severity of a country's hunger crisis. The first indicator actually measures the extent to which people have access to food while the other indicators relating to children not only measures their current nutrition status but also highlights the high risk of their illness, poor physical and cognitive development and even death. This combination “eliminates the effects of random measurement errors”, the report says. In fact, the UN’s sustainable development goal (SDG) No. 2 (zero hunger) includes all these four indicators. Interestingly, India is also a signatory to the SDGs, which also shows that as a country we have agreed to these indicators.

Not only this, child malnutrition and mortality data have been major indicators for decades for ascertaining the performance of the whole population on nutrition. It is a fact that malnutrition during early years of a child is difficult to reverse during adulthood. A child under five with stunted growth or wasting is less likely to regain its health even if he/she is able to get access to adequate nutrition during the later years. This shows that the questions raised on the calculation of GHI are not appropriate.

Similarly, the report also says that these indicators were calculated based on the data published by the respective governments, including India. In other words, the contention that the data was based on opinion polls does not hold true.

Coming to the government’s initiative of providing additional foodgrain and the anganwari initiatives, the fact is but for these schemes India’s performance on GHI would have been much worse!

Before refuting the report, the government must revisit its own official records. The data published by the national family health survey (NFHS-5) shows similar results. Interestingly, the indicators used to calculate malnutrition amongst children were the same. The report had presented the poor state of children even in richer states like Kerala, Gujarat, Maharashtra, Goa and Himachal Pradesh. Gujarat, the model state, was no exception. In fact, the report was based on the data collected during the pre-covid times! How can the post-Covid data present a totally different picture?

If we look at the latest World Bank report titled “Poverty and shared Prosperity”, it says that more than 53 million people have been pushed below the poverty line in India. It means they did not even have $2.15 (Rs.180/-) a day for meeting their basic requirements. This is despite various schemes announced by the government.

Another report by Azim Premji University shows that people in rural regions were highly dependent on the Mahatma Gandhi National Rural Employment Guarantee Act (MGNREGA) for their survival during the pandemic. So much so, 20 to 80 percent of the income loss was met from the wages they earned from this scheme. This was the case for households, who had found work in both pre-covid and during-covid.

For the households, who had no work in the pre-covid world, MNREGA compensated anything between 20 to 100 percent of income loss from other sources. However, nearly 40 percent of the job-card holders could not find even a single day of work under the scheme. It is a testimony to the extent people from the marginalised communities suffered due to the pandemic.

So much so, eight out of 10 households recommended that MNREGA should be extended to provide 100 days of employment to all the members of the household instead of only one person! In case, the unmet demand was to be met, the government would need at least three times the budget it spends on MNREGA! The fact that the report is based on the data collected till December 2021 also shows that stories claiming that India is back on the track as far as its growth is concerned are not true.

Have the powers that be ever wondered what would have led to this crisis? After all, every report cannot be ignored and the entire world can’t be conspiring against our country to malign its image. In fact, globally, around 70 million people have slipped below the poverty line. The magnitude is much higher in India as compared to other countries. This could be attributed to the inadequate financial relief packages during the lockdown and subsequent waves of Covid-19 and strict administrative measures.

For example, the government suddenly announced a complete lockdown without any preparation. Resultantly, the Indian economy contracted by around 6 percent while the global economic contraction was only 3.3 percent. In fact, China imposed lockdown only in the areas where the concentration of Covid-19 cases was on the higher side. This did not bring economic activity to a complete standstill. In our case, unemployment shot up to new heights. The supply chain for essential commodities was suddenly disrupted. Limited supply also made these items expensive, making them unaffordable for many.

Coming to the relief packages, India spent only 2.2 percent of its GDP which was way less than the 4.7 percent allocation by emerging markets/developing countries. The developed nations spent close to 8.5 percent of their GDP to help people during the economic crisis.

In such a scenario, if hunger and poverty are on the rise, should we be surprised? Should the government not accept this crucial information gracefully and work on rectifying the situation? At least, this is what we expect from a government that believes in “sabka sath, sabka vikas and sabka vishwaas.

Hunger is a silent pandemic, affecting our future generations and must be addressed on a war footing.

(The writer, a company secretary, can be reached at jassi.rai@gmail.com )