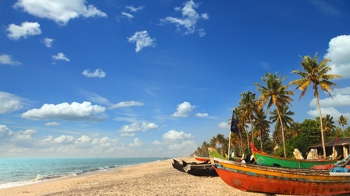 For a state that takes pride in showcasing its glorious past and everything that is unique about the region, it comes as a huge let down to have visitors to this glorious paradise riding roughshod over the feelings of the locals.

As the epitome of hospitality, Goa has remained unmatched. For nothing has it been touted as the most favoured travel destination globally.

The state is known to have slipped into a ‘tourism mode’ even before it realized the true potential that could one day transform it as a formidable force to reckon with in this field.

The scenic settings and the fun-loving people with their susegado culture were attractive distractions that further gave the expanse a mystic aura about itself.

But one can’t help but nurture a feeling that it was the sudden transformation as a global hub of tourism that has cost the state dear.

Initially it was the 5-star culture brought in by hotels that described a style of comfort and elegance affordable only to their rich clientele which gradually made Goa a costly place to be in.

The advent of Konkan railway ushered in an era of commuting connectivity which made travelling all the more easier for people. Air travel too has become more accessible for the middle class.

Meanwhile, the ‘Charters’ were bringing in an influx of foreign tourists and to this date they continue to give hope for Goa’s beleaguered tourism sector. It is estimated that the sunshine state contributes a major share of India’s charter business.

Goa had thus become far more accessible on the national and global map besides various avenues were opening up for both the tourists and those wishing to cash in on the tourism boom.

And then began that phase of tourism in Goa which projected the region as everything else but the serene locale that it is popular as!

Understanding that gaming facilities are a prominent driver of tourism and economic development, casinos, ever since their establishment in Goa, have resisted decades of agitation to emerge as major revenue-earners for the government besides becoming a big part of modern Goa culture.

As a ‘package’ entertainment destination, tourism vistas in Goa have moved over from the traditional to the more sophisticated variety where spending ridiculously large amounts of money on leisurely activities re-defined the whole concept.

Goa in this respect has become an oasis of legal real-money pastimes.

With jet-setters converging in this coastal paradise, and with so much of money being thrown around, the proliferation of the more sleazy variety of operators plying their trade with brazen impunity was a natural consequence.

Although, as a sex and drugs haven, Goa has struck instantaneous fame as a ‘sin-tourism’ destination; the Goa of today does not need any elaboration from the tourism perspective as the region has already earned rave reviews as one of the hip places to be in.

It is however the preconceived notion about Goa harboured by the ‘Desi’ tourists that is giving the state authorities the headache now.

Undoubtedly, over the last few seasons, it is the domestic flock that has helped sustain tourism in Goa. From weekend revellers to those who arrive on package tours, the crowds have only been swelling with every passing year.

This ‘transition’ from international to domestic tourism may have been encouraging quantitatively, but in coping with the latter, it has always been the lack of class that has posed problems for tour-operators and the locals alike.

Goa has been attracting more of the economy class of Indian tourists for many of whom the state will forever remain a place best suited for a ‘weekend’ jaunt.

The net has been their most popular ‘tour guide’ with online searches assisting them zero down on reasonably good places to stay at and also helping procure rented bikes or cars to keep the more travel-savvy mobile.

Nevertheless, though a flourishing commercial activity in the state, the rent-a-bike/car business has come with its own share of horrors and dreads for the administration.

The sudden surge in the spate of road accidents involving tourists has however not been taken seriously by the authorities and in the absence of any serious regulatory checks being enforced by the traffic cell, it has been a virtual riot on the roads.

In this context it is pertinent to condemn the ‘Arpora incident’ that raised a scare among people when a tourist-duo indulged in a show of daredevilry for sheer amusement.

Dangerously manoeuvring a jeep through the inner roads of Arpora village, the two were seated on top of the vehicle’s open roof and negotiating the steering with their feet. Needless to say, the stunt which went viral within no time only served to scare the living daylights out of the locals.

Merrymaking by desi tourists in coastal Goa has been an issue lately, with several such instances having come to light of tourists taking liberties with the law and getting into bouts of uncontrolled frolicking.

An editorial in a local daily aptly summed up the nonsensical situation prevalent as the state’s utter failure to draw the line in terms of discipline, and went on to castigate the mute acceptance of these  violations and illegalities in the name of hospitality and tourism by the police.

Turning a Nelson’s eye to such incidents will only embolden the tourists to try out more insane ‘experiments’, far worse than the Arpora one. Of course, traffic authorities these days are known to wake up only after the severity of a road mishap generates social media backlash.

Already distressed over the drinking and driving antics of tourists, the state now has to contend with the ingenious ways of ‘public harassment’ devised by unruly visitors to the state.

Tourism is no doubt a vital economic lifeline for the state but should Goa be putting up with such crass behaviour by holidaymakers just to accentuate its credentials as a congenial host!

The sooner the administration comes to terms with such tourism fallacies, the better it is for the region.