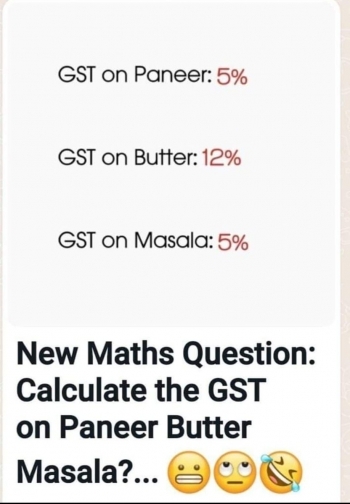 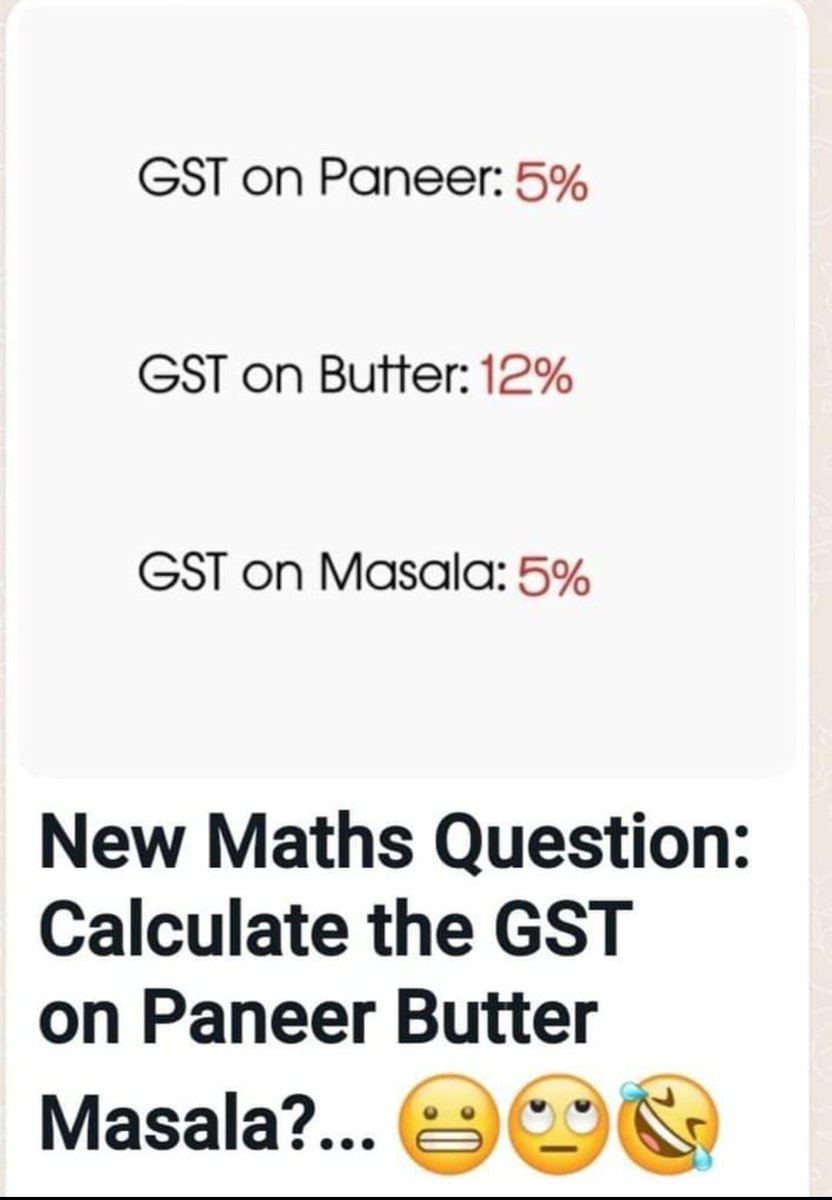 During the last one week, India Inc. witnessed a very high-voltage drama. While the contest between Draupadi Murmu and Yashwant Sinha in the presidential elections became more intense, what affected the common man was the increase in GST rates of certain products like food grains, pulses, milk products etc. Effective July 18, a GST of 5 percent was imposed on many items of daily use.

People started expressing their anger on Twitter. Some of them came up with memes. In fact, Paneer Butter Masala, a popular North Indian recipe, was found to be trending on Twitter. Taking a dig at the recent rate revisions, people were wondering whether this dish will become more expensive now.

The complexity of GST became evident when people tweeted that GST on Paneer is 5 percent, on butter it is 12 percent, and on Masala it is again 5 percent. “New Maths question: Calculate the GST on Paneer Butter Masala”. The message was retweeted even by Shashi Tharoor, one of the Congress leaders, with a comment, “Don't know who comes up with these brilliant WhatsApp forwards but this one skewers the folly of the GST as few jokes have!”

Another tweet says, “To dear @zomato and @Swiggy, I would like to inform you that I have stopped eating Paneer Butter Masala. So kindly stop sending me notification for ordering paneer. I can't afford Paneer Butter Masala now  #paneerbuttermasala #MEMES #GST #GSThike.”

Be that as it may, the rate revisions implemented after the 47th GST council meeting were not taken in good humour. People, who have been bearing the brunt of inflation, came out in the open, voicing their concerns.

However, the finance minister came up with a long thread of tweets, 14 to be precise. The tweets not only justified the move of imposing GST on these items, but also mentioned that GST is not applicable on these items, if they are sold in loose form without any label!

“Recently, the GST Council in its 47th meeting recommended to reconsider the approach for imposition of GST on specified food items like pulses, cereals, flour, etc. There have been a lot of misconceptions about this that have been spread. Here is a thread to lay out the facts. Is this the first time such food articles are being taxed? No. States were collecting significant revenue from food-grain in the pre-GST regime. Punjab alone collected more than Rs 2,000 crore on food-grain by way of purchase tax. UP collected Rs 700 crore,” she tweeted.

She explained how GST was levied on branded cereals, pulses etc. when it was introduced for the first time. Later on, it was amended to include only registered brands. Without naming any particular company, she mentioned that many manufacturers misused the provision to their advantage by not registering their brand. The government lost revenue because of rampant tax evasion.

In the end, she mentions that the “decision was a much-needed one to curb tax leakage. It was considered at various levels including by officers, the Group of Ministers (GoM), and was finally recommended by the GST Council with the complete consensus of all members.”

Also, she mentions that GST will be imposed only if these items are bought in packets of up to 25 kgs! So, if a retailer buys a bag of 30Kg, it will not attract GST! Will it not amount to tax evasion? Simply put, it will impact small shopkeepers, who do not have a huge consumer base.

It is surprising that the GoM, the fitment committee or the GST council, did not think twice about the implications of this sudden move. The new move may force people to sell many items in loose form without any labels/packaging. Now will it not affect the quality of these items? Will it not increase adulteration? The open and loose items will most likely be stored in gunny bags, inviting the rodents and other insects to take advantage.

Such items will have a high probability of contamination, especially during the rainy season. Not only this, hundreds and thousands of women are usually employed to pack these items in small packets of half to one to two Kg. These women earn some money as they are asked to clean the pulses and other cereals before they are packed and sold to the end consumer. It is unfortunate that the government’s move may throw these women out of jobs. Yes, the money they were earning may not be huge but it would have served a purpose when they had nothing in their hand.

At what cost does the government want to earn revenue? Certainly, at the cost of people at the bottom of the pyramid. Their health is being put at stake because this category of consumer will certainly buy something which is available at a cheaper rate. The pre-packed material, be it from a registered or an unregistered brand, will certainly be more expensive after levying 5 per cent GST.

Perhaps, the powers-that-be don’t know that even five rupees matter a lot for people, who work in the informal sector. The minimum wage rate in many states has barely crossed the Rs. 300 per day mark. Can such people afford to buy items in packaged forms? For instance, one kg of branded dal costs Rs 240. Will their health not get affected by consuming adulterated items like milk or pulses? Will it not increase their out-of-pocket expenses on health?

Some may say that provisions under the National Food Security Act are meant to take care of such people. Perhaps, they are not aware that not everything is made available under such schemes. Of late the quantity of wheat has also been reduced in view of the wheat crisis the country is going through because of climate issues and in the aftermath of Russia-Ukraine war. In many places, it has been completely replaced by other cereals.

Needless to say, the decision of imposing GST on essential items in the name of branding, packaging and labelling, needs to be re-looked at urgently. The finance minister must understand that the poorest of the poor have suffered badly for more than two years. They hardly had any source of income. The pandemic has taken away their savings and source of income. The last few months might have brought some respite to them as factories started employing them again for petty jobs. However, the increase in fuel prices has had a cascading effect on almost all items, be it pulses, cereals or any other essential items.

The prices of cereals, pulses, etc. have increased substantially over the last two years. In such a scenario, imposition of GST will make these products much more expensive. The common man is not in a position to bear another shock. It is a pity that the rate revision has also increased GST on stationery items like atlases, maps, printing, writing materials, drawing ink, pencil sharpeners and household items like knives, cutting blades, LED bulbs etc. On the contrary, GST on leisurely items like ropeways for transportation of goods and people has been reduced!

People from below the poverty line still struggle for Roti, Kapra aur makaan. Unfortunately, the current rate revision will hit hard and hamper their capacity to have food, without which survival is not possible.

We are left with no option but to agree with what the finance minister claims to be the “unanimous decision” of the GoM. Yet, the logic or the reason for imposing GST on essential items, household items and educational material is not clear. Hope the finance minister will listen to the logical plea of people and relook at her decision. After all, it is this common man, who voted the government to power, thinking that it will stand true to its slogan of “Sabka sath, Sabka vikas, Sabka Vishwas”.