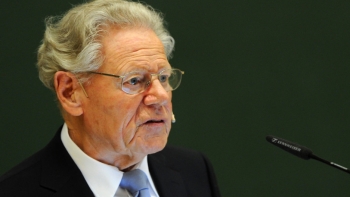 One of the most eminent and controversial Catholic theologians Professor Hans Kung (93), who passed away on April 6, had an incomparable tenure in theological circles and in world ethics. He was a versatile genius in theology.

As a young man, he did his doctorate in theological studies in Gregorian University, Rome. Ever since he was professor of theology in Tubingen University, Switzerland. After a couple of years of joining the university, he was made the head of the department and subsequently placed in the most eminent position in the university.

We see the young theologian with flowing red hair, rugged looks, fighting spirit, full of life and energy, with brilliant intuition, higher intellectual capabilities in the Council of Vatican II. He expressed bitterness about the injustices and the dullness manifested by the institutional Church. He spoke of Church as communion as opposed to Church as a perfect society. He fought for the Church of the laity, inter-religious dialogue, and ecumenism.

In Joseph Ratzinger (Pope Benedict XVl) he found a friend and rival. Though they used to dine together every Thursdays, their meeting was more to confront each other. According to Kung, Benedict XVl reversed the Vatican II Church to the Middle Age. Hence for Kung, Benedict is a Middle Age theologian.

Owing to his questioning of infallibility, which he saw as the core problem in ecumenism, he lost his chair in Catholic universities.  He did not leave the priesthood, and he found/created another far wider horizon of inter-religious dialogue, global ethics, and the vast arena of working for world development. He had controversies. He questioned why Vatican was silent on China and Hong Kong, but supported Myanmar. May be due the policy of “to be weak with the strong, and strong with the weak”!

He remained a faithful Catholic priest all through. He started working for a Global Ethic Foundation with its headquarters in Tubingen, serving for peace, justice, and integrity of creation. Kung was very much committed to Christianity as a religion of revelation, and he praised that Christians all over the world reduce the suffering in the world. Christ is a victor over death and destruction. Kung was critical of Buddhism for focussing on suffering and the negative things of life.

“For many Christians,” Küng’s biographer, the British journalist Robert Nowell, wrote, “perhaps especially for those not in communion with Rome, there was always something too good to be true about Hans Küng. He combined the very qualities that many of the Catholic Church’s detractors have regarded as totally incompatible: a passion for truth and loyalty to Rome, an open-minded willingness to accept the fruits of critical inquiry.”

Born in the town of Sursee, north-west of Lucerne in Switzerland, Hans was the oldest of seven children, two of whom were boys. He was named after his father, a shoe merchant; his mother, Emma (nee Gut), was a farmer’s daughter. At the age of 11, he felt he was called to the priesthood, he recalled in My Struggle for Freedom, a 2002 memoir. He was ordained in 1954 in Saint Peter’s; he did further academic work before spending 18 months in parish work in Lucerne.

Some of the inspiring quotes from Hans Kung:

“In the last resort, a love of God without love of humanity is no love at all.”

“The Gospel has to be the norm.”

“I like catholicity in time; our tradition is 2000 years old.”

“That is the Roman way: to give favours to the favourites.”