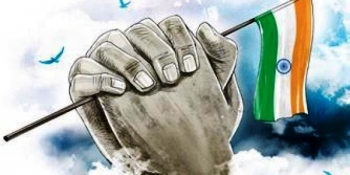 As part of Azadi Ka Amrit Mahotsav, Prime Minister Narendra Modi has appealed to the people to strengthen the ‘Har Ghar Tiranga’ movement by hoisting or displaying the national flag in their homes between August 13 and14. “Today, we recall the monumental courage and efforts of all those who dreamt of a flag for free India when we were fighting colonial rule. We reiterate our commitment to fulfil their vision and build the India of their dreams,” he said.

This is not the first time that the PM resorts to this kind of symbolic act. In order to face the situation of pandemic Covid 19, the PM asked people to come out with lamps, torches, candles or even use mobile phone's flashlights for 9 minutes at 9 pm on April 5, 2020 as a mark of ‘our fight against Covid-19’. Prior to that, the PM had asked people to show up on their balconies and gates to applaud unsung warriors against coronavirus during the 'Janata Curfew' on Sunday, March 20, 2020. These two symbolic actions were not followed by real actions on the part of the government when the second wave of coronavirus hit the people of India very badly. The frightening pictures of hundreds of bodies floating in the Ganga exposed the failure of the government to translate symbolism into reality.

As reported in the media, Shivraj Singh Chouhan, the Chief Minister of Madhya Pradesh, said that tricolour would be hoisted on more than 1.5 core houses in the state. The million-dollar question is whether this spectacle will in any way contribute to strengthening the values symbolized by the tricolour, when the spirit of the Indian Constitution is recklessly being trampled upon by targeting the minorities and weaking the democratic institutions.

Many critics of the BJP have pointed out the hypocrisy of the saffron party for its intense love for the tricolour. Former Karnataka Minister K S Eshwarappa made a statement on 30th May 2022 that Bhgwa Dwaj will become the national flag in the future. “We place it before us in the Rastriya Swayam Sevak Sangh and pray daily to promote the concept of reunification. I have no doubt that it will become our national flag one day,” he said. None of the BJP leaders, including Prime Minister Narendra Modi, did utter a word against the statement of Eshwarappa. If the BJP holds the tricolour in high esteem the party should have immediately condemned the statement of Eshwarappa and warned him of making such ‘anti-national’ statements.

History is a witness to the aversion of the RSS, the parent organization of the ruling party and of the PM, towards the national flag. On the eve of Independence, when the nation was preparing to celebrate freedom, RSS's mouthpiece Organiser had declared that the tricolour will "never be respected and owned by the Hindus. The word three is in itself an evil, and a flag having three colours will certainly produce a very bad psychological effect and is injurious to a country." The second sarsanghchalak of RSS, M S Golwalkar, in his book, Bunch of Thoughts, has expressed his dislike towards the tricolour. “Our leaders have set up a new flag for the country. Why did they do so? It is just a case of drifting and imitating... Ours is an ancient and great nation with a glorious past. Then, had we no flag of our own? Had we no national emblem at all these thousands of years? Undoubtedly, we had. Then why this utter void, this utter vacuum in our minds?"

What does the national flag symbolize? Dr. Sarvepalli Radhakrishnan, former President of India, has given a relevant explanation of the national flag and its symbolism. “Bhagwa or the Saffron denotes renunciation or disinterestedness. Our leaders must be indifferent to material gains and dedicate themselves to their work. The white in the centre is light, the path of truth to guide our conduct. The green shows our relation to (the) soil, our relation to the plant life here, on which all other life depends. The "Ashoka Chakra" in the centre of the white is the wheel of the law of dharma. Truth or Satya, dharma or virtue ought to be the controlling principle of those who work under this flag. Again, the wheel denotes motion. There is death in stagnation. There is life in movement. India should no more resist change, it must move and go forward. The wheel represents the dynamism of a peaceful change”.

According to some political analysts, a significant underlying symbolism of the three colours is based on the secular principles of Indian Constitution. “The saffron represents Hinduism, Buddhism and Jainism, the white is for Christianity and the green stands for Islam. The flag as a whole represents a confluence of all religious principles, but above all a philosophy of pluralism and righteousness as depicted by the Ashok Chakra in the middle”.

According to the PM, the purpose of the Har Ghar Tiranga movement is to reiterate the commitment of the people to fulfil the vision of freedom fighters and build an India of their dreams. The vision and dream of the freedom fighters are unambiguously outlined in the Constitution of India, especially the preamble. The core constitutional values as mentioned in the preamble are Secular, Democracy, Justice, Equality, Liberty and Fraternity that assures the Dignity of the individual and the Unity and integrity of the nation. Are these values being protected and promoted under the aegis of the BJP government?

Ever since the BJP government came to power under the leadership of Narendra Modi in 2014, India has been witnessing a serious erosion in the practice of the constitutional values and principles. Prominent among them are dharma or rule of law and pluralism/secularism. The Ashok Chakra in the middle of the flag symbolizes these two core values. The dharmachakra with 24 spokes symbolizes the incredible diversity of India.

The government in a democracy is expected to be impartial and even-handed in implementing the laws. Rule of law or equality before law is the foundation of democracy. It appears that today two sets of laws are operative in India -- one for those who are with the BJP government and its allies and the other for the opposition parties and those who are critical of the government. The BJP governments at the Centre and in the states have been blatantly partial in the application of laws. Examples are plenty. The central agencies like CBI and ED are haunting leaders of the opposition parties and putting them in jail without bail. Anil Deshmukh and Nawab Malik of Maharashtra are only two examples. Nobody claims that they are innocent, but the question is why the Central agencies are not finding any corruption cases against those who are in BJP and its supporters. Are they all saints? Why is no action being taken against those who joined the BJP after deserting their former parties? A good number of them were under the scanner of the central agencies before switching sides.

The bias of the government agencies was evident in the BJP leader Nupur Sharma’s case. Despite her statements having dangerous and violent consequences, she was not arrested. On the contrary, Mohammad Zubair was arrested on frivolous charges in seven cases. The Supreme Court had to intervene and say that he was subjected to a “vicious cycle of criminal process”. But the central agencies who are totally under the control of the BJP government continue their highly biased approach in different corruption cases. Against this backdrop one is compelled to ask “How is dharma symbolized by the Ashok Chakra in the middle of our national flag being practiced?”

Secularism or pluralism, the heritage of India for millennia, has been the biggest casualty ever since the BJP came to power. The process of dismantling the secular fabric, initiated during the BJP regime under the moderate Atal Bihari Vajpayee, was intensified during the second innings of the Modi regime. Hate speech and violence against Muslims have become common since 2014. The passing of the controversial Citizenship Amendment Act (CAA) and the brutal suppression of protests against the anti-constitutional law is a proof of the blatant discrimination against Muslims by the government of a secular state which should not favour or disfavour any particular religion. No serious action was taken against the leaders of Dharamsansad who had given an open call for genocide of Muslims.

According to the information furnished by a Delhi-based socio-cultural organization, Act Now for Harmony and Democracy (ANHAD), in a book titled ‘Hate Grips the Nation’, from 2014 to 2022, around 878 cases of hate speech (54%) and hate crimes (46%) have occurred in India.

Different states have increasingly passed laws restricting Muslims’ religious freedom, including anti-conversion laws, bans on praying in public places and on wearing headscarves in schools. The BJP governments have turned to extrajudicial means to punish Muslims, through a practice called, “bulldozer justice” invented by UP CM Yogi Adityanath and replicated by other BJP chief ministers. Recently the Karnataka chief minister Basvaraj Bommai said that his government would not shy away from adopting Yogi Adityanath’s model to take tough action against ‘anti-national and communal elements’.

Let the Har Ghar Thiranka movement be an occasion for the BJP and the Sangh Parivar leaders, including the Prime Minister, to introspect how they are practising the core values and principles symbolized by the tricolour. It is an occasion for the opposition leaders and people to reflect whether they are ready for a struggle to safeguard the core values of the Constitution and pay the price for protecting secular democracy that is being replaced by a majoritarian theocracy.