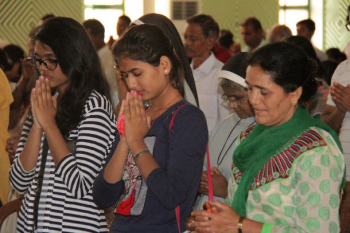 On 28 November, perhaps, the country may learn why exactly conversions out of Hinduism pose a threat to national security.

Ghar Wapsi, the polite name for conversions to Hinduism, is kept out of the purview of the law in most of the existing Freedom of Religion Acts, as the anti-conversion laws are known in the statute books, that are extant in a dozen or so states in the country.

The various wings of the Rashtriya Swayam Sewak Sangh, particularly the Bajrang Dal and the Akhil Bhartiya Vanvasi Kalyan Ashram, have long been actively using all the muscle they can muster and the political power increasingly at their command to pressure new Christians, or those living in a vulnerable isolation, to renounce their faith and come back to the bosom of the clan.

Pressure tactics vary from crude assault to the occasional murder, to the more persuasive denial of water from the village well, rations from the local shop, and paid work. No complaints with the police are registered, unless on occasions when Christians’ corpses are refused a burial, or as in the central provinces, even dug out of its grave.

Such cases are well documented by local civil society, and by apex Christian organizations. But they are not the subject matter of the case before the Supreme Court Bench of Justices H.R. Shah and Hima Kohli who are to give their considered judgement on 28 November on a petition moved by the redoubtable Advocate Ashwini Kumar Upadhyaya urging stringent steps to control fraudulent religious conversion by “intimidation, threatening, deceivingly luring through gifts and monetary benefits.”

Mr Kumar is well-known in the court for similar, though not identical, cases he pursues in court. He is persuasive.

"It is a very serious issue which affects security of the nation and freedom of religion and conscience. Therefore, it is better that Union of India may make their stand clear and file counter on what further steps can be taken to curb such forced conversion," the court continued.

The Supreme Court Bench has sent notices to the Central government for its response. Similar notices have gone to several state governments, as well as central organisations like the National Minority Commission.

Mr Upadhyaya’s writ has not exactly been challenged by the leadership or representative originations of any religion, including the Muslims, who have faced the brunt of the specially weaponised anti-conversions laws in Karnataka, Madhya Pradesh and Uttar Pradesh.

The Christian community which faces violence, intimidation and government wrath – collectively called by it as “persecution’ -- too has not responded so far to the writ, though they well may be aware of it.

At the moment of this writing, it is not known whether the Catholic Bishops’ Conference of India, the National Council of Churches in India and the Evangelical Fellowship of India, have moved the court in any intervening applications. These are the three major organisations, other than representatives of educational institutions and hospitals that are usually in court challenging any infringement of their Constitutional rights.

It is not clear if the government, various state administrations, and the two major religious minorities, will want to challenge the writ and argue before the court on both points of law, and the utter lack of data in the writ, and in the petition itself.

State governments will certainly be able to use their intelligence agencies to find out how many cases of forcible conversions, if any, have taken place in their jurisdiction.

Religious conversion by force or fraud which are already outlawed in many big states, must be stopped. No state government, in its objects of enacting anti-conversion laws, made public any data on conversions as such, much less conversions tainted by force and by fraud.

Much of their hesitation to commit themselves to numbers is because everyone has his own definition of “force”, “allurement” and “fraud.” For the RSS and some governments, the statement attributed in the Bible to Jesus that “no one goes to the Father other than through me” is both intimidation and fraud. Others hold education and Medicare to the poor as allurement.  So is social work among the poor.

The matter of “force” or violence or even a threat to violence is a little less opaque. Violence is well defined in the Indian Penal Code, and the Criminal Procedure Code well defines state responses.

It is because of this documentation demand for clarity when there are overlying issues – in this case religion and violence -- that the National Crime Records Bureau hesitates to record communal violence, or in fact any violence, in terms of the religion of the victim and the aggressor.

Governments, in fact, fight very shy of firstly documenting communal violence, or hate-inciting violence, and  publicly releasing desegregated data. Even in such a simple thing as religion data in the national census, the government takes years before it releases state or district-level data. It almost never releases block or village level religious data using the argument that it is sensitive and impacts national security.

In fact, the only time the government of the day shows any alacrity in releasing religious data is when it can use it politically for its own electoral good, like when the Hindu population dipped marginally below 80 per cent. The population was 138.77 crores in 2021, or 78.3% according to data available from various sources on the internet. The Census Commissioner does not confirm this data.

The nation felt the noise made in the census year 2011 when the religion percentage was made public. It was 79.8% and as headlined by every media in the country as a threat to Hinduism. The BJP and the RSS and their vast force-multipliers said Hinduism and Hindus were in danger in India and their identity would be swamped by Muslims whose population increase was larger though the rate of growth had significantly declined and was closer to the national average than at any point after Independence.

The BJP, specially under Mr. Narendra Modi, has used the Hindi Khatre mein hei (The Hindu, or Hinduism, is in danger) as a very successful political slogan, especially after the campaign of 2014 which propelled Mr Modi to the leadership of the country.

The judiciary is seemingly willing to buy this slogan, especially in various High Courts and in the district courts where matters of bail of pastors and others come up, and the magistrates and judges almost routinely refuse bail even when the abuse of power by the police is blatant and visible.

In fact, it is an interesting question to pose: “Can clergy, especially Christian pastors, use force to convert anyone?” Common sense answers in a landscape dominated by Hindus will make it clear to the meanest intelligence that it is not possible.

Force was used by the late BJP leader Judeo in Chhattisgarh “reconversions” or Ghar Wapsi. Sangh groups do it with the full support of the government and its police.

But punishing Muslim youth for marrying Hindu women and beating the hell out of pastors at prayer in house-churches show zero commitment to freedom of religion.

Let it not be said the only freedom people have is to join the Hindutva practiced, professed, propagated, and preached by the Sangh Parivar, including various important members of the Cabinet of the Prime Minister.