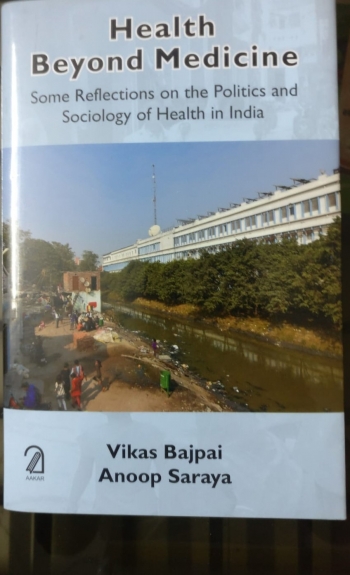 India’s health service is one of the most privatized and iniquitous in the world with public spending on health being one of the lowest. And in our over enthusiasm for nationalism, we have completely forgotten the health care sector which requires urgent attention.

Under the circumstances, “Health Beyond Medicine”, a study jointly done by Dr. Vikas  Bajpai and Dr. Anoop Saraya, is an extremely helpful one in India’s efforts to reach out to the poor in both the urban and rural areas.  It looks at India’s healthcare policies and practices and assesses the consequences for the development of a healthcare framework for the country.

The book begins with an analysis of the Bhore committee report of 1946 which formed the basis for the development of the healthcare system in the country. The report categorically stated that in a democratic country witnessing revolution of rising expectations, the responsibility for providing healthcare to the people must be that of the State.

Unfortunately, the Bhore Committee pushed for a ‘welfare approach’ to healthcare rather than advocating a right’s approach for securing health for the millions, the majority of whom were poor and led life in pitiable conditions. However, public healthcare expenditure has remained very low; less than one percent of the GDP is spent on public health care services in India.

There is a huge gap in the healthcare facilities between the urban and rural areas and most of the population (68.84 per cent) live in rural areas. Majority of the hospitals are privately owned and are located in cities and are not accessible even to the urban poor.

What is ironical is that most private healthcare facilities in the country, both in urban and rural areas, have been built on the strength of various government subsidies and are of little or no service to the poor. Private hospitals in the country offer medical care at highly unreasonable prices and invariably indulge in unethical practices like recommending highly dangerous as well as totally unnecessary medical and surgical procedures. Because of this one wonders whether the poor are better off without their services!

That apart we need to urgently fix our public healthcare system. It has to, according to Vikas and Anoop, start with demystifying medical education. In this context the authors argue the present system of selection of people for medical education must end. The system of medical entrance examination with its emphasis on memorizing more and more obscure facts to answer multiple choice questions should be done away with. Instead a system has to be developed that will test the basic intelligence of the people, their aptitude to serve the people, especially the underprivileged. Such reforms in medical education would automatically discourage people who look at medical care simply as a lucrative career.

In the chapter on ‘Landmarks in the development of Healthcare services in India’, the study points out that the Bhore Committee (1946) committed the State as the chief guarantor of the health of its people. The Committee epitomized an epidemiological approach to the development of health services in conformity with the principles of social justice, equitable access, community participation, integration of preventive, promotive and curative services primary to the needs of the rural people. There was also a short term plan and a long term plan for developing the health infrastructure.

Soon after the Bhore Committee report, the sub-committee on health of the Planning Committee of the Indian National Congress (Sokhey Committee 1948) gave its recommendations. In addition to endorsing the main thrust of the Bhore Committee, it stressed the need to integrate the indigenous systems of medicine within the mainstream to achieve self-sufficiency in healthcare.

With respect to health, the Five Year Plans have been high on rhetoric but did little on the ground. In the First Plan, only 5.9 percent of the plan outlay was committed for health against a minimum of 15 per cent recommended by the Bhore Committee. For the Second and Third Five Year Plans, the outlay for health was 5 per cent and 4.25 per cent respectively.

In this context the study refers to the National Health Policy 2017 which resolved to raise the public expenditure on health up to 2.5 percent of the of GDP in order to “improve health status through concerted policy action in all sectors and expand preventive, promotive, curative palliative and rehabilitative services.

Earlier, the UPA government had, while rolling out the National Rural Health Mission (NRHM) from 2005 to 2011, declared to raise public expenditure on health to 3 per cent of the GDP. However, the Modi government began its innings by slashing the health budget by 20 per cent in 2014.

Today where India stands in various healthcare indicators in the world is clearly brought out in a study published in The Lancet in May 2017. According to the study, Somalia, to which Prime Minister Modi famously compared Kerala’s health care, had surpassed India in ensuring the survival of its newborns.

A recent study by senior doctors of the National Health Service, U.K. concluded that people would be better off without 80 percent of the medical interventions. With hospitals contributing to the spread of infections and irrational use of medicines causing more and more complications, these subjects deserve study and discussion.