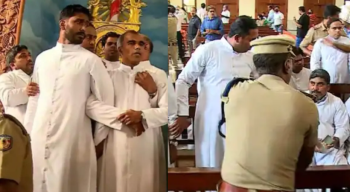 Holy Things to the Holy

The unexpected turnout of events and commotions happened in St Mary’s Basilica in Ernakulam, Kerala during this Christmas season has severely wounded the sentiments of the Catholic faithful across the globe as much as the Basilica parish members. It’s almost habitual for us now to hear about the attacks on Christian religious functions by the fundamentalist groups during the festive seasons, but an attack on the most Holy Eucharistic Celebration by its own priests and faithful is unheard of in the history of Kerala.

Jesus was Handed Over

“On the night Jesus was handed over...” is the prelude to the words of institution, one of the most important moments in the Eucharistic celebration, which is the commemoration of the Last Supper of Jesus Christ. When these words are recited at each Qurbana (Holy Mass) we are not only setting a historical context for the Qurbana, but also are proclaiming the mysteries of deep theological significance. What does “handed over” mean, and who did hand Jesus over? are questions we should delve upon.

Anyone who knows the story of Jesus would certainly answer that it was Judas, one of his own apostles who ‘betrayed’ Jesus. 'Paradidomi,' the Greek equivalent for betrayal, literally means 'to hand (someone) over'. In the translation of the Holy Mass the phrase “handed over” is used instead of the word ‘betrayal’ signifying that Qurbana is the commemoration of this ‘handing over’. The ex

Paul on Ethics of Eucharist

Paul reminds them of the relevance of the commemoration of the Lord's Last Supper when he sees the Corinthian community engaging in tendencies that are not compatible with the essence of Holy Eucharist. Far from being an ideal community that should naturally share in love and respect for each other (1 Cor. 11: 23-26), they increasingly grew self-centred and fostered selfish interests. Not being polite at the table (v. 17), following social vices and sectarianism (v. 18), going to Mass just for food and drinks (v. 22) were some abominable tendencies of the Corinthians around the table of the Lord. It is to be specially noted that this is the only place where St Paul who is the author of 14 epistles makes a mention of Last Supper!

A Betrayal of the Sacred

The saddest thing today is that we literally celebrate this handing over of Jesus to be abused, stripped and to be sacrificed again and again. The heinous events that happened in the holy of holies of St Mary’s Basilica at Eranakulam on the eve of Christmas is as condemnable as anything.

The extremely odious blasphemy staged by the priests and faithful goons in Basilica for two days preceding Christmas has crossed all boundaries of our faith and spirituality. They have caused irreparable injuries -- spiritual, religious and social. A shade of suspicion overshadows the hierarchy to consider that this blasphemy as premeditated, wilful and deliberate as we perceive a deafening silence and indifference from the authorities. Instead, the Church leadership and their aids took courage to engage in a blame game than being sorry for desecrating the consecrated body of Christ, the holy vessels and vestments and the most venerable altar of Christ which is the symbol of the sepulchre of Christ. Those who have incited and perpetrated the tampering of the holy show little remorse, prompting us to think they neither fear God nor hope for Heaven. And the proverb comes true in the highest headquarters of the Syro-Malabar Church that “fools rush in where angels fear to tread.”

Had this crime been committed by a non-Catholic person or group on a platform where Holy Qurbana was celebrated, how much hue and cry would have surfaced! Would there be such indifference on the part of the church leadership, priests and believers? Imagine the many numbers of prayer protests and rallies organised, and press statements released minute-by- minute. We are too good at making as much decoration for a Eucharistic procession as well as experts in making a ‘show’ if a Holy host accidentally falls down while it being distributed to the faithful at the end of the Qurbana. The priests and the servers would devoutly pick it back.

Silence of the Hierarchy

What is more shocking and devastating is the chilling responses from the hierarchy in the wake of these unexpected turn of events. In spite of the negligent and blasphemous handling of sacred objects and places, neither the head of the church nor any bishops or the priests have issued a statement. (Many hours after the incident, the PRO of the Church has issued a routine statement). Instead, the hierarchy and their promoters have started a blame game rather than making an enquiry on the attack, and identifying the perpetrators. This is enough to suspect that the hierarchy was aware that such things would happen. The faith community feels that the bishops are enjoying the euphoria of the rebellious act.

Most social media feeds accused the priests from Eranakulam who started celebrating the Qurbana one after another which caused the attacks. It remains a big question that why the hierarchy did not seek a canonical procedure on the errant rather than precipitating a physical attack on them and desecrating the Holy place and things. The second big question is that why were the attackers who toppled the Altar and the vessels and the Cross on it are not yet identified and filed an FIR against them in the police station concerned? What canonical notice is given to them, and what procedure would be administered on them?

For two reasons I think the hierarchy should have made an apology to the devout faithful. Primarily because St Mary’s Basilica is not merely the headquarters of Ernakulam-Angamali archdiocese, but it is the seat of the Major archbishop, hence representative church of the whole Syro-Malabar Church. Secondly, the videos of the attacks went viral no sooner than the assault arose all over the world through social media, and faithful across the globe got hurt and saddened by watching their most adorable holy Eucharist being thrashed by the thugs. Why the hierarchy does not feel that they have a pastoral obligation to the people to console them in this most upsetting times?

Least Regard for the Sacred

Most bishops of the Synod are teachers who taught us the lessons of holiness, love and kindness. Some bishops are either our own classmates or colleagues who worked together before they were ordained bishops. Their advices on co-operation, forgiveness and above all celebration of the Qurbana in the most solemn manner have edified the faithful. They who have been judging and assessing the holiness of the priestly candidates and stipulating the standard of holiness for the people, now when the holiest things are desecrated under their nose, they have absolutely nothing to say!

Dear bishops, were the homilies you have delivered during the occasions of church consecration, and numerous ordinations fake and pretentious? None other than you have the responsibility to push things to this far handing the Holy Qurbana over to be defiled. Though you have bemoaned hundred times about the Black Masses being offered by the Satanists, you have now created an opportunity for an even greater Black Mass by your own select Satanists. Your hands are much stained making you unworthy to approach an Altar or celebrate divine mysteries anymore. The innocent blood of Christ is crying out for justice. The blood on your hands is not that of Christ’s cleansing and redeeming blood.

An Appeal to Priests and Faithful

The worst has happened, and you are all aware of it. Dear bishops and priests of all three rites, this is not simply an issue of a diocese in Kerala, but a universal issue of desecration. Are you not part of the body of Christ that’s been brutally thrashed and abused? Is it enough to simply be complacent with your regular cliché ex

Starting from Judas we came across various people who handed Jesus over to be killed. The last in the link was the modern-day hierarchy and priests who have no remorse they handed Jesus over to be abused. Finding an answer to who really handed Jesus over and for what, would be a great spiritual relief for all of us. Do you remember Jesus' last cry on the cross? My God, my God, why have you forsaken me? It is God the Father who really handed Jesus over (forsaken), just like Abraham who climbed mount Morea to kill his son Isaac. Isaiah 53:6 says, "The Lord handed him over (to death) for the iniquity of us all" and 53:12 reads, "He bore the sins of many, and was delivered up (handed over) because of their iniquities." Human salvation by Christ was not possible without him being handed over by God! In other words, our salvation from sins can only be achieved by the wilful handing over of Christ by his Father.

I console myself through the eyes of faith that this blasphemy and desecration must have been an unavoidable necessity. Today, December 25, 2022, God the Father once again handed His Son Jesus over to death to make a reparation for all the injustices, indifferences and immoralities of the church, including that of mine. Nonetheless this day would be marked as the second Good Friday of the Syro-Malabar Church.