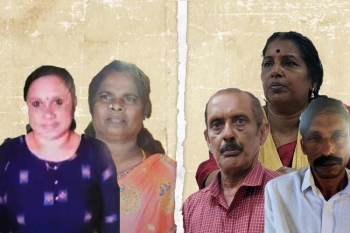 Last fortnight, Kerala woke up to media reports of how two women were sacrificed, sexually mutilated and their body parts eaten by a couple on the directions of their accomplice that it would help them gain wealth and longevity. The two women were brutally murdered in the first week of June and last week of September this year.

Information available about the case according to various reports goes on like an action thriller. Both the victims – Rosli Varghese (50) and Padmam (52) – who earned their living selling lottery tickets in different parts of Ernakulam disappear mysteriously this June and September respectively. Padmam’s son lodges a police complaint after he fails to establish contact with his mother since September 26.

Police investigations based on the CCTV footage/call records found that a man had taken Padmam to Thiruvalla from Kochi in a vehicle. The trail further led them to Elanthoor village and stopped at the house of Bhagaval Singh (68), a poet as well as practitioner of traditional medicine (assisted by his wife Laila (59).

Despite being a Class 6 dropout, Shafi (52), a former truck driver and mortuary worker who had brought Padmam to Bhagaval Singh is believed to have mastered the art of social engineering as well as handling social media. Shafi is said to have created a fake Facebook ID in the name of a woman, urging people to get in touch if they required a puja (ritual) to be performed for wealth and prosperity. Bhagaval Singh and his wife Laila contacted him after seeing the post and Shafi met and convinced them that human sacrifice was the only solution to their many problems and sought money from the couple. He then lured Rosli to the couple's house and murdered her. Shafi approached the couple again and coerced them for another sacrifice after which he managed to entice Padmam who too was murdered. The two women's throats were slit and their body parts cut into pieces before it was buried in two different locations in Thiruvalla.

The Special Investigation Team (SIT) constituted to probe into the case which has been able to secure the custody of Shafi as well as the Bhagaval couple for 12 days has been able to recover Rosli’s bag and her mobile phone. The trio are accused of cannibalism after the remains were exhumed from the premises of the Bhagaval’s house on October 11.

On the other side, the three accused have reportedly moved the Kerala High Court challenging the order of the Ernakulam Judicial First-Class Magistrate Court VIII granting their police custody as improper. That the investigators forced them to give self-incriminating statements, the petition argues that the three accused are from reputed families. In the event of such a long period of custody being granted to the police, there is every possibility that they would be ill-treated and tortured physically and mentally by the investigating agency.

The Elanthoor case has similarities to the infamous Nithari murders that was reported in 2005 where several children had gone missing over 2 years in Noida. The sensational killings came to light after the police found human remains in a drain. The prime accused Surendra Koli allegedly lured young girls inside the house, killed them and thereafter ate up their body parts after cooking them. The owner of the house Moninder Singh Pandher did nothing to prevent the brutal killings. Notably 15 skulls and bones were recovered in the drain in front of the said house. A total of 19 cases were registered in connection with the Nithari killings. Of them, chargesheets were filed against Koli in 16 cases. He was convicted in 13 of them and acquitted in three for lack of evidence. Of the six cases against him, Pandher was convicted in three. The trial court awarded death penalty to Koli and 7 years imprisonment to Pandher, under sections of the Immoral Traffic (Prevention) Act. However, Koli moved a Special Leave Petition before the Supreme Court which was dismissed in 2011. The Apex Court observed, “The killings by the appellant Surendra Koli are horrifying and barbaric. He used a definite methodology in committing these murders. He would see small girls passing by the house, and taking advantage of their weakness lure them inside the house…there he would strangulate them and after killing them he tried to have sex with the body and would then cut off their body parts and eat them. Some parts of the body were disposed off by throwing them in the passage gallery and drain (nala) beside the house which had become a virtual slaughter house, where innocent children were regularly butchered...This case clearly falls within the category of rarest of rare case and no mercy can be shown to the appellant Surendra Koli”.

Well, be it as it may. While the SIT is expected to unravel the mysterious Elanthoor deaths, the cause for concern is why such an incident is happening in Kerala which is the most literate state in the country. Not long ago, ‘Nari Shakti Puraskar’ winners 106-year-old Bhageerathi Amma from Kollam and 98-year-old Karthyayani Amma from Alappuzha were in news for having taken up online mode of instruction towards clearing the Class X equivalency exam. While Bhageerathi Amma, who cleared the Class IV equivalency exam of the Kerala State Literacy Mission Authority made news as the oldest equivalency course student, Karthyayani Amma also hit headlines after she cleared the same exam by scoring 98 out of 100 and emerging as the State topper. Well, at the society and household level, as a first step a change in mindsets to treat girls as equal partners amongst male children merits consideration.

The Kerala High Court is to hear an appeal filed by the Kerala Yukthivadi Sangham seeking a directive to the State Government to take a decision on the recommendation of the State Law Reforms Commission for the enactment of the Kerala Eradications of Inhuman Evil Practices, Sorcery, and Black Magic Bill.

Hopefully, this would help eradicate the menace of human sacrifices.