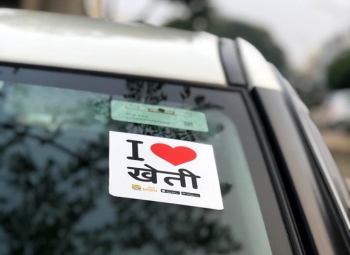 I DO SUPPORT FARMERS; BUT NOT AS A FAD!

May sound cynical but I don’t support farmers the way everybody seems to be supporting them these days.

Almost every other vehicle, from tiny Maruti 800s to jumbo luxury SUVs, displaying huge sized flags and stickers, which garishly announce support for farmers, can be seen running on the city roads rather frequently.

I doubt if such a trendy and short lived acts would bring any change either in the lives of the troubled farmers, who have been agitating continuously now for more than four months, or in the haughty attitude of the government towards the farmers’ seemingly rightful demands.

I see this kind of farmer supporting symbolism similar to hundreds of meaningless and never followed in their letter and spirit slogans which almost every public goods carrier displays rather loudly! The most popular among them are paradoxical phrases like DON’T MIX DRINKING AND DRIVING, AVOID AIDS and BETI PARRAHO - BETI BACHHAO; the last one sounds most obnoxious because we, a religious majority, boast of having Ma Sarasvati, a woman, as our Goddess of learning!

On the contrary some rustic verses which are also painted on many of these vehicles, apart from apparently mandatory markings like OK-TATA, BURI NAZAR WALE KA MOOH KALA and HORN PLEASE, do make entertaining reads more than often!

That is why I often wonder who would support Aman, and his many other unfortunate likes, who really require public support perhaps more than the hapless farmers. Not so strangely no one ever speaks for them even through faddish symbolism, like that of holding ‘mombatti-marches’ or displaying meaningless slogans!

In his late twenties, lanky Aman’s ignorantly peaceful looking face truly matches his name. He daily collects garbage from each of the sixty odd flats in our multi storied housing society, if not smilingly, but with no sign of grim or revulsion ever on his face. Also, he is supposed to keep the large society area clean of dirt and tree leaves.

Carrying heavy pair of bins, one for collecting dry and other for wet kitchen waste, his job makes him climb up and down about 500 stairs every day, with no or rare weekly off.

Despite official instructions most of the households don’t segregate wet and dry garbage as yet, which he himself has to do with unprotected naked hands. And lo! These are Corona endemic days, when everyone preaches/sloganizes about keeping hygiene as a priority to fight the virus!

Plus, he listens patiently, daily as a routine, many complaints followed by threats to stop paying his dues, from one or the other resident for leaving this or that part of the society unclean.

He does this highly unhygienic and thankless job for earning a sum of Rupees 300 or so a day. And only god knows how many family members are destined to live on his this princely income in this city, which is known to be one of the costliest cities in the country.

Let us start supporting all such workers and interact with them with some dignity and respect they deserve rightfully. The very first initiative, to start with, perhaps be to remember that these more than front-line workers, even eons before the ongoing pandemic, have their names also, other than with which we often address them rather contemptuously!

(The writer is a former principal of Chandigarh's first government college)