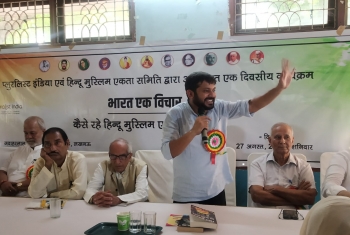 Every Indian has his or her own idea of India. Pseudo-nationalists would have us believe that India is now an ideal country. Never mind that 4,00,000 citizens left the country last year seeking greener pastures and greenbacks elsewhere.

The “Idea of India’ was the theme of a seminar organized on Saturday 27th August at the Nehru Yuva Kendra, Lucknow. It was the brainchild of Magsaysay awardee and social activist Dr Sandeep Pande. There were 200 participants from across the Hindi heartland. It was compered by Sri Anand Vardhan Singh, senior journalist, who runs a popular news channel “The Third Eye”.

Ray made an in-depth analysis of how modern India came to be. It was based on his booklet “”My Idea of India” that was distributed to all the participants. India had a glorious history of its freedom struggle. It was important to know this history to counter the canards that are being spread today in the name of “Hindi, Hindu. Hindustan”.

How can we call India an ideal society or democracy? “Freedom House”, an American institution, describes us as “partially free”, while the V-Dem Institute of Sweden has described the country as an “elected autocracy”, he opined.

Tracing our history he said that even before 1857 there were several other revolts across the country. They were ex

Long before management gurus had invented the SWOT analysis, Mahatma Gandhi converted India’s weaknesses into its strengths. We were a poor country with widespread hunger, so he resorted to hunger strikes. We could not face the military might of the British, so he opted for non-violence.

Today’s communal divide goes back to 1909 when the British rulers established separate electorates for Hindus and Muslims. At that time neither Gandhi, nor Nehru, were on the scene. It was Maulana Azad who opposed this divide.

We need to respect pluralism and go beyond mere tolerance to acceptance of the other, as advocated by Swami Vivekanand. Even sub-national aspirations in various States, seeking to promote their language and culture was, not parochial. It was part of India’s plurality, he said. Jawaharlal Nehru had very wisely said that India was not a melting pot where individual identities were lost, but it was like a salad bowl where each element retained its uniqueness with the total being greater than the sum of its parts. It was Nehru who had coined the phrase “Unity in Diversity”.

Going back in history, Ray said that even the word Hindu is derived from foreign languages like Persian and Greek, then used to describe those living beyond the Indus River. The country’s oldest text, the Rig Veda, does not refer to any country or geographical region. In 500 BC the Magadh King Bimbisara used the term “Sorosha Mahajanpadas” (meaning 16 provinces) to describe the land.

The Manusmriti referred to the territory as Aryavarta. During the reign of Emperor Ashoka it was known as Jambudwip, as found on various inscriptions. It was only in the first century BC that the Kalinga King Khararela began to use the word “Bharat” to describe the sub-continent, said Ray. This was a geographical region, a country, but far from being a nation.

Since there was no sense of nationhood, the British could easily rule the country. During the 1857 War of Independence, the East India Company had 3,00,000 troops, of whom just 26,000 were white skins. The remaining 2,74,000 were Indians who saw no wrong in suppressing their fellow countrymen. Ray said that it was on the basis of the freedom struggle spearheaded by Mahatma Gandhi that the idea of Indian nationhood gradually evolved. This history lesson needs to be taught to all those over zealous patriots waving tricolours and shouting “Bharat Mata ki Jai”!

The participants were keen to hear Kanhaiya Kumar, the new star in the firmament. He did not disappoint. He said that he would share his personal experiences as also his aspirations since he has now joined the Congress party.

He felt that this was not a Hindu-Muslim divide; rather it was a perception battle between half-truths and reality. Today perception is being presented as truth. Half-truths and lies confuse people. They are not spoilt for choices; they are unable to make a clear choice.

Talking as a Congressman he said that today those who earlier glorified Godse now go to pay obeisance at Rajghat. Taking a pot shot at the AAP in Punjab that has removed the Mahatma’s photos from government offices; they would rush to Rajghat to defend their liquor policy he said.

He recalled that as a child he once saw a magician convert a scrap of paper into a currency note. The opposite is true today with the BJP government converting our currency into a scrap of paper, with the US dollar now trading at Rs 80/-. This is why the government’s publicity brigade spends crores of rupees on trying to explain run away inflation and the slide of the rupee.

This government is indeed a “double engine sarkar”. The two engines also have only two bogies attached. One does not need to specify who those 2+2 are. That is why they could not even tolerate a very efficient minister like Nitin Gadkari.

Sanjay Singh said that today’s TV debates are like slinging matches, spewing hatred. It is ironic that corporate tax is reduced from 30% to 22%, while essential commodities like milk and flour were being brought into the tax net. He claimed that this government was hell bent on selling off all the country’s assets accumulated over the years – be they ports, airports, railways or PSUs. Even the Agniveer scheme is another example of the government abdicating its responsibility.

He further said that we should not fight shy of religion; just as Mahatma Gandhi was a deeply religious person, yet fully committed to secularism and pluralism. The time had come for all political parties to set aside their differences, to work for India’s second freedom struggle, he said.

Therein lies the conundrum. Politicians pay lip service to opposition unity in closed rooms. When they go out they tear each other apart like cats and dogs. If that continues, our idea of India will remain a mirage. Majoritarianism will convert us into a melting pot, with a shrewd alchemist at the helm of affairs. So much for Nehru’s salad bowl!

I daresay that what politicians cannot do, we conscientious citizens must, through both individual and collective efforts. Let us never give up hope, for then the perception and all other battles will be lost. (I too had presented an audio graphic that I shall report separately).

So what is our Idea of India today? Is it an Ideal society that cannot be faulted? Is it Idle, because armchair critics limit their social commitment to forwarding messages on social media platforms? Is it an Idol that has replaced reality with a mere perception? Every Indian needs to answer these questions.

•    The writer was invited to participate in this seminar in his capacity as Convenor of the Indian Catholic Forum.