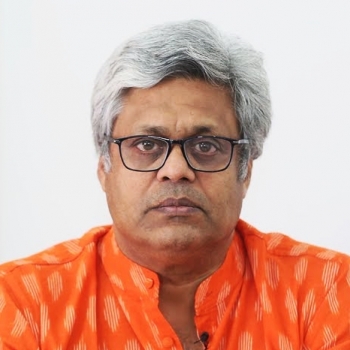 If not Govt, Then Who has Done Snooping, asks Senior Journalist

Massive protests inside and outside Parliament and serious debates on the Pegasus spyware surveillance issue have become national headlines. The issue has serious overtones as the spyware was used to snoop on senior political leaders, journalists, bureaucrats, rights activists, lawyers and so on in several countries including India.  Hundreds of phone numbers of Indians appeared on the list that included Congress leader Rahul Gandhi; Ashok Lavasa, former Election Commissioner who was considered an obstacle to the ruling party; and M. Hari Menon, the local head of the Bill and Melinda Gates Foundation.

Web portal, "thewire.in" recently broke the story on Pegasus claiming that the Government is using the spyware to snoop on citizens who are mainly critical of the government.

Anju Grover spoke to the founding Editor of TheWire, M K Venu, to know more about the issue, its impact on media, government and society.

Venu, whose name figures in the list of journalists whose phones were tapped, said the issue was not about the BJP-led government alone. It is an issue which threatens democracies across the world. He urged the government to order an inquiry to know at whose behest snooping was done. Media bodies such as the Press Club of India and the Editors Guild of India have condemned the alleged snooping on journalists and others using a spyware while demanding a 'Supreme Court-monitored inquiry' in the matter.

Q: Your views on Pegasus scandal?

A: It is an existential threat to journalists as also common citizens. The issue involves privacy and human rights of journalists who have been using phones for fulfilling their professional responsibilities. It is a major assault on citizens’ privacy and nothing short of hacking of democracy. It is not about the BJP government or an international conspiracy to destabilise it.  It is a global issue which is being examined by media in at least 16 countries. In India, phones of 21 journalists have been tested and 10 found to be infected by Pegasus. I am one of them.  My co-founder Siddharth Varadarajan is also targeted. So many countries are involved in it as the issue is about Pegasus, an Israeli company which has close links with the Israeli government. It legally sells spyware to 40 countries with the condition that it will only be used for national security purposes or to counter terrorism and crime. Ironically, the company itself conceded that it is possibly being used by governments for purposes other than national security or counter terrorism. France has already ordered an inquiry.

Q:  Did you ever realize that your phone was under surveillance?

A: I never realized it. But we have been hearing about various ways adopted by the government to listen to people’s phones. It was only in the realm of rumours. The whole episode has given credence to fears that it does exist in India and elsewhere. Head of the Citizens Lab, a research group at the University of Toronto that specializes in studying Pegasus, has called for moratorium on use of Pegasus. The Citizens Lab had helped WhatsApp sue Israel's NSO Group for exploiting vulnerability in its app to allow its Pegasus malware to gain access to user devices in 2019. The same Citizens Lab has helped in testing phones in the present episode.

Q: Phone tapping is not a recent phenomenon. Several incidents have been reported in the past. Your views.

A: Yes, It is not new. It has happened in the past also. Its scale and scope has increased manifold with the advance of Internet technologies. Under the Indian Telegraph Act, the government has to follow strict procedures and seek Home Secretary’s permission, and in the case of States seek Chief Secretary’s permission before intercepting any phone. The arrival of internet has changed the rules of the game. Under the IT Act, the government follows strict procedure before tapping any phone or online platform for national security purposes. But in India, the permission is given by a politician or bureaucrat and not judicial authority. The permission by a politician or bureaucrat for phone tapping leaves room for misuse of such provision. In the US or other European countries, the permission is granted by a judicial authority. India needs to move to that (level).

The government maintains that it has no role in Pegasus snooping scandal. If not the government then who (has the role)? It means that the snooping was illegal. Then it is a bigger threat to national security. Therefore, it becomes all the more important to hold an inquiry into the matter. France has already ordered an inquiry.

Q: Senior Congress leader Manish Tiwari has suggested reforms on the working of intelligence agencies. What is your take on this?

Q: Pegasus expose has created fear among journalists. Do you agree?

A: Pegasus has a chilling effect on journalists. The Central Government or state governments have been resorting to all kinds of threats via legislation or FIRs or criminal defamation. It has been going on for the past few years. UP Chief Minister Yogi Adityanath has been filing sedition and criminal cases against Editors like Rajdeep Sardesai, Mrinal Pandey, Siddharth Varadarajan, Zafar Agha, and so on. Journalists are very upset. There is immense resentment among journalists against the BJP government’s undemocratic and authoritarian ways of dealing with media.

Q: What is your suggestion on the next course of action post Pegasus?

A: The government should order an independent inquiry into it. If that does not happen, then media bodies may approach the court for intervention.

Q: The issue is not India-centric. Do you plan to contact media bodies from other countries and raise it at global level?

A:  At global level, Reporters Sans Frontiers (RSF) are filing cases in various countries, and other human rights organisations are proactive. This is a global issue as several democratic countries around the world are getting affected by highly intrusive legal spyware Pegasus. It is now being used by various authoritarian regimes like Saudi Arabia, Azerbaijan, Rwanda, etc. In authoritarian countries, worse has happened with journalists as several of them have been killed or persecuted. The Israeli Government is in the defensive mode on this and is even considering setting up its own inquiry on whether Pegasus is being misused by governments to whom it is sold.

Another dimension to spyware discovery is its negative impact on Apple's market. Apple issued a statement condemning the Pegasus attack on citizens. Apple’s iPhone is marketed as the most secure phone. That brand image has been shaken by the Pegasus attack. I am hoping Apple will take legal action against NSO like WhatsApp did some years ago when there was a massive Pegasus attack on its system.