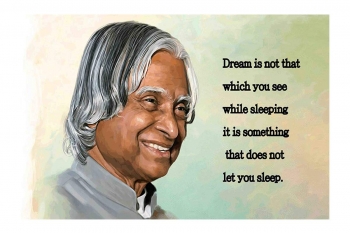 Time was when our visionary leaders inspired us and taught us to dream dreams. They taught us to dream a better India, a united India, a democratic India, and a secular India. The leaders, who shed their sweat and blood to win our freedom, told us that it was not enough to sit on our laurels of the newly acquired freedom. There were miles to go, paths to tread and heights to climb.

Mahatma Gandhi, Jawaharlal Nehru, Vallabhbhai Patel, B. R. Ambedkar, Jayaprakash Narayan, Lal Bahadur Shastri, Rajendra Prasad, Sarvepalli Radhakrishnan. V. P. Singh, A. B. Vajpayee, K.R. Narayanan, A. P. J. Abdul Kalam, and many others, stood tall and gave us a call to build India to make it worthy of its name. They did not stand on ceremonies! Some of them, though diminutive figures and of humble origin, did not cover it up with the glitz of a fashion ware. They considered the Constitution as the Bible of every Indian and urged every India to keep it sacrosanct and to make sure everyone benefits from it.

Dr. A.P.J. Abdul Kalam, India’s eleventh President, gave us this watchword: “Dream is not what you see in sleep, dream is something that does not let you sleep.” That was his clarion call because he was a gem of a visionary, who not only dreamt of a prosperous and happy India but also taught us to translate dreams into thoughts and action: “Dreams transform into thoughts, and thoughts result in action.” Thus, Kalam stormed into the hearts of people and pervaded there like a murmuring breeze and a genuine guide.

Today, how many of our political leaders can we count as visionaries with a missionary zeal to inspire us with their exemplary life? How many of them can animate us to forge ahead with confidence and vigor? When my leader tells me, “Ask not for lighter burden, but pray for the miracle of a broad 56-inch chest,” I feel quite uneasy and confounded.

India’s economy has beaten that of Britain. But to what end? Does it help India’s crores of poor nationals to live with better dreams, better facilities of basic needs, better education for their children, better health facilities for their families? Or, are they to live with those rationed ‘revdies’ as benevolent benediction from the ruling class and as part of their dream sold to them by our self-styled national dream merchants?

How many of our unemployed can dream of a better future or are they still to live with the long-lost promise of 15 lakh from the Swiss bank yet to come after years of promise? How much can we dream of a self-reliant India when our public assets and institutions are sold out like hot cakes to crony capitalists? Is this part of the ‘Make in India’ dream? Someone has very well said: ‘When everything is sold out, the government and the bureaucrats will have nothing to do except dream dreams and sell dreams like the Kabuliwalla.’

Why do our political leaders have to behave like windbags and teach us to chase the windmills of dreams in Don Quixote style? When our pompous leaders romp the ramp of glitz and glamour for an image-boosting exercise with their ever-changing dress code, how capable are they to listen to the cries of the poor and the agony of the unemployed?

Gas prices can go up. Those ‘revdi’ gas cylinders, supplied to the BPL people with much fanfare by the Modi dispensation, are getting rusty in their backyards for lack of purchasing power to get refill. Time was when Smriti Irani-led people beat empty gas cylinders and drums because Manmohan Singh government had raised gas price from Rs. 450 to Rs. 500. Today, when the gas price has scaled to Rs.1100 or more, the BJP drum-beaters have lost their steam and gone mute.

Today, India does not need dream merchants who, with their idyllic and idiotic promises, take us to the suicide point in frustration and revulsion. We don’t require dream pushers and dream agents or sales managers who promise to teleport us into an ethereal world, and themselves go back to their own plush hideouts, leaving us in the lurch. We get the ‘privilege’ of being pushed into choppy waters to fend for ourselves, thanks to our visionless and short-sighted leaders.

The nation needs leaders who can travel with us, listen to us, guide us and responsibly do their duty. Only men of integrity can come anywhere near this requirement. When the leaders and politicians are mired in controversy with regard to their public performance or corruption, how can we trust them? The only time they listen to us is election time. After that they go into switch off mode. The next we see them is when they use their lung power in the Parliament or State Assembly to shout and outshout.

We have dreamt far too enough with the dreams sold to us by the present-day dream merchants with their tomfoolery or jumla-bazi. Let us not be thought of as Bollywood-Koliwood film-goers who get entranced by mesmerizing and benumbing scenes to forget for a while life’s agonies. Today’s generation is more intelligent than many political leaders and is capable of dreaming of throwing out lying and lynching politicians and their gangs. Time has come to deflate those dreamy and scatter-brained politicians who play games but don’t govern; who divide, not unite!