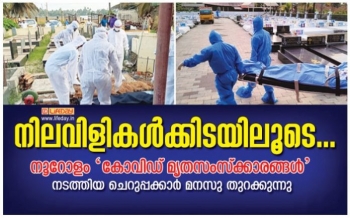 In the Midst of Sobs and Tears

“My 23-year-old son has died. Will you come and lend a helping hand in burying him.” The man at the other end sounded helpless. These words were enough to melt Arun’s heart, for he too is of the same age. “Sure, we will come,” saying this Arun put down the phone.

Arun and his friends get such phone calls regularly these days. They have helped in burying close to 100 covid victims in the last few months. And each time it turned out to be a tearful, emotional occasion.
Arun Joseph Nedumparambil is a parishioner of Thuruthi Martha Mariam Forane Church and M.Com second year student in S.B. College, Changanassery in Kerala. Here he and a youth group are sharing their experience during these Covid days.

Till now the group has undertaken burial of close to 100 Covid victims. As many as 15 have been laid to rest during this second wave of the virus. Each occasion turned out to be a different experience, with touching scenes and emotional outbreaks. The group consists of 15 youngsters from Thuruthi parish – Arun Joseph, Kurien George, Alvin Lalimon, Mebin Thomas, Kevin Xavier, Roshan James, Jithu Josey, Jomon Abraham, Jinson Francis, Jojo Joseph, Akhil Joseph, Jinu Jacob, Somu Joseph, Tony Antony, and Mobin Thomas.

In August last year, Arun had received a phone call from Fr. Gregory Meppuram, assistant parish priest of the Thuruthi church. “An awareness class is being held on the formalities on conducting the funeral of Covid victims. It is being led by a doctor. Can you attend it?” the priest asked.

As per the wishes of the priest, three youths from the parish -- Arun Joseph, Kurien George, and Alvin Lalimon – attended it. Altogether eight youngsters, seven priests and four nuns attended the class, apart from Bishop Thomas Tharayil.

The moderator explained in detail the procedures to be followed in conducting the funeral of Covid victims. And the first burial of a Covid victim, which they conducted, took place two weeks later. It was at Kulathurmozhi on August 23 last.

The call for this came from the director of Yuva Deepthi, Fr. Jacob Chakkathara. Though Arun and his team members were alerted by the priest on the difficulties involved, the youth group decided to take up the challenge.
Five of them proceeded to help out in the burial ceremony which was an experience in itself. They got a taste of the pain of people who are isolated; they realized the agony of being part of a Covid funeral and the subsequent moments of distress and heartbreak. It was only the beginning of many more such experiences.

Arun and the group members have many such emotional stories to tell. In the beginning of January this year, the team was called to help out in the burial of another Covid victim in a church near Changanassery. The youths, putting on all protective gear, went to take out the body from the mortuary when they were told that someone wanted to talk to them.

The deceased was an old woman and her husband wanted to meet them. Both were Octogenarians. They were admitted in the same hospital. The woman breathed her last and her husband had come to have a ‘last look’ at his beloved. It was an emotional ‘meeting’ which brought tears in the eyes of the onlookers.

They were admitted to the hospital together, but the woman left him forever. After the old man said good-bye to his better-half, he turned to the youths with a heart filled with gratitude. His words, in the midst of sobbing, touched their hearts: “Sons, thanks a lot. I have nobody else to come here. She has left me, leaving me alone.” After saying these words, he went back to the hospital.

A few days later, another call came from the same parish for yet another burial and the team went there to take up the job. They had the shock of their life there. They had to bury the same ‘old man’ who had gone back to the hospital, after offering thanks to the youths with tearful eyes. “We did not know what we heard that day was his last words. Those words are still echoing in our ears,” said Arun choked with tears.

A day of three burials

The youth team has been faced with situations beyond their control as there are days when many calls come one after the other. “On the morning of April 30, we had to bury a body at Chethippuzha and another at 11 a.m. at Arumannor. While we were at the second place, yet another call came but we could not make it to the third one. Two more calls came to us, but we could take up only one more. By the time we reached home at 7.30 p.m. we had completed three burials,” narrated Arun.

Initially, many people had questioned Arun and his team over their work and looked at them with skepticism. Many people kept a distance when they came back after helping in burials. There were youths, relatives, people of the same parish and teachers in this category. In college too, they had to face similar queries.

However, things have changed over a period. Their service is greatly appreciated today. Many of those who turned their face away from the youngsters are coming to them now seeking their help.

Some phone calls and incidents are heart-breaking. When the near and dear ones leave for ever, falling victims to Covid, it leaves the relatives in great pain. Aun narrates one such phone calls: “Recently, I got a phone call at around 9 p.m. ‘There is a burial tomorrow. Can you come and help,’” the man at the other end said. “When should I come,” I asked. “We have to receive the body from Allappuzha Vandanam Medical College, and take it for burial,” he said in a feeble voice.

“Is the deceased an old man,” Arun asked. “It is my son. He was 23 years,” Arun could feel tears trickling down the father’s face when he said it. He could not talk further and Arun could hear only his sobs.

A burial on the eve of exam

Though there were 15 members in the team, not all were free on every occasion. On certain days, when a call came, there was dearth of personnel to go to the spot. Once on the eve of Arun’s semester exam, two calls came seeking their help.

When the first call came, four of the team members were deputed for it and Arun preferred to stay back as he had exams the next day. But when one more call came after sometime, Arun could not make any excuse as many of his team members were not available. He was forced to go for it though he had semester exams the very next day.

Covid has turned out to be an equalizer.  It has made the rich and the poor, the powerful and the powerless – all equals. Arun narrates one such incident: One day a rich man died. We got the packed body from the hospital. If someone wanted to have a look at it, the sib of the packing could be partially opened, and nothing more.

The family members wanted to change his dress as he was still wearing the clothes in which he was taken to the hospital. When they were told of the inability to do so, they broke down. They placed new dress on the top of the coffin. One could see their tears dropping on the top of the coffin. “Our dad was not supposed to take his last journey like this way. This is not the way he lived,” the siblings were heard saying amid loud wailing.

The young covid volunteers saw helplessness in the eyes of the siblings of the victims. Their cries still echo in these youngsters’ ears. Still their noble gesture loudly proclaims that we should not fear Covid. Instead, we should remain alert to the dangers of the virus.

There are any number of such fearless youngsters in every religion who work for others placing their lives on the block. They don’t do it for power or prestige. They do it out of conviction; they do it as if it is their duty.
Arun and his friends are the unknown heroes of our society. They are the hopes and promises of tomorrow. Let us salute them respectfully with folded hands.