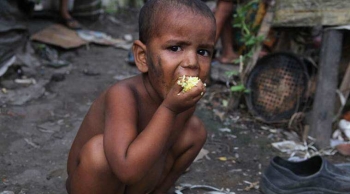 “My country is rich in the minerals and gems that lie beneath its soil, but I have always known that its greatest wealth is its people, finer and truer than the purest diamonds”, wrote Nelson Mandela in his autobiography, ‘Long Walk to Freedom’.
Human beings are the most important and the richest resource of any country or organization. When the rulers and leaders replace people with something else as their topmost priority, the consequence is increase in poverty, hunger, unemployment, crimes etc. People of India have been experiencing this bitter truth, especially after the unplanned and callously imposed lockdown due to Corona 19.

According to the Global Hunger Index (GHI) 2020 published on 17th October, India ranked 94 among 107 countries and it is in the ‘serious’ hunger category.  Last year India’s rank was 102 out of 117 countries. The neighbouring Bangladesh, Myanmar and Pakistan are also in the ‘serious’ category; but it is not a consolation for India, as they are ranked higher than India in the GHI 2020. While Bangladesh ranked 75, Myanmar and Pakistan are in the 78th and 88th position. India’s neighbours, Nepal with 73rd rank and Sri Lanka with 64th rank are in the ‘moderate’ hunger category.

The report has brought to light that 14% of India’s population is undernourished, 37.4% children below the age of five are stunted and 17.3% are wasted. The under-five mortality rate is 3.7 percent.
The GHI score is calculated on the basis of four indicators: undernourishment among the general population, and child wasting, child stunting and child mortality among the children under the age of five.  Child wasting refers to the children who have low weight for their height and child stunting refers to children under the age of five who have low height for their age. Both reflect acute and chronic under nutrition. Data from the United Nations and other multilateral agencies are used for the calculation of GHI.

The progress of India in Human Development has been very tardy. India ranked 129 out of 189 countries on the 2019 Human Development Index (HDI) - up one slot from the 130th position last year, according to the Human Development Report published on 9th December 2019. HDI is calculated on the basis of three dimensions of human development- Life expectancy, education and per capita income. India has failed to give sufficient attention to Human Development in its policy formulations and implementation.
Commenting on India’s rank in the GHI, Rahul Gandhi, the Congress leader, tweeted, “India is poor and hungry because the government is busy in filling the pockets of some of its special friends”. There is some truth in what Rahul Gandhi has tweeted. The gap between the rich and the poor is increasing enormously under the BJP rule. OXFAM India Report 2020 has brought to light the astonishing wealth gap between the rich and the poor. India’s top 10% population holds 74.3% of the total national wealth and the top 1% of the population holds 42.5% of India’s total wealth. The bottom 90% has only 25.7% of the country’s wealth. The wealth of top 9 billionaires is equivalent to the wealth of the bottom 50% of the population.

What could be the reason for the present economic slump, rampant unemployment and increase in poverty and hunger? According to Food and Agricultural Organization’s (FAO) report- The State of Food Security and Nutrition in the World 2020 Report- 189.2 million people or 14% of the population of India are undernourished in India. It is a strange paradox that about 200 million Indians are hungry while India has a huge amount of surplus food grains. Is it not a failure in governance that warehouses are overflowing with excess food grains on the one hand and people are hungry on the other hand?

The failure of the Modi government to focus on the promises it made to the people of India during the 2014 Lok Sabha election and the arrogance and obduracy with which it has implemented its ideological agenda could be the reasons for the present dismal scenario. The foundation of these ideological agenda is hate, revenge and exclusion.
The BJP had promised in its election manifesto in 2014 to end corruption, bring back black money stashed in foreign banks, generate 10 million new jobs a year, and ensure good governance and sabka Saat Sabka Vikas and Vishwas (Trust and development of all).
What has happened is just the opposite. Even before the starting of Covid 19 and consequent lockdown the economy was already in bad shape because of the disastrous policies of the Modi government in its first term like demonetization and the unplanned and the reckless implementation of GST.

The second term of the Modi government has been marred by destructive and divisive policies and actions. Abrogation of article 370 and 35A of the constitution and the bifurcation of Jammu and Kashmir State into two Union Territories pushed the State into a war zone by arresting and imprisoning political leaders and imposing communication blockade for more than a year and causing untold suffering to the people of the State.
The hasty passing of the divisive, discriminatory and unconstitutional Citizenship Amendment Act (CAA) coupled with the declaration of nationwide preparation National Register of Citizens (NRC) led to non-violent protests throughout India and the government used violent means to suppress the protests, including booking the protestors under the draconian laws like Unlawful Activities (Prevention) Act (UAPA), National Security Act (NSA) and sedition law.

The totally unplanned and most strictly implemented lockdown in the wake Covid 19 resulted in the economic slowdown and heart wrenching scenes of millions of migrant workers walking hundreds of kilometres to their homes from the metros of India in the absence of any kind of transport. The government was unwilling to reach out to the hapless migrant workers. Lack of sensitivity and compassion from the part of the government was evident throughout the migrant workers’ crisis.
In spite of the repeated recommendations and requests by the economists and political leaders to provide fiscal stimulus to the tune of 5% of India’s GDP for boosting the economy, the government has not responded positively. The total fiscal stimuli already announced by the government add up to barely 2% of the GDP. Many are wondering why the government is not able to see the suffering of the people due to unprecedented job loss and the devastation caused by Coronavirus spread.
Despite the shrinking economy and financial crisis faced by many states in the wake of Coronavirus infection and the lockdown, the Modi government refuses to stop extravagant spending. For example, the Central Vista Project that includes the construction of a new triangular shaped parliament house is not at all needed.

Many opposition MPs had forcefully argued in the Parliament to drop the project. Former president, Pranab Mukherjee had suggested that the existing parliament could be renovated to respond to the requirements of more space.  The Congress working president Sonia Gandhi has vehemently opposed the project and appealed to the government to reallocate the budget “for more pressing and urgent health requirements”. But the government seems to be adamant on implementing its plan.
Because of the failure of the government to build friendly relationships with India’s neighbours the country is in a precarious situation.  While facing the financial crunch and the fall out of the pandemic Covid 19, it is forced to spend huge amounts of money on defence and purchase of arms. According to a report published by Swedish think-tank Stockholm International Peace Research Institute (SIPRI), with an expenditure of $71.1 billion in 2019, India has emerged as the third largest military spender in the world, just behind the US and China.

It seems that the BJP government is not able to focus on governance issues and solving the problems of the people because of its preoccupation with expanding its power base and implementing its ideological agenda. Ever since the BJP came to power at the centre in 2014, it has been constantly in an election mode in order to capture power in the states.
The RSS and the BJP have succeeded in creating fear in the majority Hindu community that the Muslims are terrorists and supporters of Pakistan and hence a threat to the nation and the majority Hindu community.  Through the print, electronic and social media hatred against the minorities, especially the Muslims, has been injected into the veins of the Indian society and a large section of the majority community blindly believes the hate propaganda. As a result, a large section of the population is brainwashed with the notion that only the BJP and PM Narendra Modi can save the country and the Hindus. It appears that because of the religious brainwashing the people are ready to put up with the pain and suffering arising from hunger, job loss, and lack of health care facilities.

The main opposition party, the Congress has to take initiative to bring together the opposition parties and put pressure on the government to focus on the urgent and essential needs of the people and to give up its anti-people policies.  In spite of the harassment from the government, the civil society organizations have to continue to make the people aware of the harmful policies of the ruling party that divide people and crate suspicion and hatred towards particular communities. The need of the hour is building trust and harmony among the different sections of the society and showing compassion to the needy and suffering.
(jacobpt48@gmail.com)