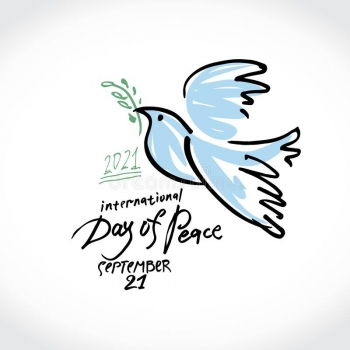 The 21st day of September is marked as ‘International Day of Peace’. It is officially known as ‘World Peace Day’, too. The day is declared so by the United Nations Organization. The day was first celebrated in 1981 and has been observed by most of the nations, political groups, military units and people. Obviously, the day is dedicated to ‘world peace’, in all possible ways.

Inaugurating the day, the ‘United Nations Peace Bell’ is rung at UN Headquarters in New York City. The bell was cast from coins donated by children from all continents, except Africa. It was a gift from the United Nations Association of Japan, as a ‘reminder of the human cost of war’. The inscription on its side reads, ‘long live absolute world peace’. A ‘global minute of silence’ at noon is a world-wide observance and it creates a ‘peace wave’ across the planet, for sure. ‘Flying the dove’, as the symbol of peace, is another mark of aspiring for peace, as well.

A few of the ‘objectives’ of the world day of peace are the following, ‘enforcing ceasefire in combat zones, emphasizing the absence of war and violence, strengthening the ideals of peace, introducing sustainable measures and educating people to that effect’. The day includes both preventive and corrective procedures. The idea of peace highlights notions of ‘democracy, dialogue, development, dignity, respect, right, education, partnership’, and the like, too.

The United Nations, through its sustained initiatives, kept on motivating the world for peace, ever since the first year. Two decades later, in 2001, its General Assembly unanimously opted for designating the day for strengthening the ideals of peace, through observing 24 hours of ‘non-violence and cease-fire’, as well. Besides, the United Nations invited all nations and peoples to honour a ‘cessation of hostilities’ and to edify people, through programmes of public awareness, on ‘friendly ways’ that lead to peace.

Delivering a ‘100-day countdown’ to the International Day of Peace, Antonio Guterres, the UN Secretary General, stated, “let us all create peace day everyday”! Well, the entire world is invited to join the efforts of the United Nations family across the globe in fostering the spirit of peace. Focus has to be placed on recovering a more equitable and peaceful, and of course, a better world. ‘Sustainable development goals’ of the United Nations, of course, will serve a ‘street light’ for our way to building a ‘culture of peace’.

‘Peace of God’ in 989 and ‘Truce of God’ in 1027 were peace movements in history. ‘Nobel Peace Prize’ in 1901 boosted up the peace initiatives, too. Besides, John Lennon and Yoko Ono spent 8 days in bed to promote world peace in 1969. The motivational song ‘Give Peace a Chance’ was recorded during this eight-day period. Sane voices and efforts have to keep coming up, all the more, and sustain the human world in particular and the earth in general peaceful, in view of a life that is meaningful, peaceful and happy.

Iceland is ranked the ‘most peaceful country’ in the world, as per the Global Peace Index, from 2008 to this day. Being satisfied with the backbenches does not give any credit to being a nation or a people, anywhere. The nations have to evolve beyond petty, polarized and distorted ideas of nationalism, along with discriminative and divisive policies and practices. Will other nations take inspiration from Iceland and make their country, India or whatever, at least a little more peaceful? That is the question India as a nation and all nations can never escape from.

More often than not, it is thought by religionists that ‘peace is within oneself’ and is ‘oriented to self-realization’ or heaven above. Meditation, and the like, is prescribed for attaining the same. But, in point of fact, this ‘individual peace’ is only half the truth. There is a ‘social peace’, too, which is between persons, families, institutions, communities, nations, peoples and in the entire society, along with the whole creation. Absence of social peace renders the individual peace fruitless. In other words, social peace is the real outcome of the individual peace.

Well, friends, peaceful life is the fundamental right of every human being. A ‘sense of togetherness’ is a basic requirement for peace. Peace in the society requires ‘justice’ being measured out to everyone. Caring for the other, serving the other and making a sustainable and humane world are the collective pathway to peace. Peace makes human lives worth being lived. Promoting peace is the ‘divine’ way of living a human life. Only peacemakers and peacekeepers can think of making the world better, as a more peaceful place to live in.

Certainly, a world family peace is possible. We humans are made for each other. We are intended to be friends and brothers or sisters to each other. It is high time we rose again above the nonsense of hatred, enmities, lynching, social distancing and communal and national divide. Having shed the junk of selfish, arrogant, fanatic and hateful ways, we have to learn to be kind and courteous to one and all. The ‘divine image and likeness’ the humans are endowed with is the inner character that ensures our collective and brighter future. Could the humans make a ‘refresh’, if not a ‘restart’, in favour of a more peaceful world? This is the sharp question that you and I have to answer, right now.