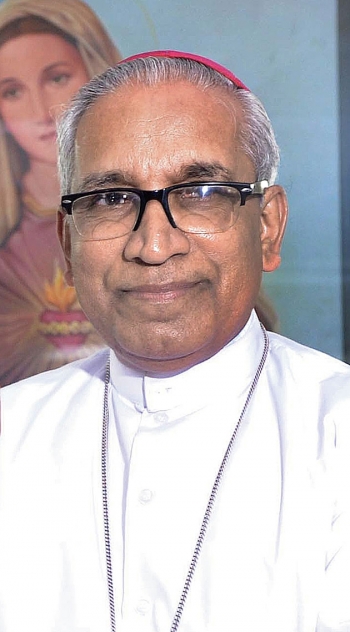 Ans - As I understand it, ‘inclusive society’ includes all people in its relationship and outreach. In other words, it excludes no one from its service or issues that deal with justice and human rights. A Christian considers all as brothers and sisters. Such a vision excludes discrimination based on caste, creed or gender. Since, according to Christian faith, every person is created in the image and likeness of God, service to the poor, neglected, and oppressed becomes a priority for them. This means, working for the rights and human dignity of any person, is an integral part of this Christian vision of inclusive society.

Ans - Jesus told us: “A new commandment I give to you that you love one another; just as I have loved you, you also are to love one another. By this all people will know that you are my disciples, if you have love for one another” (John13:34-35). "Greater love has no one than this, that someone lay down his life for his friends” (John 15:13) and Jesus died for us. Jesus showed the way to love one another through humble service: “If I, your Lord and Teacher, have washed your feet, you also ought to wash one another's feet” (John 13:14). “Whatever you did to the least of my brothers and sisters, you did it to me” (Matthew 25:40).

Therefore, Christian living tries to put these teachings of Jesus into practice. Parents teach this to their children by word and action. Compassion which is a human virtue, takes on a new and deeper meaning in Christianity with Jesus’ teaching on love and mercy.

The Christian way of serving the poor is by doing acts of mercy and charity: helping them in their needs for food, shelter, education and above all working for their rights and dignity as human beings. Working for justice by creating an awareness of their rights (human rights, rights as citizens guaranteed by the Constitution of India etc) are also ways of serving the poor.

The motive to serve the poor is not to convert them, but to respond to their immediate need such as hunger or sickness, or by trying to remove injustice or discrimination from their lives by making them aware of their rights, through education etc, or helping them to live as persons with human dignity. Charity or working for justice is a Christian response to inhuman or unjust situations. Poor people are helped to live as human beings through charity and service.

Ans - No. The Church works for justice and human dignity of people, especially the poor and oppressed because that is the commandment of the Lord Jesus:     “Love one another as I have loved you”. While serving the poor, keeping in mind the commandment of Jesus, the Church may join hands with Movements of people of good will who also want to work for justice or     rights of the poor, but who follow the way of the Gospel: non-violence, justice and peace. We spoke of ‘inclusive society’ earlier. That ‘inclusive’ character of Movement will strengthen those who want to serve the poor, but     a Christian will do so upholding the values of the Gospel and the Constitution of our country. So, it would not be proper to brand someone as leftist or rightist simply because that person is working for the poor. The criteria would be: Is the person, while serving the poor, upholding and practicing the teachings and values of the Gospel, and as citizen of India upholding the values enshrined in the Constitution of India.

Ans - The Church's faith-response to situations of injustice demands that she works for justice in the spirit of Jesus: taking up human dignity and  rights issues with and on behalf of those whose human and constitutional rights are violated; going to court in order to get justice for the suffering and poor people; organising and making the people aware of their constitutional rights etc.
At the same time, the Church is engaged in nation-building through education, health care, social and human development especially of the poor and marginalized, dalits and tribals. The Church collaborates with the governments in those programmes which are for the benefit of the poor and which sustain the poor in their human dignity and rights. When the policies of the government are anti-poor and anti-Constitution of India, then the Church does not hesitate to oppose them.

Ans - That may be the impression but it is not true.  The truth is that the Church has always supported activities of priests when those activities to fight for the rights of Tribals and Dalits are non-violent and proceed out of love and concern for them. Pope Francis has been a strong supporter of those who fight for the rights of others, especially the poor and marginalized. He speaks as the prophetic voice of the people who are poor, sick and suffering, denouncing injustice, immorality and selfishness.
Although Fr Stan Swamy's work for the  poor, the Dalits and Tribals was not widely known outside Jharkhand when he was alive, the Church always stood by him, appreciating his good works. Of course, after his death, the positive response of the Church to Fr Stan and his work is indicative of the love and respect with which he was held by the Church.

Ans - The Church's response to the death of Fr Stan Swamy was not lukewarm. On the contrary, the Church was regularly organizing prayer meetings, protest meetings demanding justice even when Fr Stan was arrested and sent to Pune jail. Spontaneous protests, prayer meetings, silent gatherings, etc. were held throughout the country. The shock and anger were expressed even on the social media. Thus, the Church was quite vocal in expressing its response to Fr Stan's death.

Ans - I think it is true. It is a matter of perception. Those social activist priests who are quite active, even vociferous in their protest, good organizers of grassroots groups, or found with the poor and oppressed people, are labeled as 'Marxists' by those who do not know them; but the fact is, those     priests have not been using Marxist ideology in their struggle against injustice such as violence. Their activity is based on the teachings of Jesus and the social teachings of the Church.

Ans - No. I do not agree with this view. Those few of the Church personnel in the fight for the rights of Tribals and Dalits are fighting in the name of the Church, as a prophetic call received from Jesus through Baptism, denouncing falsehood and injustice, and upholding human dignity and rights based on the values of the Gospel and the Indian Constitution. They are like the frontline soldiers who challenge the enemy with boldness and courage. Their involvement is spiritual, stemming from their Baptismal commitment as disciples of Jesus.

Ans - Yes. The Church has to be more pro-active in the struggles for the rights of Tribals, Dalits and others. We must pray for the gift of boldness as the Apostles prayed when they had to face opposition because they were proclaiming about Jesus risen from the dead. The Church has the obligation     to proclaim the truth. Fr Stan Swamy has given the example; others must follow. St Ignatius of Loyola prayed: "Lord, make me generous: to fight and     not to heed the wounds"!

Ans - It used to be so; but now the Church is more and more 'people-oriented'. The involvement of the Church in the lives of the people is more visible today than before. The prophetic mission of the Church must be carried out by all the members, especially the Laity. Pope Francis has been a great promoter of justice and peace.