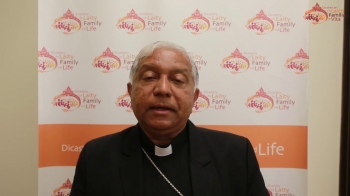 Q 1. What is the Christian vision of inclusive society?

Ans - The Christian vision of inclusive society springs forth from the life of Christ himself, “who went about doing good”. He announced his manifesto and said, “The Spirit of the Lord is upon me, because He has anointed me to preach the good news to the poor. He has sent me to proclaim release to the captives and recovery of sight to the blind, to set at liberty those who are oppressed.”

The stories that Christ narrated gave an all-inclusive vision of the society. He concluded the story of the Good Samaritan with this challenging appeal – “You too go and do likewise!”. The Good Samaritan’s heart melts at the suffering of the other and offers him all support and possible help.

Q 2. Why are the Christians inherently charitable? What is the Christian way of serving the poor and how does that not become an act of religious conversion?

Ans - “You too go and do likewise!” is the expressed desire of the Divine Master. Jesus has three basic demands to his disciples Jesus: to be with him, to heal the sick and to preach the Good News. Moreover, the foundation of Christian faith is built on the mystery of the Holy Trinity. It implies communion, mutual acceptance, and inclusion of everyone in every aspect of life. Generally, there is a tendency to misinterpret the Christian charitable work as an effort to convert people from other religions to Christianity and hence they blame Christian missionaries. The anti-conversion bill and campaigns like ‘ghar vapasi’ are targeted to this end. The Christian community needs to manifest very clearly the stand regarding every charitable activity, as clarified by Saint Mother Theresa, that it is towards conversion of the heart for the betterment of humanity.

Q 3. Does the Church align with any political movements such as leftist/rightist, Marxist, capitalist, socialist, Maoist?

Ans - The Church neither singles out any political party nor it exclusively aligns with any political ideology or movement. The main reason is because it has its own mission and aim in being in the world and work in the society. In her struggle to uplift the people, the Church may work along with various groups. Often this involvement is misinterpreted and criticised, which is a fact.

Q 4. How does the Church involve in acts of justice while contributing to nation-building and working in tandem with the ruling governments?

Ans - The Church’s involvement in acts of justice has awakened the social sensitivity of people belonging to different faiths, cultures, ideology, languages, and ethnicity. The active presence of this miniscule Christian community in the field of education, healthcare and social development has contributed much to nation-building. The caring of the sick, educating the young, uplifting the poor, etc., are indeed efforts of the Church, together with putting into practice the evangelical precepts, to bring alive the fundamental principles of the Constitution of India, along with the ruling governments.

Q 5. An impression has been created that the Church hasn’t extended enough support to the activities of priests like Fr. Stan Swamy in their fight for the rights of tribals and Dalits. What is the reality?

Ans - According to me, Fr. Stan Swamy had been continuing the rich heritage of the Church’s fight for the poor and upliftment of the adivasis that began centuries before. Let us take the case of the Church in Chotanagpur itself. From the pioneer Belgian Jesuit missionary, Father Constant Livens, there has been a consistent effort from the Church to bring justice and integral development to the marginalised people. Father John Baptist Hoffman, a Jesuit priest, was instrumental in bringing out the landmark legislation, the Chotanagpur Tenancy Act of 1908, to protect tribal land. Fr. Hoffman’s 12-volume magnum opus, Encyclopaedia Mundarica, collated and protected the rich tribal culture and practices. Another Belgian missionary, Fr. Camille Bulcke, prepared the dictionary, grammar, and Bible translation into Hindi, which are still in use. Together with these stalwarts there are many other missionaries, both from abroad and indigenous groups, who gradually built up a heritage of active involvement. Fr. Stan Swamy continued this commitment to justice with unique zeal and dedication.

Q 6. The arrest of Fr. Stan Swamy has evoked protests from several quarters. How do you respond to the allegation that the Church’s response had been lukewarm in this regard?

Ans - I think we need to evaluate the allegation by looking at the whole incident from the day he was arrested on October 8, 2020 to the day of his sad demise. No one ever imagined that he would die on July 5, 2021, though the octogenarian had various health complications, and the worse of it came in the form of COVID-19.

The NIA and the judges had been inhumane and cruel in the treatment of the 84-year-old Jesuit suffering from various health issues. There was an unjustifiable delay in every legal procedure. He had to wait 20 long days just to get a permission to use a sipper to drink any liquid. Repeated attempts to obtain a bail were never heeded. He died as an accused. Up until his death, the false implications had not been proven. The triumphant truth never clarified his innocence. There has been an absolute negation of justice. It is a tragedy of the Indian legal system that he died in prison. It is the failure of our legislature procedure. It is a major tragedy.

Soon after the arrest there were protests and appeals from various corners. Many took a stand for Stan. Systematic legal procedures were followed. The top officials of the Church met the Prime Minister of India and appealed. Somehow all the efforts never bore any fruits. Stan Swamy left this world without seeing the light of justice. We should have put up a better fight. The newspaper headline is relevant: “Father, forgive us not!”

Q 7. There seems to be an effort to divide Catholic priests into two streams – one supporting Marxist ideology and other who are moderates with conservative ideology following the status quo. What is your take on this?

Ans - The most important thing is to be touched and transformed by Christ. St. Paul proclaimed, “It is no longer I who live, but it is Christ who lives in me”. The same apostle wrote, “Alive or dead, we belong to the Lord!” Once you are of Christ, there are no two streams, but the same Lord and His work for justice and truth.

Q 8. There are people who say that the involvement of a few Church personnel in the fight for the rights of tribals and Dalits is not a religious or spiritual one. Hence, they should desist from engaging in such activities. Do you agree with this view?

Ans - The work for justice is an integral part of the life and commitment of any disciple of Christ. How can we distance ourselves from those whose rights have been denied, and call ourselves to belong to Christ?

Q 9. Do you think that the Church has to be more pro-active in the struggles for the rights of tribals, Dalits and others?

Ans - The Dalits and tribals have suffered the most in our country due to discriminations by a complex and unjust system. The Dalit Christians have been collectively working for decades to protest caste discrimination and denial of the constitutional reservation granted to SC/ST communities. The Constitutional Scheduled Caste order of 1950, paragraph 3, popularly known as the Presidential Order, restricted the Scheduled Caste status only to the Scheduled Castes professing Hinduism. The Dalit Christians and Dalit Muslims have been denied their rights for the last seven decades. This has been one of the longest struggles in Independent India. The Catholic Bishops’ Conference of India had brought out the Policy of Dalit Empowerment in 2017. But there has to be a concerted, pro-active approach from the entire Church in the struggle of the Dalits and tribals.

Q 10. Is it not a fact that the Church has become more ‘institution-oriented’ than ‘people-oriented’?

Ans - The real intention of the Church to begin the institutions is often to support the people. But, once the institution grows and develops, the main concern becomes to maintain and protect it, and strive to make it grow further. In that process, the people and their needs are often forgotten, and all the attention is concentrated on the institution. This is a big danger. This danger happens often in the Church today.