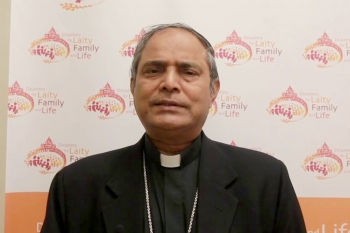 Ans - Two verses from St. Paul come to my mind: “There is neither Jew nor Greek, there is neither slave nor free, there is no male and female, for you are all one in Christ Jesus” (Gal.3:28) and “Here there is not Greek and Jew, circumcised and uncircumcised, barbarian, Scythian, slave and free but Christ is all and in all” (Col.3:11). These verses summarize well the Christian vision of inclusive society. We do not discriminate on the basis of caste, colour, creed or gender. We respect all religions, faiths and cultures. The word Catholic means universal. We do not exclude anyone. In fact, we work towards unity, harmony and inclusive society through ecumenical and inter-religious dialogue and empowerment of girls, women, Dalits, Tribals and backward classes. We are fratelli tutti, all brothers and sisters.

Ans - Yes, Christians are inherently charitable. We are brought up in a culture of caring, sharing and giving. The example par excellence whom we follow is none other than Lord Jesus Christ, who went around doing good: healing the sick, casting out demons, cleansing lepers, feeding the poor, forgiving sinners, restoring dignity to women, comforting the downtrodden, even raising the dead.  He washed the feet of his disciples and asked them to do likewise. He gave us the parable of the Good Samaritan and asked us to “Go and do like-wise”. As Christians we cannot but imitate him. Otherwise we cease to be Christian.

When we help the poor, we do it for love of Christ, not for any selfish motive. St. Mother Teresa who dedicated her entire life and founded Missionaries of Charity to take care of the poorest of the poor said she saw the face of Jesus Christ in the poor and destitute when she took care of them. Christ said: “Truly I say to you, whatever you did to one of the least of these brothers, you did it to me” (Mt.25:40).

Unfortunately, there is lot of misunderstanding and even false propaganda saying that our charitable works or social works are done with motives of conversion. It is absolutely wrong. If it was true that we convert people with force, coercion and allurement, half the country should have been Christian by now. In fact, our numbers are coming down. From 3% we are down to 2.3%. Given the number of schools and colleges, hospitals and dispensaries, homes for the aged and orphanages we run, and the vast majority of our students, teachers, employees and inmates being Hindus and Muslims, we rarely even hear of anyone of them becoming a Christian. It’s a slanderous propaganda by Hindu fundamentalists.

Ans - No. Not at all. The Church is politically neutral. It does not get itself involved in party politics nor does it support any particular party or ideology. All such ideologies and movements like leftist/rightist, Marxist, capitalist, socialist, Maoist etc. are opposed to the teaching and doctrine of the Church which is based on the dignity of the human person, whose origin and destiny is God. Church’s social doctrine represents a third way, which is neither Capitalist nor Socialist/Marxist. It stands for the dignity of every human person and for the common good and defends and promotes them.

Ans - In every society, and ours is no exception, there are unfortunate and sinful situations of injustice, violence, corruption, maladministration, discrimination, oppression etc. The Church cannot be a mute spectator. The 1971 Synod of Bishops on Justice in the World affirmed emphatically: “Action on behalf of justice and participation in the transformation of the world fully appear to us as a constitutive dimension of preaching the Gospel.” In other words, there is no evangelization, no proclamation of Good News without at the same time action on behalf of justice, that is, peaceful and non-violent fight for human rights, for change in unjust systems of oppression, and working for empowerment of the weaker sections of the society. This way we contribute to nation-building apart from our invaluable contribution in education, health care and religious harmony. Government should, in fact, appreciate the huge contribution of the Christian community in the above areas, as it did recently by honoring Caritas India for its contribution to help the needy during this pandemic.

Ans - Well, the Church is doing quite a lot for Tribal and Dalit rights and for the empowerment of the weaker sections in general. However, given the volume of human right violations, and huge percentage of people who are poor and marginalized, what we do is certainly not enough. It is true that by and large the Church tries to play it safe and wants to avoid open confrontation with the government and also does not want to risk the lives and properties of its personnel. Sometimes, the real fear is for the activities of one person, the entire organization could be targeted. Many NGOs have suffered like that. It is a delicate matter. On the one hand we want to fight for justice, human rights etc. On the other we need to be prudent and protect our lives and properties of the organizations, say Diocese or Religious Congregation.

Ans - Fr. Stan Swamy’s work among the Tribals and Dalits was known to only a few before his arrest. His arrest indeed evoked protests from several quarters, especially by human right activists, not just Christians but all sections of the society even international bodies. Of course, the Jesuits, with the help of lawyers, tried their best to get him bail but to no avail. There were peaceful protest rallies in different parts of the country by priests, nuns, and lay faithful and like-minded people. Media also gave fairly good coverage of the inhuman way he was dealt with by prison authorities, police and the judiciary.  The three Cardinals who met the Prime Minister some time ago requested him to intervene; that too did not work. So, it was not really lukewarm. But given the circumstances, and the draconian law which the State was using, all were helpless.

Ans - It is not right to put priests into these two straight jackets. In my opinion there is hardly any priest in India following or supporting Marxist ideology. The fact that they work for human rights, or Tribal or Dalit rights does not mean they are Marxist or Maoist. Often innocent people are targeted. Basically, there is a lobby of corporates, land mafia etc. in collusion with the government who brand people as Marxist or Maoist and slap sedition charges with draconian UAPA, so that they can achieve their nefarious goals. Of course, most of the priests are happy to maintain status quo. They are content with managing things without being proactive in their ministry. We ought to be, as Pope Francis reminds us, not Administrators but Pastors with smell of the sheep and go out to the peripheries, be on the streets, not just sit in the office as bureaucrats.

Ans - I feel that the fight for human rights, action on behalf of justice, empowerment of the weaker sections of the society must go on. Just because there are difficulties and hardships, even persecutions, we cannot give up this struggle. It is an essential part of the preaching of the Gospel as the Synod of 1971 as well as the Social doctrine of the Church teaches us. The only requirement is that it has to be peaceful and no recourse to violence will be justified.

Ans - Yes. There is so much to be done. What we are doing, which is quite a lot, is still not enough. Church has to be more pro-active in the struggles for the rights of Tribals and Dalits and the poor and marginalized in the society. More priests, nuns and lay people should dedicate themselves to this noble cause.

Ans - I fully agree with you. It is evident from the number of priests and nuns involved in running institutions like schools, colleges, hospitals, training centers etc. Regrettably pastoral and evangelical works are often neglected or not given sufficient importance. More and more Institutions are created and now we need personnel to administer them. Without Institutions also we cannot serve and survive. There must be a happy balance. Priority should always be for pastoral, evangelical works and for building human communities rather than putting up huge structures. Even if we have to run institutions, we can still be people-oriented.