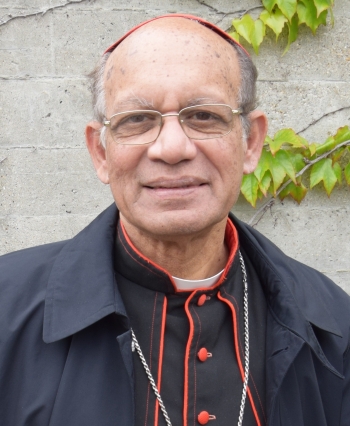 Ans - A Christian vision of society is inclusive. Our Lord built no barriers or walls.  He came to make all of us members of one family, children of our Heavenly Father.  Pope Francis feels this intensely and has often spoken about it.
No one can be excluded in a Christian vision of society: Not the poor, not the uneducated, not those on the periphery.  We see much of exclusion all over the world.  In India, much of this is based on caste. In some countries it is based on ethnic origin; in some societies women are excluded. In other societies, minorities and migrants are discriminated against.  The Church persistently makes efforts to include everyone.

Ans - Christians should be by nature charitable, following the teachings of Jesus (Mathew 25: 21-46). Jesus was a man for others and as disciples we have to be like Him.  Hence, reaching out to those in need is essential to Christianity.
The Christian way of serving the poor is to reach out to them in any crisis situation. Immediate help needs to be given. But for a long-term solution, there needs to be empowerment and capacity building of the affected so that they are able to stand on their own feet and they in turn are able to help others. This has got nothing to do with Religious Conversion. If people are attracted to the person of Jesus and want to become his disciple, I am happy, but one should never use assistance to people who are in need, as a factor for wanting them to follow Jesus.

The issue of conversion is often hurled at the Church. It should be clear that we are not in any numbers game.  We are 1.8% of the population in India and over the years we have gone down in percentage. We are not at all attempting to increase our influence or power by having more numbers. We try to make the Gospel values present in Society: unity, justice, peace, concern for the poor and needy etc. This is because of our love for the country and its people – our fellow citizens.

Ans - The Church is much involved in nation-building. In all our recent CBCI meetings, we have discussed what the Church can do for a better India.  We have taken different aspects of this in each Plenary Assembly.

Gospel values are our Creed. We would not be fully with any Government because there may be elements which may not be consistent with Gospel teachings. The Church works very actively for justice and peace. The Social Teachings of the Church provide guidelines for this. St Paul VI in his document “Social Teachings, A Call to Action” states that the responsibility of the Christian Community is to:

Ans - I know an impression is sometimes given that the Church has not given enough support to activities of priests like Fr Stan Swamy in their fight for Tribals and Dalits.  This is not true.  First of all, the Church is not just the hierarchy but all the People of God. Further, different people are called to different ways of preaching the Gospels.  Every Religious Institution tries to respond to the needs of the times according to its charism, and in the Institution, every individual is called to serve God and the Community in different ways: some with pastoral activities, others in education, others in social justice issues, some in peace-building and others in relief activity.

As far as the Tribals and Dalits are concerned, I personally feel very passionate about the oppression of certain sections of our people.  I began my priestly Ministry in Jamshedpur then, Bihar, now Jharkhand. Outside the town we had a large number of Tribals. I saw at first hand their simplicity, their faith, their innocence, and also I saw how they were being exploited.  There was no one to give them hope. The Jesuits who were a majority among the priests in the Diocese at that time, concentrated a lot on the work among the Tribals.  This is how Fr Stan Swamy got involved.  Similarly, the Dalits.  I have often told them that I am 100% with them. We cannot have them exploited.  It is our Christian duty to reach out to help them in every way.  The Church is making efforts in this.  Perhaps we can do even more. The CBCI has a Commission for Tribals and one for Scheduled Castes. Besides we have a Dalit policy.

Ans - There have been protests against Fr Stan Swamy’s arrest, his incarceration and his treatment in Jail.  It might appear that the Indian Church has been lukewarm.  I knew Stan from my Jamshedpur days, since we stayed in the same Jesuit Community years back. I felt that the Jesuits had rightly taken the lead and the CBCI did not want to interfere so as to help the Jesuits be more effective. I assured them I am fully backing them.  I think the Jesuits did a very good job by conscientising people of the reality. Probably even better than we could have done.  They continue to take the lead in this and I have been assuring them of my full support. I informed all the bishops about the July 28th programme, and also invited the NCCI and EFI to join in.

Ans - Priests are called to be leaders of society in the triple role of our Lord’s priesthood: as priest, prophet and leader. We are called in different ways to fulfill this call depending on our formation background, education, and other factors. I think it is simplistic to divide priests as either Marxists or Conservatives.  We have got to continuously answer the needs of the time.  Personal discipleship of the Lord is important.  Discern what the Lord wants of me now? And this has got to be continuously updated.

Ans - I would not agree that the involvement of Church personnel in the rights of Tribals and Dalits is not a spiritual activity.  I have explained above that it is a Human Rights issue, a Justice issue, a Gospel issue. Fr Stan Swamy has certainly redefined the meaning of the priesthood and there are many like him who are continuously doing so.  It is undoubtedly an authentic charism and an authentic calling.

Ans - We have got to answer the needs of the times.  I do feel that the issue of care for Tribals and Dalits has got to be taken up.  But I have always maintained we must deal with this from a long-term perspective, beginning with education, capacity building, confidence-building. One cannot expect sudden results and transformation of society without changing the mentality of people, while also empowering the Tribals and Dalits.  Both have to go hand-in-hand.

Ans -The Church needs institutions and the Church needs to be people-oriented.  I would not separate the two.  Mother Teresa was very people-oriented.  But she realised that to carry on her work she had to have an institution so she was institutional as well and cared for the Missionaries of Charity fiercely.  One must keep the balance.  In everything our Lord is the model.  One has to discern, one has to pray, one has to open one’s mind and heart to what the Spirit says.  If we have made mistakes, we should correct them. If we are clear of what the Lord wants of us, we should go that way even if it is unpopular.