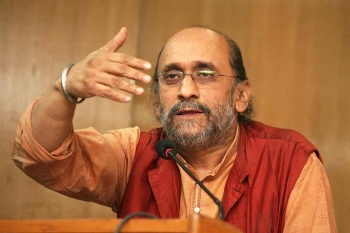 Surveillance by an international agency is anti-national and a threat to democracy, said Paranjay Guha Thakurta, senior journalist, author and film-maker, whose name figures in the recent Pegasus espionage list, while speaking to Manoj Varghese of Indian Currents. He has been vocal in raising the issue at different platforms and has strongly condemned the Income Tax raids on selective media houses.

Q. When did you come to know that you are under surveillance?

A. One Sandhya Ravishankar from Chennai, who exposed several sand mining mafias, had approached me in the month of March this year hinting that as a part of larger conspiracy my phone is being taped. Later, two journalists from Forbiden Stories (Paris), Phineas Rueckert and his editor Sandrine Riguad, approached confirming about the spying. They requested to surrender my mobile phone for downloading the stuff and to send in for a forensic analysis. In the public interest, and for my own curiosity, I gave my phone to them, without knowing the wider story behind. And they shared that the phone has been on surveillance, especially from March to May 2018. That was the time I was doing a story on the foreign assets in tax havens of Dhirubhai Ambani and compiling stories for my book titled ‘The Real Face of Facebook in India’.

O. Do you see it as an International conspiracy to break the news on the eve of Parliament session?

A. How can it be an International conspiracy when almost 45 countries are involved with 180 journalists’ world over? How can be the timing in synch with the beginning of the Indian Parliament session? There can be only three possibilities: Either the Government legally engaged the espionage, or allowed it to be done illegally or it was done unlawfully without the Government’s knowledge. For any such spying, a formal permission is required by the Home Ministry as per the Indian Telegraph Act.

Q. Do you consider it as a reward for your fearless journalism or as a threat for your profession?

A. After the exposure, I have responded to over 30 interviews; many have congratulated and at the same time several of my friends have advised me to be careful. In my 44 years of journalism, for the first time, I am worried about my trusted sources, which are at a high risk now. I fear losing them out. I am happy to be one amongst the 40 Indian Journalists who do fair journalism. It requires special guts at a time when the general media is engaged in Public Relations (PR) and in the mode of advertisement agency. None of us are terrorists, drug peddlers or are anti-nationals.

Q. What’s new, the phone tapping was going on earlier too?

A. I agree, earlier too, the phone taping was in practice, but at random, by the Intelligence department in the interest of the country. Several cases were exposed in the past like that of Niira Radia – fixing of portfolios for the ministers; former Karnataka Chief Minister R K Hegde – who resigned on the allegations of phone tapping; Sachin Pilot – against its own Rajasthan Government; and several others. But, with a revengeful approach it never happened before at this level.

Q. What is anticipated next on the part of the Govt?

A. The France Govt has initiated an enquiry, so is the Israel Govt looking into the matter with NSO. If the Govt is not involved, it should initiate an enquiry against the NSO. The Govt has rejected the demand for a JPC (Joint Parliamentary Committee) probe. Many experts have opined for an independent enquiry by a group of credible experts. The Supreme Court may take into cognizance, owing to the internal security and public interest in mind, and may initiate an enquiry. Individuals may also file in defamation cases.

Q. What does the figuring of a few Cabinet Ministers indicate?

A. Only the perpetrators would know that, and the intentions behind. The scale of spying and technology has gone up manifold and is beyond a common man’s imagination. The journalists who have been asking tough questions are facing the brunt. An individual cannot afford to engage NSO, only a Government or a law enforcing agency can carry out such operation paying millions of dollars. All in the name of national interest and with the tax payer’s money!