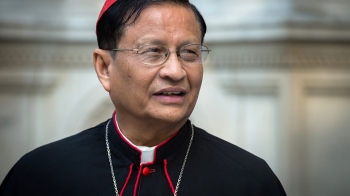 Jubilee Assembly of the FABC: To ‘Renew and Revitalize’; Let Not Such Labour be in Vain!

The bishops gathered in Bangkok for FABC jubilee celebrations are spending a considerable time together from 12 – 30 October. So then, we could reasonably expect some substantial results from their deliberations. Time-constraint cannot be here an excuse.
Cultural performances, receptions, and bonhomie among the bishops are important to create an atmosphere for joint reflection on the future of the Church in Asia. Hopefully, their prolonged stay in Bangkok will not be the mountain in travail bringing forth a mouse. Will the bishops bring forth something more than worn-out pious platitudes and many a déjà vu?

Our hope from the FABC meeting also raises certain concerns that the bishops need to address so that they do not belie the expectations of the people of God in this continent.

Today for an effective and meaningful pastoral practice, it is absolutely necessary to respond by considering the geopolitical situations in Asia. What is called for is not simply reporting on what is happening in different countries – information readily available on Google, but the response by taking a stand. Obviously, the situations are different. However, that need not be a reason to abdicate the shared responsibility as Asian leaders to jointly address some of the converging critical socio-political issues and developments. These cannot be simply relegated to National Conferences.

In most countries, the political situation is precarious and volatile, raising many serious issues for pastoral practice, mission and engagement of the Church. The evolving situation needs to be addressed by the FABC, which will inspire the people of God and provide orientation and direction for the future.

Will the bishops prove themselves to be courageous leaders of their flock in critical times or behave like spineless and evasive ones? An Asian cardinal – the 90-year-old Cardinal Joseph Zen of Hong Kong - a longtime advocate of democracy and human rights and the “conscience of Hong Kong” - was arrested and brought to trial by the Chinese totalitarian regime of the Communist Party.

Will the FABC conveniently ignore this, and the bishops disperse from Bangkok without a word on such developments? Who will believe if the bishops claim any commitment to democracy and the dignity of human persons in Asia? Would they ever address the issues of migrants, refugees, and the war/custodial crimes of the repressive states? Would they wake up conscience of the nation states to respond immediately and decisively to the ecological crisis that has devastated the lives of millions of people, especially the poor of Asia?

A mega event like the one in Bangkok and the deliberations there should have repercussions at the local level in everyday life. As often happens, when an Episcopal Body is as large as the FABC, we note a lot of openness on the part of the bishops, and it shrinks at the level of National Conferences. It gets narrowed down at Provincial and Diocesan levels. Unfortunately, as of now, there is no juridical mechanism to make the implementation of FABC’s deliberations mandatory. But we do need it.   Otherwise, we could only go on relying on the moral responsibility of the leaders to put into practice the vision and pastoral proposals of this Continental Body.  Will the bishops bind themselves to practice in their dioceses what they will declare in Bangkok?  Will this much required development happen?

The seriousness of translating the vision of the FABC will depend upon what it will have to say on Synodality in the Asian Churches. This should figure as a major issue and a source and point of reference for the renewal of the Churches in this continent. The reflection should bear upon the common responsibility of the people of God and their shared participation in the life and mission of the Church, which would naturally bring in the question of the current mode of the exercise of authority in the Asian Church, and to the extent, the Christian faithful are allowed to share in the three functions of Christ (teaching, sanctifying, and governing), especially in the function of governing. What will the FABC do to turn the Asian Churches into truly Synodal Ones? Could we expect some response from Bangkok Jubilee Assembly?

Then there is the question of the bishops' freedom to speak their minds frankly and earnestly. The presence of Roman Curial officials and nuncios is often justified on the ground that such Continental Meetings offer the opportunity for them to learn more about Asia and familiarize themselves with the situation. Often the border-line between learning and control is thin!  For, an excessive concentration of these representatives could also inhibit the bishops and their freedom. This is all the more so, given a misunderstood Asian trait of deference and obsequiousness to authorities and the colonial heritage of meekly acting in accord with the expectations of higher-ups.

This is what happened at the FABC Plenary Assembly of Bandung (1990), which marked the beginning of a clouding moment and overcautious phase in the FABC and its working. With the fresh wind of Pope Francis blowing in the Church, we could hope that the FABC will find encouragement and staunch support in these representatives for its vision and pastoral involvement. How likely is this to happen?

That brings me to the next issue. Asia is a continent of youth brimming with life and energy. This contrasts with the gerontocracy – the rule of the old – in the FABC. Several leaders are on the verge of retirement – some within days and months – waiting to go for rest in the evening of their life and smoke their pipes in tranquility, perhaps!  Many of them will not be attending the next Plenary Assembly of the FABC. Maybe some of them have already delivered their swansongs; if not, they will do so during the current Jubilee Assembly.

It is important for the future of the Asian Church that the baton of leadership is passed on to a new generation of younger people, which should happen without delay. Changing over to young leadership to revitalize the FABC is required at all levels, including the chairmanship of various Offices.  How will the FABC respond to this urgent and vital concern in this continent of the young?

Yet another critical question that the Plenary Assembly in Bangkok should grapple with is clerical sexual abuse. There is a tendency to consider it a western issue and claim that our situation in Asia is different. Then there is the argument that in Asian culture, we do not discuss such scandalous matters in the open. These, I think, are convenient excuses. The wounds must be opened if they are to be healed. There are an increasing number of instances in different countries of Asia of clerical sexual abuse and growing  allegations by the victims against perpetrators as well as the authorities who try to cover up. Denying this uncomfortable  fact  would be like the proverbial ostrich that buries its head in the sand and believes that the world does not exist. It is a boiling issue in Asia, and no lid can stop it.

If we follow the Social Teachings of the Church, there is the question of human rights violations in these instances, which the leaders are bound to respond to. Moreover, there is the question of the credibility of the Church, its mission and its engagement. What will have the Bangkok Assembly of the FABC to say on this increasing clerical sexual abuse in the Asian Churches?

Without addressing such momentous questions, the FABC Assembly could come across even to well-meaning people as “all sound and fury”…We will continue to pray that the Jubilee Assembly be filled with God's blessings and the inspiration of the Spirit and that it will bear abundant fruits. Let us also hope that the expectations of the people of God in Asia will not belied and that the great efforts to prepare and conduct such a mega event will have much bearing for life of abundance in Asia. To quote from the medieval Dies Irae of Friar Thomas Celano – tantus labor non sit cassus – let not so much labour be in vain!