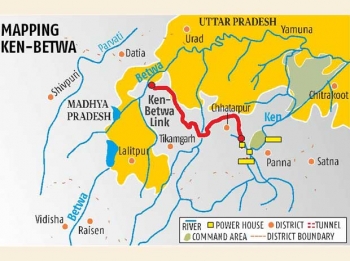 The memorandum of understanding for the Ken-Betwa Link Project (KBLP) signed in March 2021 among the Union Jal Sakti Ministry, the Governments of Madhya Pradesh and Uttar Pradesh through video conference in the virtual presence of Prime Minister Narendra Modi has been done without resolving serious environmental, legal and economic objections to the project.

The primary objective of the mega project, which according to 2017-18 estimates is expected to cost Rs. 38,000 crores, is to take the ‘surplus’ water in the Ken river to  Betwa. To start with, the KBLP is based on a faulty premise that Ken, the smaller of the two rivers, has surplus water. The hydrological aspects of the Ken-Betwa link has never been scientifically examined according to Himanshu Thakkar of the South Asia Network on Dams, Rivers and People.

“The water balance studies that is at the basis of the KBLP is problematic for many reasons,” according to Professor V. Subramanian, Emeritus Fellow, School of Environmental Sciences, Jawaharlal Nehru University. In his book Rivers of South Asia: To Link or Not to Link,  Subramanian says that the most fundamental problem with the water balance study is that it does not take into account groundwater potential and use in the relevant basins.

Moreover, the water balance study does not look at rainwater as a resource and potential of rainwater harvesting before deciding if there is really any deficit or surplus. Another fundamental issue seems to be non-allocation for the environment flow requirements in the river downstream from the six proposed dams.

The irrigation benefits projected from the proposed KBLP seem highly unlikely, according to Subramanian. The fact that utilisation of rainwater and ground water in the Ken-Betwa basin is so low shows that water balance studies are really not factual in KBL.
Moreover, if we look at the water allocation and area to be irrigated in KBLP, we find that water allocation is 5189 to 5275 cubic m for every ha to be irrigated .This number deviates from standard agricultural practices.

The impact the submergence will have on the Panna National Tiger Reserve (PNTR) will be numerous and serious. The Ken river which flows from south to north, is home to Gharial and Mugger, and other aquatic fauna and is one of the least polluted rivers. It is one of the 16 perennial rivers of Madhya Pradesh and is truly the lifeline of the Reserve. Ken offers some of the most spectacular scenery to the visitor while it meanders for some 55 kilometres through the reserve.

When Great Gangau Dam comes up, the reservoir will not only submerge significant part of PNTR, it will also make approach of wildlife to the only perennial water source impossible due to the silt that gets deposited on the periphery of the reservoir. Moreover, the Ken Gharial Sanctuary, located downstream of the proposed KBLP is likely to be affected due to stoppage of freshwater flow in the river.

The proposed link canal would submerge thousands of hectares of cultivable land at Chhatarpur, Tikamgarh and Jhansi. Gangau and Bariyarpur dams are situated downstream of the proposed dam. The irrigated area from both projects could get seriously affected due to the proposed link. Thousands of hectares of cultivable land would be taken for canals in Chhatarpur and Tikamgarh. People from scores of villages near Dhaudhan would be displaced due to the proposed dam. A major part of the Panna National Tiger Reserve would also be submerged due to the reservoir.

The Gangau dam is the feeder dam for Bariyarpur weir that will receive no water from the Ken river during non-monsoon months. Even in monsoon, while the Greater Gangau Dam will be filling, there will be no water either for the Gangau dam or the Bariyarpur weir and its command areas. Hence Gangau and Bariyarpur reservoir may become dry for most of the year if all the water in the Ken river is stored in the Great Gangau Dam and is diverted to Betwa basin.

Also destruction of over 3750 hectares of rich forest due to the Gangau Dam will have serious adverse impact on the environment. This will mean loss of wildlife and all the biodiversity, loss of whole system of rain water absorbing ecology and  subsequent increase in water flow in the monsoon and decrease in the water availability in non-monsoon months, shrinkage of resource base of surrounding population and of living space for wildlife.

Further, the total quantum of displacement due to submergence is not known  either to prepare any just rehabilitation and resettlement plan or take their free, prior and informed consent about the project or any of the options of irrigation needs of the region. Also the people already displaced by the dams in Ken and Betwa basins are yet to be fully and justly settled. Unless that is achieved any further displacement in the basin cannot be considered as recommended by the World Commission on Dams.

The Centre pushed the KBLP down the throat of UP and MP in spite of the existence of serious differences between the States regarding sharing of water of the two rivers. The fact that under the Constitution water, like agriculture, is a state subject, but this aspect did not seem very important to the NDA government while dictating the MoU. It remains to be seen whether the States will abide by the MoU once the project moves from the drawing board to the ground. The future of the project will also depend on how the affected people who have not been consulted or taken into confidence about the implications of the project will react once construction begins.

The MoU was signed in spite of the fact that the Supreme Court and the National Green Tribunal are hearing separate petitions challenging the environment clearance given by the Ministry of Environment and Forests to the project.  The reports of both the Forest Advisory Committee (FAC) and the Supreme Court-appointed Central Empowered Committee (CEC) have warned that the project in its present form will only result in environmental destruction of the region it is proposed to develop.