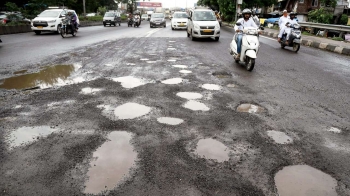 Last week Dhavani, a class 2 student, in her efforts to draw the attention of Karnataka Chief Minister of the pathetic condition of Bengaluru roads, made a video appeal. She said "Please get these potholes fixed. They have become death traps. Many people are losing lives. Their families are orphaned. Who will take care of their families?" The 7-year-old even offered her pocket money for filling up the potholes.

Similar to Dhavani, public spirited S Doreswamy, a Police Sub Inspector has spent Rs 3 lakh from his personal savings to repair potholes on a five-km stretch of road in Mysuru.

For the last 11 years, socially concerned Gangadhar Tilak Katnam, a 73-year-old retired engineer, has been spending his pension to repair over 2000 potholes on Hyderabad’s roads assisted by his 64-year-old wife. Taking cognisance of media reports, recently a Division Bench of the Telangana High Court took a serious view and asked the Greater Hyderabad Municipal Corporation what its officials were doing when the retired couple was doing their job. It wondered whether it would be appropriate if the salaries of the officials concerned were paid to the couple.

On Vijayadashami, this 15 October, many citizens in Bengaluru reportedly performed “pothole pooja” to protest against pothole-ridden roads across the city. A 3X3 pothole was embellished with flowers, smeared with vermillion, a pumpkin broken and aarti performed with prayers to the pothole not to harm anyone.

The Karnataka High Court has given two deadlines to the authorities to fill up the potholes on Bengaluru roads. Compliance is expected soon after the monsoon gets over.

In early September, the death of a physically challenged senior citizen in Bengaluru, who was trying to navigate a pothole at night on a poorly lit road, generated sharp reactions from several quarters. The deceased failed to notice the trench from a certain distance and when he applied sudden brakes, he lost balance. Some local residents who found him lying unconscious immediately rushed him to a nearby hospital but the doctors declared him brought dead.

Preliminary investigation had revealed that the road dug for laying a pipeline a few months ago was not asphalted but callously filled with mud. While the Municipal Corporation pointed fingers at the Bangalore Development Authority, the latter was quick to blame the Sewerage Board for laying a water pipeline, which was refuted.

So, nobody seems to be responsible for the pothole accident.

There are many such heart rendering pothole accidents reported regularly across our cities. On an average, potholes claim about 10 lives daily but there could be many more unreported, including those injured. According to official statistics, 3,564 road accidents took place across India due to potholes in 2020 compared to 4,775 and 4,869 respectively during 2019 and 2018.

That during the period 2013 to 2017 about 14936 deaths took place due to potholes on roads depicts the symptoms of a deeper malaise. The Supreme Court, not long ago observed that “this is obviously a very high number and it indicates that the concerned authorities whether they are Municipal Corporations or State Governments or National Highway Authority of India or other such bodies or organizations are not maintaining roads effectively. It is not at all acceptable that such a large number of deaths take place due to potholes on roads”.

Truly, human lives are at stake especially during each monsoon as roads across the country seem to pose a threat due to potholes. It is not uncommon for a sudden a big bump to appear from nowhere on flooded roads.

Studies have shown that potholes are more than a bump on the road and fixing them cost money. But not fixing them costs even more money as they have many more far-reaching consequences. The Greater Hyderabad Municipal Corporation spent Rs 7,396 to fill each pothole in the city (as testified to the Telangana High Court). Brihanmumbai Municipal Corporation has spent over Rs 17,000 on every pothole that it repaired in the city and suburbs.

Notably, pothole filled roads means longer commuting times. This has been found to affect mental health by causing an increase in stress levels, sleep disturbances, fatigue and concentration problems among commuters, especially in drivers. Even in developed countries, thanks to potholes, the number of medical cases involving backaches, neck pain, cervical spine pain and skeletomuscular problems have shot up by almost 20 per cent. It increases fuel consumption, pollution levels, and higher wear and tear including frequent punctures, damaged suspensions, misaligned wheels etc.

Preventing potholes means roads need to be carefully laid using quality construction materials. They have to be effectively maintained thereafter and repaired immediately when potholes start forming. These days, concrete roads are preferred over conventional bitumen roads. Rough calculations indicate that a concrete road can cost Rs 7.8 crore per km compared to Rs 1.25 crore for a km of bitumen road. Although the initial investment for concrete roads is significant, they are said to have a life cycle of up to 30 years and work out to be cheaper in the long run as they will be pothole-free with no maintenance cost. Asphalt roads have shorter life and need patching up whenever potholes appear. White-topping the existing bitumen is another option that is being used in many of our cities.  As the white-topped road comes between the bitumen-topped road and cement concrete, its life cycle is as good as that of cement concrete road.

The Bruhat Bengaluru Mahanagara Palike had recently announced that victims of accidents caused by bad roads and potholes will be entitled to compensation of Rs 15,000 and Rs 3 lakh in case of death thereof.

There is an imperative need to fix responsibility for pothole-free roads as somebody has to be made responsible for pothole deaths.

Life is more precious to be lost over potholes.