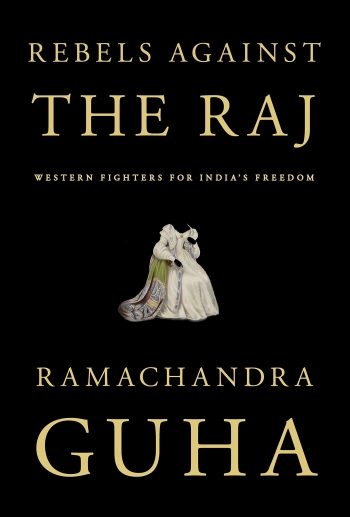 Lessons for the Disciples of Jesus

The latest book of well-known historian Ramachandra Guha is “Rebels Against the Raj: Western Fighters for India’s Freedom”. The book tells the story of seven foreign-born individuals who chose to struggle for the freedom of a country other than their own. “They exchanged their old homeland for their new one unreservedly, and unequivocally -- once in India, they knew they would almost certainly die in India”. When right-wing nationalists are clamouring to convert India into a Hindu Rashtra, these stories are a source of great inspiration to all those who aspire to make India an inclusive pluralistic nation.

Disciples of Jesus can learn a good number of lessons from the ‘Rebels Against the Raj’, especially from four of these illustrious women and men:

3) Ralph Richard Keithahn, another American and

All of them had the openness to learn about the people of India, their religion and culture, and they were able to identify themselves with Indians to a great extent. They participated in the freedom struggle and went to jail. On the contrary, many Christian missionaries who came to India from the West were prejudiced against Indian religions and cultures and they tried to impose their religion and culture on the people of India instead of sharing the vision and teaching of Jesus, being open to learn from the people.

The vision of Jesus, as depicted in the Gospels, is facilitating the reign of God or Kingdom of God. Reign of God is not a place but a situation in which God is accepted as a loving father or mother and all human beings are brothers and sisters with equal rights and opportunities.  The early Christian communities were the realization of the vision of Jesus. Mission of Jesus is bringing about individual and social transformation in view of the reign of God.

A disciple of Jesus is passionate to bring about individual and social transformation, following the teachings of Jesus in view of creating the Reign of God situation in the context in which he/she lives. As Jesus was always available to people, a disciple of Jesus is always available to people and is in the midst of people, sharing their joys and sorrows. A devotee of Jesus need not be with people; in fact, many devotees of Jesus live in their enclosures and comfort zones, often cut off from people. Often, they are unaware of what is happening to people.

Devotees of Jesus may not be able to learn much from the lives of the men and women about whom Ramachandra Guha has written in his book.  The most important lesson the disciples of Jesus can learn from the four foreigners is openness and readiness to learn from the people. They did not come with the prejudice that the people of India are ignorant and their religion is superstitious. They also did not claim that their religion and culture were far superior to those of the people of India.

For example, Samuel Stokes studied Upanishads and Puranas. In the words of Guha, “these studies, however, in no sense diminished his faith in Christ; rather the light from the Hindu scriptures had come to fill the gaps in Christianity as he had known it and to make it a connected whole”.   Stoke said of himself that ‘he came to teach and stayed to learn’.  As a result of studying about Hinduism he came to the conclusion that “Christianity and Hinduism need each other”. “When a divine synthesis has been affected a true Christian will be able to call himself a Hindu, and a true and perfect Hindu will be able to say, “I am a Christian”. Ralph Richard Keithahn visited the Sabarmati and Sevagram Ashram of Mahatma Gandhi, Santiniketan of Rabindranath Tagore and the ashram of Ramana Maharshi in Tamil Nadu to learn about Indian culture and religions.

While Mira Ben was in jail she read Upanishads, Quran and had planned to read Mahabharata. She also finished the year-long course in spiritual reading that Gandhi had laid out for her.

Second lesson one can learn from them is identification with the people of the area as far as possible. Samuel Stokes married a Christian woman of Rajput origin. He built his house in tune with the local culture and named it “Harmony Hall”. He and his children adopted the dress of the local people. Contrary to the behaviour of the British officers, he treated Indians as equals, as he strongly believed in equality of all people. He wrote, “No nationalism is worth straining for that does not stretch beyond the interests of one’s race so as to include the interests of all humanity”.

Madeleine Slade (Mira Ben) was fascinated by the personality of Gandhi and his work after reading a booklet titled Mahatma Gandhi written by Jean Jean-Christophe, Rolland. She wanted to be a partner in the mission of Gandhi. Even before coming to India, she prepared herself for the mission. She had given up drinking, and no longer ate meat of any kind. She learnt to spin and weave, as it was a practice in the ashram of Gandhiji.  She also wore an Indian dress.

Regarding the efforts of Keithahn to identify himself with the people of India, the Indian Express wrote the following on 30th August 1944. “The American had gone further than Andrews, in identifying himself with the common people of India. Latterly he had even begun to dress like an Indian peasant and eat only such simple food as obtainable in the village itself”.

The examples of Samuel Stokes and Mira Ben are challenges to the contemporary missionaries in India. What extent are they ready to identify themselves with the people with whom they live and work? Genuine mission requires incarnation into the culture of the people, as Jesus became one among the Jewish people.

The third lesson is acquiring mastery in the language of the people. Stokes acquired mastery in Hindi and in the local pahari language, and as a result he could effectively communicate with people. He taught his children only Hindi and pahari. Mahatma Gandhi’s remark about Stokes is very pertinent. “He has not, this day taught his children a single word of English. They only know two languages -- Pahadi and Hindi. He too threw his clothes into the sacrificial fire on July 31 and now dresses himself in a dhoti, shirt and cap, all made of khadi.”

As a preparation to join the mission of Gandhi, Mira Ben leant Hindi and read books on India and its culture. After coming to India, she continued her efforts to gain mastery in Hindi. Sarala spoke and wrote Hindi like a native. She also picked up the local dialect, Kumaoni while she worked among women in Uttarakhand.

Without being proficient in the local/regional language missionaries will not be able to influence people among whom they work, and their mission also will not be effective.

The fourth lesson is responding to the needs of the people, especially fighting against injustice and exploitation, if the mission is to be successful. Samuel Stokes found the people of the villages surrounding Simla were subjected to an exploitative practice called begar.

During the summer the high officials of the Raj took their families on the treks and tours, forcing the villagers to carry their loads and supply stuff for their meals too. Meagre wages were paid for these services; and sometimes nothing at all. Stokes decided to stop this practice. He submitted applications alone and with the signature of hundreds of villagers to the high officials like commissioner, besides going to the public by writing articles in renowned publications like Young India.

Mira Ben accompanied Gandhi in his travels to different parts of the country to mobilize people in the struggle for independence of India and in this process she often became sick. For supporting Gandhi, Mira was arrested and sentenced to three months in prison, Bombay’s Arthur Road Jail. Again, she was arrested and had to remain in jail for about a year. She undertook an intensive tour to the UK and the USA to promote the cause of India’s freedom.  Within two weeks in the United States, Mira addressed twenty-two gatherings and gave five radio broadcasts. She addressed sixty-seven meetings in the United Kingdom. She took up the cause of the people of India and left no stone unturned in achieving the goal.

Besides establishing Kasturba Mahila Utthan Mandal and Lakshmi Ashram at Kausani in Uttarakhand for the empowerment of women and girls, Sarala Behn travelled on foot for ten years in many parts of India for creating awareness among women. She also spent one year in the dacoit-infested areas of Chambal Valley and Morena, working for a transformation in the dacoits and motivating them to surrender themselves.

The contemporary missionaries have to ask themselves whether they have the courage and determination to take up the cause of people among whom they live and work. Stan Swami fought against the exploitation and oppression of the Adivasis of Jharkhand and supported them to access their rights, especially rights related to jal, jungle, jameen? How many missionaries have the guts to follow the footsteps of Stan Swami?

In short, what the disciples of Jesus (missionaries) can learn from the four foreigners, who had identified themselves with the people of India, is that mission is with the people and for the people. Institutions started for facilitating the mission can in course of time become obstacles to the mission, if the persons who manage the institutions are not people-oriented and people are not at their heart. In such situations institutions can become ends in themselves and people could be used to perpetuate institutions. In such a situation the mission is bound to fail.