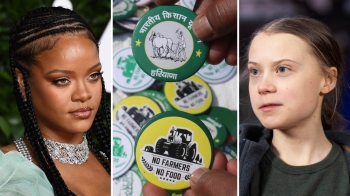 Lessons to be Learnt : 100 Days of Farmers’ Movement

The Farmers’ agitation on the Delhi borders reached 100 days on 6th March. In a movement where millions of people are involved, it is not an easy task to steer, streamline and strengthen it. But the farmers, their leaders, the civil society, students, youth and all those who are involved in it have shown great grit and dignity to carry it forward against a regime that indulges in naming, shaming, and blaming.

Every common person and conscious citizen, as well as committed political analysts, would reiterate the fact that in the past one decade, constitutional values, policies and programmes for the marginalised and vulnerable have been relegated to the background.

Vengeance and vindictiveness of the government have shrunk the space for agitation and protest. Then erupted the protest against CAA coordinated by various sections of the society. This opened up avenues for resistance to all sinister moves of the present regime.

Ismat Ara, writing in The Wire, in her article “Indiscriminate Arrests Show That the State Is Scared: Nodeep Kaur” highlighted the issue haunting the country under a fascist, autocratic, authoritarian, undemocratic and scared government. Nodeep Kaur, a Dalit and Labour Activist, speaking at a press conference after her release on bail said that those who raised their voice were being booked under stringent laws.

She said, “Just because I am out of jail, doesn’t mean our fight is over. Our demands are still unmet, we Dalit workers still go to sleep hungry.” Further, commenting on the new labour laws that were passed soon after the three farm laws, she said that organising a workers’ union or protesting and demanding fair wages can never be unlawful.

She pointed out the ‘divide and rule’ policy of the present government.  “The government benefits from dividing us into Hindus, Muslims and Sikhs. They say that Hindus are in danger because of Muslims. But when you go to the ground, a common person wants only some food and shelter. Nobody cares about creating a separate state. They just want to fill their stomach before they go to sleep,” she said, referring to the government and BJP leaders’ attempts to claim that the farmers’ protest is being led by “Khalistanis” and “terrorists”.

This fact needs to be pointed out to the andhabhakts (blind followers) of the BJP and the RSS affiliates that while the government makes all efforts to divide the people in the name of religion, region, caste, class, language, haves, havenots, deshbhakts, deshdrohis’, Hindustanis, Pakistanis etc. they are doing this not to save the country but to sell this land to corporates and enjoy the alleged kickbacks they get from it.

Against this evil plan, the farmers’ movement has raised its voice and has relentlessly fought for the last 100 days and is ready to fight till the end. As reported, farmers’ unions under the Samyukt Kisan Morcha banner and many trade unions have agreed to carry out a joint campaign, combining their demands and planning common actions. This decision was taken at a recent meeting of the representatives from both sides.

Speaking about the outcome of the joint meeting, All India Kisan Sabha treasurer Krishnaprasad, said, “This is a politically significant meeting at this juncture. Even those who joined the agitation on the farm laws are recognising that this is part of a wider reform package, as the government is openly saying. So we must also fight it together,” he added.

It is significant to note that the ruling party has betrayed the ‘annadata’ (food provider) and labelled them ‘aandolanjivi’ (agitating beings).

On the other hand, the opposition parties, clueless and frightened of being subjected to income scrutiny, are keeping quiet. At the present depressing political scenario, it is the farmers, students, youth, civil and secular organisations who are forging alliances to resist every divisive and disruptive move of the government. It is pertinent to note that this struggle has become a national movement to re-establish an inclusive and egalitarian Indian polity, economy, culture and society.

Langars (Free food service) teach lessons to those who are trying to divide the people. Scores of langars and makeshift kitchens have come up at the farmers’ protest sites. These langars work round-the-clock and provide free food without distinction of caste, class, or religion. Along with langars, a makeshift school has been set up at one of the protest sites, mostly for children who are unable to attend school due to financial issues and the ongoing Covid-19 pandemic. When the rulers want to divide people on various counts, the farmers and other sections of the society are putting up a united front.

Mahapanchayats organised by local farmers and attended by leaders have established that all citizens are together to defeat this government. One of the statements often heard in such meetings is “we regret having voted BJP to power”.

Farmers’ movement also taught a lesson to not pay heed to the irresponsible utterances of the politicians and government officials. Union Minister Piyush Goyal said the agitation no longer remained a farmers' movement as it has been "infiltrated by Leftist and Maoist elements." This, he said, was clearly to derail agriculture reforms brought by the government. The Railway Minister should have been concerned about restarting train services, instead of blaming the farmers.

Historically, Mahatma Gandhi was one of the leaders who kept his focus on rural India and agriculture. Gandhian thought highlighted the fact that agriculture would prosper only when farming communities are able to feed themselves and their neighbours and are able to supply decent surplus to urban areas. When we have good agriculture, agro-industry, and non-farm cottage industry in rural areas, that’s when agriculture will prosper.

But politicians, instead of promoting rural India and agriculture opted to ape the West and gave priority to industrialisation. While modernisation, industrialisation and urbanisation grew over a period in western countries, in India, these were as if short circuited. Though governments after governments paid lip service to rural India, farmers and agriculture, none of them really gave impetus to the struggling farming sector. Individuals and non-governmental institutions tried to introduce agro-industry, but lack of finance and due to corruption, even these efforts were defeated.

Coming from another background and thought process, Dr. B.R. Ambedkar persuasively argued in an article that the solution to rural stress is rapid industrialization. He argued that land was only one of the many factors of production and the productivity of one factor of production is dependent upon the proportion in which the other factors of production are combined.

As a remedy to rectify the agricultural sector of India, Dr. Ambedkar suggested nationalisation of land. After observing the unequal holdings and persistence of tenancy with unfair rents and uncertain tenures, Ambedkar came out with radical solution of nationalisation of land and collective farming. He felt that neither consolidation of holdings nor tenancy legislation contributes for improving agricultural productivity. If this was done then, it would have brought in change in Indian agriculture and would have saved farm and farmers being subjected to the dictates of corporates.

It needs to be reiterated that a scared government takes to false propaganda, blame game, finding fault with the Opposition, fake news of security threat etc. to deal with a massive agitation against it. A desperate and despondent government hides behind ‘Toolkit’ hysteria by arresting a 21-year-old environmental activist. May Shaheed Bhagat Singh, Gandhiji and Ambedkar continue to inspire the people to stand together to re-establish an inclusive, egalitarian and democratic India.