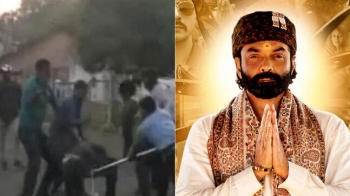 Day by day India is becoming a highly intolerant and hate-filled country because of the impunity with which the right wing groups spread fake news with hate messages, give threats to those who do not agree with them and indulge in violence against the minorities. The police instead of protecting people, who are the victims of violence and hate speech, often remain indifferent or overtly or covertly support hooligans. If rule of law is fundamental to democracy, India is failing in establishing rule of law. On the contrary laws, like sedition law, UAPA, National Security Act etc, are being used to harass citizens who use their democratic rights to protest, and the investigating agencies use the draconian laws to arrest persons who are either critical or not supportive of the government.

Many violent incidents that have taken place since 2014 show that hatred and bigotry have become normal. The latest in a series of incidents is ransacking by Bajrang Dal activists the sets of “Asharam-3”, a web series, produced and directed by Prakash Jha. The protestors threw ink on Prakash Jha and pelted stones, according to a police officer. The Bajrang Dal activists claim that the web series hurt the sentiments of Hindus, as it contains obscene scenes. According to the police, the windscreens of two buses were damaged due to stone-pelting and one person was injured. But no person has been arrested.

Some organizations and persons related to the film industry have condemned the incident and asked the authorities concerned to take action against the hooligans.  The Producers Guild of India and Federation of Western India Cine Employees (FWICE) criticised the attack. The former strongly condemned the “brazen acts of violence, harassment and vandalism” faced by the crew. The organization reminded the authorities that it is not an isolated event. The guild said that it is alarmed to note the frequency with which both the production and exhibition sectors are severely and illegally disrupted by various elements with impunity.

Producer Pritish Nandy tweeted, “There appears to be no end to these kinds of attacks. It is time the ministry spoke out and reined these guys in. They are running amuck.”  Swara Bhasker, Hansal Mehta and others also condemned the attack. At the same time, there has been no concerted action by the film industry. It seems that the government has succeeded in dividing the Bollywood on ideological basis. The silence of many super stars vindicates that they are either frightened or they are lured by the ruling dispensation.
Instead of taking strict action against the law breakers, the Home Minister of Madhya Pradesh indirectly supported them. He said that the state government would issue new guidelines for film shoots in MP, where the script has to be submitted to the administration, if there is any objectionable scene or content that could hurt religious sentiments. He also expressed his objection to the name ‘Asharam’.

The second incident is the furore over the Fabindia advertisement. Fabindia is an all-India clothing and furnishing brand known for its ethnic products. In view of the Diwali festival season, it posted a promotional tweet advancing its 2021 Diwali Collection. The “contentious” caption read as follows: “As we welcome the festival of love and light, Jashn-e-Riwaaz by Fabindia is a collection that beautifully pays homage to Indian culture.” The fanatic groups tweeted threatening Fabindia for using Urdu phrases in the advertisement.
Tejasvi Surya, the national president of BJP Yuva Morcha, accused Fabindia of Abrahamisation of Hindu festivals. In his tweet he threatened that Fabindia “must face economic costs for such deliberate misadventures". “Deepavali is not Jashn-e-Riwaaz. This deliberate attempt of abrahamisation of Hindu festivals, depicting models without traditional Hindu attires, must be called out."

Other tweets accused Fabindia of hurting Hindu Sentiments. Following the social media outrage, Fabindia withdrew its “controversial” tweet. Thus Fabindia caved in to the unreasonable and bizarre objections of the fanatical groups. This is not the first time that a big business firm bent before hooligans. Last year, Tanishq, owned by the Tata group, pulled a very relevant ad showing a mixed community home.

It is really shocking that a multicultural, multilingual and multi-religious India has reached such a stage that the use of an Urdu phrase to depict a festival has become objectionable. Urdu is one of India’s officially recognized 22 languages and it is of Indian origin. Urdu is profusely used by Bollywood. The Mughals used the phrase Jashne-e-Charaghan or festival of lamps, to describe Diwali. But the Hindutva project sees Urdu as Muslim language. Making Urdu invisible is part of the larger project of marginalizing the Muslim community.
Siddharth Varadarajan in an article in Wire has mentioned an objection raised by a prominent online Hindutva activist who said that those who refer to Diwali as the “festival of love and light” are guilty of “de-Hinduising it. Varadarajan writes that Indian embassies in Spanish speaking countries routinely call Diwali a “Festival de las Luches”. According to him, the BJP has made Diwali a festival of hate.

Tanishq and Fabindia have pulled down the ads because they know that India is not ruled by “rule of law”. They are also aware that the pro-government groups can easily resort to violence against their outlets and employees and they may not get police help in time. They also know that if they are not on the side of Hindutva groups they could be targeted in many ways. A police case for “hurting religious sentiments”, a tax raid or a case by the Directorate of Enforcement could be the result, and they have to spend years in fighting cases.

No one from the Sangh Parivar members has advised the right wing groups not to indulge in such actions that bring bad name for the nation at international forums. On the contrary, the leaders who do moral policing by indulging in hate speech and violence get promotion in the organizational hierarchy of the Sangh Parivar. Thus hate and bigotry have become not only a strategy to depict the minorities as threats to the majority community but also a means for the members of the right wing groups for moving on the leadership hierarchy.

The arrest of Aryan Khan, son of Hindi movie super star Sharu Khan, by Narcotics Control Bureau (NCB) has been one of the main news on the TV Channels and social media platforms for about a month. The various developments that have taken place since his arrest on October 2 have signalled that the arrest could be a strategy to defame the Bollywood superstars and perhaps to extort money. There is an allegation by Nawab Malik, an NCP minister in Maharashtra Government, of extorting money from the super star by the regional officer of NCB, Sameer Wankede. He also alleged that the NCB's raid on the cruise was ‘fake’ and the BJP was using central agencies to “defame Maharashtra, the Maharashtra government and Bollywood.”

The pattern of the arrest and the denial of bail by the lower court appear to be a reply of Riya Chakroborthy’s alleged involvement in the suicide of her boy friend Sushant Singh Rajput and her arrest and incarceration in jail by NCB. The NCB could not prove that Riya was supplying drugs to Sushant Singh and drug consumption was the cause of his suicide.

According to Aryan’s lawyer Mukul Rohatgi, Aryan Khan’s arrest is “arbitrary” and Aryan Khan was wrongfully arrested since there was no “consumption or possession” of drugs. The case against Aryan Khan is based on old Whatsapp chats that were irrelevant and had nothing to do with the cruise case.

Against the backdrop of the arrest of Aryan Khan, Political Scientist Pratap Bhanu Mehta in his article, “What is the harassment of Aryan Khan really about?” has pointed out three characteristics of the current political scenario.

“First is the expansion of the empire of fear and cruelty. The jailing of young students in CAA-related cases, the continued detention of many of the Bhima Koregaon accused, the targeting of Bollywood celebrities and even the intensifying threats of using the Enforcement Directorate are all meant to send a signal, to create a generalised climate of fear, where everyone feels vulnerable”.

“Second, there is an ideological war on constructed “Muslimness”, which now has an ever-expanding definition. It starts with making Muslim religiosity invisible in public spaces. Now it is expanding to curbing cultural articulation, from food to Urdu to Muslim celebrities. And then the ultimate subliminal fear: How dare Indians, especially women, identify with Muslim heroes? It is hard to imagine being a minority and not being anxious”.

“Third, there is the ideological war on Bollywood: To move it from a broadly secular and patriotic cultural institution to a communal and jingoistic one. Every star must now be dimmed by an ideological shadow”.

The opposition political parties know about the danger at the doorstep. The slide of India from a liberal constitutional democracy to an illiberal electoral autocracy is being witnessed by all. Still the political parties, because of their selfishness and ego-centrism, are not ready for a concerted action. The concerned citizens of India cannot become disillusioned. Let the civil society, consisting of intellectuals, activists, writers and professionals come forward to liberate the country from the present situation of hatred, division and fear. Let them take inspiration from  what Rabindranath Tagore sang many years ago.

“Where the mind is without fear and the head is held high;
Where knowledge is free;
Where the world has not been broken up into fragments by narrow domestic walls;
Where words come out from the depth of truth;
Where tireless striving stretches its arms towards perfection;
Where the clear stream of reason has not lost its way into the dreary desert sand of dead   habit;
Where the mind is led forward by thee into ever-widening thought and action
Into that heaven of freedom, my Father, let my country awake”.