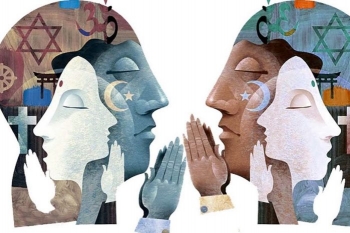 Life is the Centre, not Religion

The title being considered here has two parts, the first focuses on life and the second, on religion. The former affirms ‘life’ as the centre and the latter negates ‘religion’ as centre of life. Both life and religion cannot be at the centre. They are not on the same level, too. The centre has been reserved for ‘life’, from time immemorial. I believe, it has to necessarily continue to be so for all times, as well.

The Creative power, which we call God, is ‘life’ in its essence and basic form. He, she or it is the life-giver or the source of life, for everyone and everything. The act of creation by God has been the ‘sharing of life’ with the creation, in all its various forms, vegetation, animals and human beings, all alike.

In special, we humans have received life from the life-giving power of God. We are invited to live it ‘to the full’, ‘with the whole heart, the whole mind and the whole spirit’. We are called upon to explore the magnitudes and altitudes of life, in all possible dimensions and degrees. Of course, life has to be surrendered to the owner and author of life when it can no more be sustained on earth.

Life could be understood in two dimensions. The ‘life within’ or the ‘being’ that causes the ‘breath’ and the ‘heart beats’ is the first aspect. The ‘totality of life’ or the details of life lived from birth to death is the second aspect of life. They cannot be separated from each other, too. They go hand in hand. In either case, life is the generous gift of the Creator, along with all its various possibilities.

Religion, to be specific, is similar to ‘good cholesterol’ and ‘bad cholesterol’ in the body. There are good and bad elements in religion. Good elements have to be imbibed and promoted. Bad elements require being eliminated, too. In other words, religion is like a double-edged sword. It cuts on either side, for both good and bad purposes. Besides, religion may benefit some people and not benefit some. Accordingly, it could either be a ‘blessing’ or a ‘liability’ to the society. This double-sided character of religion cannot be ignored.

There is no denying the fact that religion has incredibly advantaged the humans. Religion has brought lots of ‘meaning’ to the human civilization, in diverse ways and world over. It has given people lots of ‘values’ to live by. It has also helped a battalion of people to ‘hope, even against hope’ and live on. It has motivated millions and millions of people to leave all that the world offers them and ‘live for the larger good’ of life, in view of adding quality to the lives of others, the nation and the larger society.

On the other hand, it is also equally true that the most brutal ‘wars’ of the world have been instigated, supported or at least passively tolerated by religion, unfortunately so. ‘Religious academics and theological interpretations’ of the different religions have ‘divided’ believers of the same God into various factions, almost beyond compromise. Religious perceptions have cracked human relationships. To say the last, religion has created a lot of foolproof boundaries among the humans, landing them even in a state of bitter animosity and homicide.

It is certainly understandable that religion cannot be perfect. There is no ‘hundred percent’ in this world. Everything is limited, incomplete and short-lived, including life. In point of fact, religious traditions have emerged from great seers and prophets of the world. But, like streams that had their water pure at the source and as they flew on, they accumulated filth of various types. The short vision and private interests of the followers have added to the ‘worldly’ character of the religions, well, ‘political and economic overtones’, regrettably so.

Given the above predicament of the religion, thinking in terms of considering religion the centre of life would mean a ‘topsy-turvy of affairs’ as regards human lives. It is like ‘cutting the limbs of the body to suit the ready-made coat’, instead of shaping the coat to suit the body. It violates the logic of life, with which it is designed. Such an attempt would mean disorienting life, which is a ‘disgrace’ to the author and owner of life.

‘Making religion the centre of life’ is the source of all havoc in the world, like discrimination, division, social distance, hatred, lynching, war and even massacre. Religion-centred understanding of life has divided the nations and messed up the human society. The ‘off the track notion’ of religion has caused exaggeration, unhealthy competition and rivalry among communities and nationalities as well as neighbours, co-workers, and even among friends.

In addition, most of the natural processes of life have hardly anything to do with religion. The air one breathes, the water one drinks, the house one lives in, the cycle of day and night one is encircled in and the car one travels in have no religion. Life, love, smile, help, work, friendship, happiness, sorrow, sleep, success, prosperity, poverty, and the like, have no religion, as well. They are among the multifarious ingredients of life and are above religion and apply equally to all human beings, observably so.

Therefore, religion has to be kept in its right place in the society, in view of making it truly relevant and meaningful, along with avoiding confusion and calamities. ‘Dethroning life’ for ‘enthroning religion’ is sure to make a thorough ‘tragedy’ out of life. If this happens, it will not only be an abnormality, but will be a major insult to the ‘dignity of life’ that was endowed by the Creator as he shared it with the humans and with the rest of the creation. It will be a ‘crime against life, humanity and divinity’, all at the same time, as well.