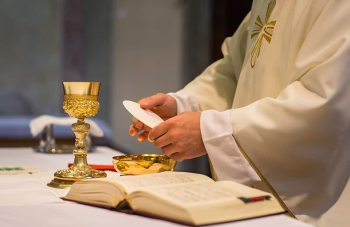 Living the Eucharist Unites the Followers of Jesus

When the mode of offering the Eucharist has become a bone of contention and a cause for division in the Syro-Malabar Church, it is pertinent to reflect how Eucharist can be made a living experience to unite the followers of Jesus. Redemption or salvation of mankind is an on-going process and Jesus has shown the way of salvation by his life and teachings as recorded in the Gospels. According to the Gospel of Mark 3:14-15, Jesus chose the twelve disciples to be with him and to be sent out. In other words, the disciples of Jesus are expected to internalize his vision and values and to continue his mission. Internalization of the vision and values of Jesus takes place through contemplation on the word of God in relation to the context.

Commitment to Jesus’ vision and teachings, especially his value system and the passion to continue his mission unite the disciples of Jesus. As we read in the Gospels, during his last fellowship meal with his disciples, Jesus took bread, blessed it and gave it to his disciples. He then took the wine, blessed it and gave it to the disciples and told them to do it in his memory. Eucharistic celebration is an effective means to recollect and relive the life and teachings of Jesus and thereby recommit oneself to follow the way of Jesus and carry on his mission. The Eucharistic celebration reminds six significant aspects of the life of the followers of Jesus.

Six parts of the Holy Mass according to the Latin rite are: 1) Penitential service; 2) Word of God; 3) Offertory; 4) Consecration; 5) Holy Communion; and 6) Thanksgiving. The order of these six components is different in the Mass according to the Syro-Malabar rite, but these components are found in both the rites. These six components symbolize or signify six core values of Jesus’ teachings, which can definitely enrich the spiritual life of a follower of Jesus. The values symbolized by the Eucharist are forgiveness and reconciliation, commitment to the service of God and fellow human beings, altruism, availability, sharing, inclusiveness and attitude of gratitude.

The first part of the Mass is penitential service that invites the participants to reconcile with each other. Through various parables and by his own example of praying for his enemies while hanging on the cross, Jesus highlighted the paramount importance of forgiveness and reconciliation. Nursing enmity and hatred chocks one’s creative energy and makes a person think and act negatively. Hence forgiving and getting reconciled with one’s adversaries is a basic requirement for a peaceful life. Jesus has unambiguously told his followers that if someone comes for offering sacrifice and if she/he remembers that somebody has ill feelings against him/her, he/she has to leave the sacrifice and first get reconciled with the person who is estranged (Mt. 5:23-24).

Forgiveness and reconciliation are non-negotiable in the value system of Jesus. Therefore, if anyone participates in the Eucharistic celebration without being reconciled to others, he/she brings condemnation on himself/herself, according to St. Paul. “It follows that if anyone eats the Lord’s bread or drinks from his cup in a way that dishonours him, he is guilty of sin against the Lord’s body and blood. So then, everyone should examine himself first, and then eat the bread and drink from the cup” (1Cor. 11:27-28). To be worthy of participating in the Eucharist, reconciliation is a must.  Without reconciliation and forgiveness Eucharist will become an abomination.

There cannot be unity in Christian communities without forgiveness and reconciliation. Imposition of uniform laws on the members of the Church will only create discord and divisions. If the followers of Jesus, especially the bishops and priests, offer Mass without reconciling with their brethren who are wounded or hurt, they are bringing condemnation on them. In other words, they are causing a great scandal to the members of the Church.

The second part of the Mass is reading the word of God. Simply reading from the Bible two or three portions will not be of any use, unless and until the participants of the Mass reflect on the word of God, draw insights from them and apply them to their life. For example, what message can I carry home after listening to the Gospel passage about the woman caught in adultery? When she was brought before Jesus by the Scribes and Pharisees, Jesus told them, “Whichever one of you has committed no sin may throw the first stone at her.”

Jesus questioned the law that was discriminatory to women. Adultery cannot be committed by a woman alone; a man is definitely an accomplice in any case of adultery and why only the woman is punished? “As a disciple of Jesus, I will not discriminate against women and I will give equal honour to women. I will question if anyone indulges in any discriminatory practice against women”. This could be the message one can take home. When the followers of Jesus contemplate on the word of God, they will be guided by the values of Jesus and they will be living in peace and harmony not only among themselves, but also with people of different faiths.

The third part of Eucharist is offertory. During the offertory, the priest and the participants of the Eucharistic celebration are expected to offer themselves to God.  The offering in the Eucharist is nothing but the offering of all our resources: our talents, capacities, wealth, material resources and time. After participating in the Eucharist, I cannot keep my resources only for myself, but they are to be used for me, my family members and all human beings, especially the needy. If my neighbour is hospitalized and there is no one to be with the patient in the hospital I volunteer to be with him/her. If a guest comes to my house in the middle of the night, I joyfully go to the railway station to receive him/her, breaking my sleep.

After participating in the Eucharist, the followers of Jesus cannot be insensitive to the needs of others. Availability to others in spite of one’s busy schedule is an explicit sign of living the Eucharist. It is a contradiction that many people who participate in the Mass daily remain insensitive and indifferent. The rich man in the parable, ‘the Rich Man and Lazarus’, was punished by God because of his insensitivity.

The fourth part of the Eucharistic celebration is consecration. The Catholics believe that through consecration bread and wine are transformed into the body and blood of Jesus. Bread is made by powdering many wheat grains and wine is made by crushing a large number of grapes. Both wheat and grapes lose their identity in the process of being made into bread and wine. As a result of taking part in the Eucharist, the disciples of Jesus are expected to undergo a radical transformation, annihilate their ego and give up petty identities in order to become the heralds of the Kingdom of God.

In the context of India today, the followers of Jesus have a great responsibility to rise above their identity as Catholics and Christians and function as agents of peace and harmony among the different communities and castes. When politicians use religion to divide people and make them fight each other, the followers of Jesus have to challenge the divisive politics by promoting harmony and understanding among the followers of different religions.  Participation in the Eucharist should make them courageous to fight against religious fundamentalism within the Christian community as well as in other religions. Lack of openness and respect towards other religions is the result of religious fundamentalism.

The fifth part of Eucharistic celebration is communion. Communion is the process by which Jesus becomes part and parcel of the personality of the faithful; a fusion of the divine and the human takes place. It is nothing but a reaffirmation of the basic nature of the human person who is created in the image and likeness of God. Simultaneously communion is strengthened among those who participate in the Eucharist because of the presence of the same Jesus, the same Divine in every person. There is no discrimination at the Eucharistic table because all receive the same Jesus. Communion is an invitation to all those who participate in the Eucharist to build inclusive communities or to transform the communities into inclusive ones by removing all kinds of discrimination and exclusions. If there is genuine communion, how can the members of the Church fight on the mode of offering Mass?

The sixth and the last part of the Eucharistic celebration is thanksgiving. While thanking God for all the blessings we have received from God, we are also reminded of the task of making life a song of thanksgiving. The key to a happy and contented life is a grateful heart. Experiments have shown that persons with a grateful heart are found to be happy even in the midst of crisis.

Ritualism, legalism and dogmatism are the obstacles to growth in spirituality. Because of the obsession with these three fundamentalist tendencies, the followers of Jesus are not able to live the Eucharist 24X7. History is a witness to the fact that these three tendencies have been the main causes of conflicts and divisions in the Church. Today also these tendencies are creating havoc in the Church. The Eucharist is to be lived and the cross is to be carried. When the followers of Jesus start living the Eucharist, they will be able to resolve conflicts among them amicably and live in harmony and unity.