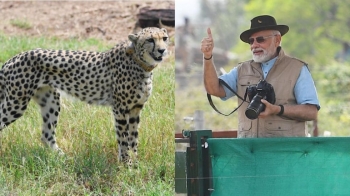 Release of eight Cheetahs, brought from Namibia, by Prime Minister Narendra Modi on his 72nd birthday on 17th September, was celebrated by the media and the government as if it is going to transform India. While releasing the cheetahs the Prime Minister said, "Project Cheetah, under which the cheetahs were reintroduced in the country after they became extinct seven decades ago, is our endeavour towards environment and wildlife conservation." He also said, "21st century India is giving a message to the whole world that economy and ecology are not conflicting fields."

Wild life protection is an important aspect of environmental conservation and there is nothing wrong in reintroducing a species that became extinct in India in 1952. But one has to think whether it should be a priority in the context of India. Definity, the fanfare with which it was organized and the huge amount of money spent on the event could have been avoided, when people of India are experiencing acute unemployment and rising prices. There is some sense in what the Congress leader Jairam Ramesh said about the event. It is an “unwarranted and yet another diversion from pressing national issues.” Rahul Gandhi, who is on a 3500-km padayatra, tweeted on 17th September, “Eight cheetahs have come, now tell why 16 crore jobs didn’t come in eight years”.

NDTV News had published on 17th September a write up on the life situation of the people living in the villages around Kuno National Park. In the area where the Park is located, there are about 23 villages that are struggling with poverty and malnutrition. NDTV News reporter travelled to Kakra, one such village located between Shivpuri and Sheopur. In Sheopur district, more than 21,000 children are suffering from malnutrition, the Madhya Pradesh government has admitted in the Assembly. Two weeks ago, a girl child died of malnutrition in the same district. Malnutrition was officially eradicated here, as officials removed the name of starving children from the list as soon as they turned five. People of the area where the Kuno National Park is located have no clue how the release of eights cheetahs into the forest is going to change their life situation. On the contrary, they have apprehensions about their future.

Very often the leaders become insensitive to people in whose name they are in power. It happened in monarchies and dictatorships. Some monarchs exploited their people to satisfy their whims and fancies, thereby inflating their egos. Larry Collins and Dominique Lapierre have depicted in their book, Freedom at Midnight, some of the whims and fancies of certain kings in India during the British rule and how they were insensitive and neglecting the basic needs of their people.

In a democracy, the rulers are called ministers and Prime Minister Narendra Modi is proud of calling himself ‘Pradhan Sevak’. But some of his policies and actions do not appear to be in tune with the ‘Pradhan Sevak’. Implementation of the Central Vista project during Covid 19, in spite of the vehement opposition by most of the opposition parties and Civil Society Organizations, is considered as the insensitivity of the Pradhan Sevak. Purchase of two aircraft costing Rs. 8,400 crores for the travel of the Prime Minister is also criticized by many as an extravagance.

Against this backdrop, it is pertinent to reflect on the priorities of a developing country like India. The development of a country can be assessed from different perspectives like economic growth, military power, expansion of infrastructures like roads, airports, etc. But the most critical factor in the development of a country is its human resource. If human resources are not developed, the development in other sectors will not be sustainable. Hence, focus on human development is crucial for India, which is aspiring to become a developed country by 2050, according to the Prime Minister.

The HDR 2022 is a mirror to India to see where the country stands in terms of human development. Although economic growth is needed for generating wealth to be spent on health, education, skill training, etc., it is not the only measure of development. First of all, economic growth should lead to generation employment. Growth without employment creation will only lead to concentration of wealth in a few hands. The growth story of India shows that the disparity between the rich and the poor increased especially during the years 2020 and 2021 when millions of people were pushed to poverty due to Covid 19.

According to the World Inequality Report 2022 prepared by World Inequality Lab, the top 1% and 10% of the population of India owns respectively 33% and 65% of the country’s total wealth while the bottom 50% owns a meagre 5.9%. India has 166 billionaires and the wealth of the top 9 billionaires is equal to the bottom 50% of the Indian population. This situation is not going to be sustainable. Government has to bring in policies to tax the rich in proportion to their income growth and make use of the additional revenue on education and health.

In 1996, the Kothari Commission had recommended spending 6% of the GDP on education. Unfortunately, the spending on education was around 3 percent during the last one decade. The budgetary allocation for education in 2021-22 by the Union government and the states combined was about 3.1% of the country’s GDP. The new education policy will remain a mirage without enhancing budget allocation for education. More and more privatization of education will only increase the educational gap between the rich and the poor, making the poor, poorer.

In this context, an initiative taken by the Tamil Nadu government under Chief Minister Stalin is a right step in the right direction. A government survey had found that 25% of students attend school without having breakfast. In order to respond to this situation and to encourage children to attend school and concentrate on studies, the Stalin government decided to provide free breakfast to students in primary schools. It is expected to cost Rs. 12.75 per student. The scheme is expected to benefit 1.14 lakhs students in class 1 to 5 across the state. Along with this initiative, the TN government has also launched remedial measures like Illam Thedi Kalvi (Education Reaches Home) and Ennum Ezhuthum (Arithmetic, Reading and Writing) to compensate for the loss of educational outcomes during the period of Covid 19. The Stalin government is aware of the fact that quality education is a key to empowering the masses and it is also a political campaign tool.

Health is a very crucial factor in human development and it is the duty of the government to provide health care facilities to all citizens. The National Health Policy of India, which came out in 2017, envisaged that India spends at least 2.5 percent of its GDP on the health sector by 2025. But the actual spending in 2020-21 on health was only 1.8% of the GDP. Increased privatization of the health sector is converting it into an opportunity for big business. Commercialization of the health sector will be detrimental to the development of India.

Along with increased allocation of funds, systems and processes are to be put in place so that the funds allotted for education and health are utilized properly and efficiently. The investigation agencies have to see that the funds earmarked for education and health are not syphoned out by the corrupt elements. Instead of focusing on corruption only in the opposition-ruled states, they have to be active and vigilant in all states, irrespective of the party in power.

These days the Prime Minister has been emphasizing on the duties of citizens in order to make India a developed country. Along with duties, citizens have rights guaranteed by the Constitution and it is the duty of the council of ministers headed by the Prime Minister that the rights are accessible to all people. The Human Development Report 2021/2022 is a reminder to all leaders, especially the representatives elected by the people at all levels, of their duty to the people. Providing quality education and good health care to citizens is not “freebies”, but it is the right of the people. The Union government that is very much concerned about “freebies” has to think about the ways and means to reduce expenditure on extravagant programmes of the ministers and government functionaries.