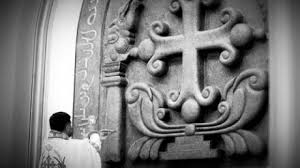 The acclaimed Malayalam film Mrigaya (1989) had won Mammootty Kerala State ‘Best Actor’ award for his performance as sharpshooter Varunni. The film was located in a settlement town with a mixed population living under the constant fear of a man-eater leopard prowling in the forests bordering it. The film also had a Catholic priest played by Thilakan as a central character, with Christian values of forgiveness and compassion at the core of it.

The film was scripted by A.K. Lohithadas and directed by IV Sasi, and the major parts played by Mammootty and Thilakan – none of them hailing from the Christian community. It’s uncanny how people of other faiths often judge Christian values better than Christians themselves. But, of late, there has been a sea change in the way people of other faiths look at the Church in Kerala.

The fundamental question as to who is Christian is a moot point. Does ‘being Christian’ mean being ritualistic, following the Ten Commandments or, is it more than sacramental? It is only logical to assume that a Christian is someone who follows Jesus Christ, and imbibes the spirit of Jesus Christ’s teachings. According to the Bible, followers of Jesus Christ were first called ‘Christians’ at Antioch. “…for a whole year Barnabas and Saul met with the church and taught great numbers of people…” (Acts-11:26). They were identified as ‘Christians’ because their speech and actions resembled Christ.

Thomas A Kempis’s The Imitation of Christ, perhaps the most read Christian devotional book after The Bible and a popular handbook for Indian priests, is misleading in that it gave greater importance to the devotion of the Eucharist than the active imitation of Christ.

There are very many references to the ‘imitation of Christ’ or ‘life in Christ’ in Paul’s Epistles and, theologians such as Saint Augustine deemed it central to leading a Christian life.

Saint Francis of Assisi took it one step further by advocating poverty and a Spartan way of life, imitating Christ physically and spiritually. It would be interesting to reflect how much of Christ’s core values beyond the sacramental are held by his ministers today, especially in an era when a socialist Pope Francis is heading it. The Catholic priesthood, instituted by Christ at the Last Supper, is not seen as a vocation but a calling.

Today, the organised nature of the Catholic Church and materialistic influences have perhaps lulled a section of the clergy into leading a mechanical life, going through the motions of a pre-ordained path. The onset of Covid-19 shook things up a bit, but this phase probably did not have a uniform contemplative effect. Where spirituality fails, the baser instincts come forth, and the sudden shrillness and viciousness among a section of the clergy in putting their point across in the Kerala Church is in poor taste.

The growing sense gulf between the Abrahamic faiths in Kerala is a perplexing reality today. If we were to examine how the Catholic Church addressed this issue, the invariable conclusion would be that the Church not only has not been conciliatory, but has actually facilitated alienation. Rather than douse the flames of growing distrust, the Church has ended up inflaming it. What could be the underlying reasons for that?

It would seem that post-liberalisation, the Church in Kerala has also taken the route of western nations and the increase in prosperity has been inversely proportional to the missionary spirit among its clergy. Gone are the days when you would come across random priests in remote villages serving with the utmost sense of duty and a sense of devotion to humanity. The materialistic urges seem to have caught on, with the missionary zeal being a casualty in the process. Perhaps that explains the sheer disdain for the pastors and brethren who serve in India’s tribal areas by the Catholic clergy in Kerala. In chapter 9 (49-50) of the gospel of Luke, John tells Jesus, “We saw someone driving out demons in your name and we tried to stop him, because he is not one of us” and Christ replies, “Do not stop him, for whoever is not against you is for you.”

The loss of missionary spirit and contempt for independent pastors serving among the tribals and hostile environments in the Hindi heartland has a co-relation with the growing Islamophobia within Kerala’s Church. It seems the loss of spiritual fervor has made them feel insecure at the face of the advancement of Muslims in various spheres. It’s usual to come across Syro-Malabar priests speaking contemptuously of missionary work, almost forgetting that spreading the gospel is their mission, if not a vow. Mathew 28:19-20 makes it abundantly clear, “Go therefore and make disciples of all nations, baptizing them in the name of the Father and of the Son and of the Holy Spirit, teaching them to observe all that I have commanded you; and lo, I am with you always, to the close of the age."

When you lose your spiritual aura, it’s only natural to behave like politicians rather than God’s ministers. There was a time when parish priests were looked upon as people of authority, often acting as mediators and doing their bit as part of the civil society. Not only have they lost their command over the society, the general public don’t respect them the way as they did a couple of decades ago. By acting and behaving as narrow-minded community leaders, they have lost their writ to make bi-partisan appeals to the society.

No wonder their speech begins to resemble Rashtriya Swayamsevak Sangh (RSS) Chief Mohan Bhagwat’s, who called for a blanket ban on conversions for purposes of marriage. Recently a prominent Carmelites of Mary Immaculate (CMI) priest spoke about an ‘Ezhava Jihad’, of a conspiracy by members of the sizeable Ezhava community in Kerala to woo and marry girls from the Syro-Malabar Church. While the priest promptly apologised saying it was a private pep talk meant for catechism teachers, it only exposes the mindset behind it. It seemed as if he felt responsible for Christian girls opting to go for inter-religious partners. The question is why the Church should feel culpable when people make their life choices out of love?

Perhaps some of them ought to re-read the Bible to decipher what Jesus Christ meant when he encapsulated the spirit of the Ten Commandments into two and what he meant by loving thy neighbor as thyself. Most importantly, the Kerala clergy should re-examine where they lost their missionary zeal and spiritual fervor. As long as they don’t make examples of themselves, it would be hard to expect the sheep to follow them in earnest.