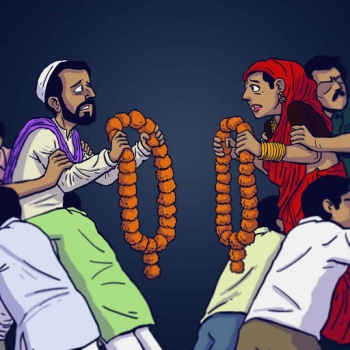 Love Jihad : A Ploy to Alienate

Five BJP ruled states are mulling to bring in a law to disallow ‘love jihad’, a term coined by the Sangh Parivar for mixed marriage between a Muslim man and a woman of other faith. The allusion of this terminology is that Hindu girls are attracted under the pretext of marriage and they are converted into Islam. In other words marriage is used as cover up for religious conversion by the Muslims. According to Wikipedia, love jihad is an Isalamophobic conspiracy theory that Muslim men target women belonging to non-Muslim communities for conversion to Islam by feigning love.  The Madhya Pradesh government has already decided to make ‘love jihad’ a non-bailable offence. According to the M P Home Minister, the law will be passed in the winter session of the Assembly.

The Sangh Parivar in its efforts to polarize the Hindus has devised many strategies and coined communally charged terminologies from time to time. In order to tarnish and devalue secularism they invented the terminology called ‘pseudo secularism’. Those who are familiar with the strategies of the Sangh Parivar can easily understand that the real purpose of the ‘love jihad’ propaganda is not to prevent religious conversion but to restrict the freedom of a woman to choose a life partner of her choice along with creating animosity against the Muslim community in the minds of the Hindus.

Although the concept of love jihad was brought to the attention of the public in India in 2009 with the alleged conversion first in Kerala and subsequently in Karnataka, there was no talk of enacting a law to deal with it. On September 29, the Allahabad High Court while declining to order police protection to a newly wedded couple-a Muslim woman and a Hindu man- said that religious conversion only for the sake of marriage was not acceptable. This statement of the High Court triggered a violent discussion on an issue that actually exists only in the wild imagination of the Sangh Parivar activists.

While electioneering for the by-election in the state, the UP Chief Minister, Yogi Adityanath said on 31st October that the UP government “will bring an effective law” to deal with the issue and promised that posters of those found involved would be put up on all crossings. His statement was followed by similar announcements by the Chief Ministers of Haryana and Madhya Pradesh, Manohar Lal Khattar and Shivraj Singh Chouhan.

The editorials of prominent English newspapers like The Times of India, The Indian Express, The Telegraph and The Hindu have severely criticized the totally unwarranted move by the BJP ruled state governments and exposed the futility and danger of such a move.

The Times of India in its editorial on November 3 titled, “Chasing phantoms: Outlawing something that doesn’t exist would be a novelty since love jihad remains unproven”, wrote that “laws against love jihad under consideration” display an “obsession with excessive legislation” but may have “no perceptible benefits”. It also pointed out that “the love jihad bogey is no less a negation of women’s agency. It treats women as gullible, defenceless participants in relationships”.

The Telegraph editorial said that targeting a particular community and keeping ‘daughters and sisters’ under control are two of BJP’s “favourite activities”. The Indian Express in its editorial titled ‘Law of Prejudice’ wrote on 4th November that the proposed law against ‘love jihad’ “degrades women and is unconstitutional over-reach and a paranoia about inter-personal relations that has no place in a democracy”.

As the editorials of the newspapers have boldly stated, ‘love jihad’ is only a metal creation of the BJP and its ideological mentor in order to hoodwink the people, especially the Hindus. BJP’s own minister denied the existence of ‘love jihad’ in the parliament on 4th February 2020. Junior Union home minister G. Kishan Reddy said in his written reply in the Lok Sabha: “The term ‘love jihad’ is not defined under the extant laws. No such case of ‘love jihad’ has been reported by any of the central agencies”. Reddy quoted Article 25 of the Constitution and said it provided for the freedom to profess, practice and propagate religion subject to public order, morality and health. Thus ‘love jihad’ is a bogey invented by the Sangh Parivar to malign members of the Muslim community and to widen the religious divide. In the words of Pratap Bhanu Mehta, it is “a communally insidious and infantilising construct”.

The allegation, that mixed marriages are motivated by religious conversion is not based on any reliable data. Before putting in place a law the government has to explore the intensity of the problem it wants to tackle by means of the new law. No such study or survey has been conducted either by the Central government or any state government. The Census does not provide any information about mixed marriages.

The Indian Express published on October 22 the gist of the findings of a survey called “The Indian Human Development Survey 2005 covering a sample of 41,554 households both from the rural and urban areas. It was jointly organized by researchers from the University of Maryland and the National Council of Applied Economic Research (NCAER), New Delhi. There was no direct question related to mixed marriages, but the religious affiliation of husband and wife was asked to find the number of inter-faith marriages. The survey suggests that 2.21 per cent of all married women between the age groups of 15 and 49 had married outside their religion. Christians had the highest percentage of mixed marriage (3.5%) followed by the Sikh 3.2 and the Hindus had only 1.5%. Hence mixed marriage is not a troubling issue that calls for a special legislation. There are hundreds of other issues that need immediate attention of these governments. ‘Love jihad’ is a trick to divert the attention of the people from pressing issues which the BJP governments are not able to tackle.

On the contrary, mixed marriages can contribute to the promotion of national integration. Article 51A of the Indian constitution enumerates the fundamental duties of Indian citizens.  To promote harmony and the spirit of common brotherhood (e) and to value and preserve the rich heritage of our composite culture (f) are two among the fundamental duties. Moreover, FRATERNITY is a core value of the Indian constitution and the government as well as all citizens of India have the responsibility to build, sustain and nurture brotherhood among the different sections of the society. The Special Marriage Act of 1954 is designed to facilitate mixed marriages.

In India, there are a good number of examples of mixed marriages where the couples belonging to different religions follow their respective religions after the marriage and give freedom to the children to follow the religion of their choice. In response to the withdrawal of Tanishq advertisement by Tata Group's Titan Company a few Hindu women married to Muslim families came forward and spoke openly how they are given the freedom to practice their religion and rituals. Griha Atul who is married to a Muslim family tweeted, “I'm married into a Muslim household which respects and accepts my religious identity. So the Tanishq advert wasn't a figment of any imagination. It's a reality of our times”.

The second objective of the BJP for racking up this issue is to curb the freedom of women. Perhaps this could be the ultimate objective of this drama. The RSS, the ideological mentor of the BJP, did not accept the Indian constitution when it was adopted. It vouched for a constitution based on Manusmriti. The Organiser, the Mouthpiece of RSS, had stated in the November 30, 1949 issue: “But in our constitution, there is no mention of the unique constitutional development in ancient Bharat. Manu’s Laws were written long before Lycurgus of Sparta or Solon of Persia. To this day his laws as enunciated in the Manusmriti excite the admiration of the world and elicit spontaneous obedience and conformity. But to our constitutional pundits that means nothing.”

Manusmriti, which is extolled by the Hindutva ideologues, advocates a hierarchical, caste based male dominated society. It contains a number of passages derogatory to women. A few examples are as follows.

•    “Woman is an embodiment of the worst desires, hatred, deceit, jealousy and bad character. Women should never be given freedom” (Manu IX. 17 and V. 47, 147).
•    “Wise people should avoid sitting alone with one’s mother, daughter or sister. Since carnal desire is always strong, it can lead to temptation” (2/215).
•    “Any woman who disobeys orders of her lethargic, alcoholic and diseased husband shall be deserted for three months and be deprived of her ornaments” (9/77).
•    “Girls are supposed to be in the custody of their father when they are children, women must be under the custody of their husband when married and under the custody of her son as widows. In no circumstances is she allowed to assert herself independently” (5/151).

To sum up, ‘love jihad’ is a double edged sword. It is a communal and patriarchal agenda of the Sangh Parivar in order to alienate and demonize the Muslims and enslave women of all communities. It is a violation of the noble values enshrined in the constitution of India and the fundamental rights guaranteed by it.